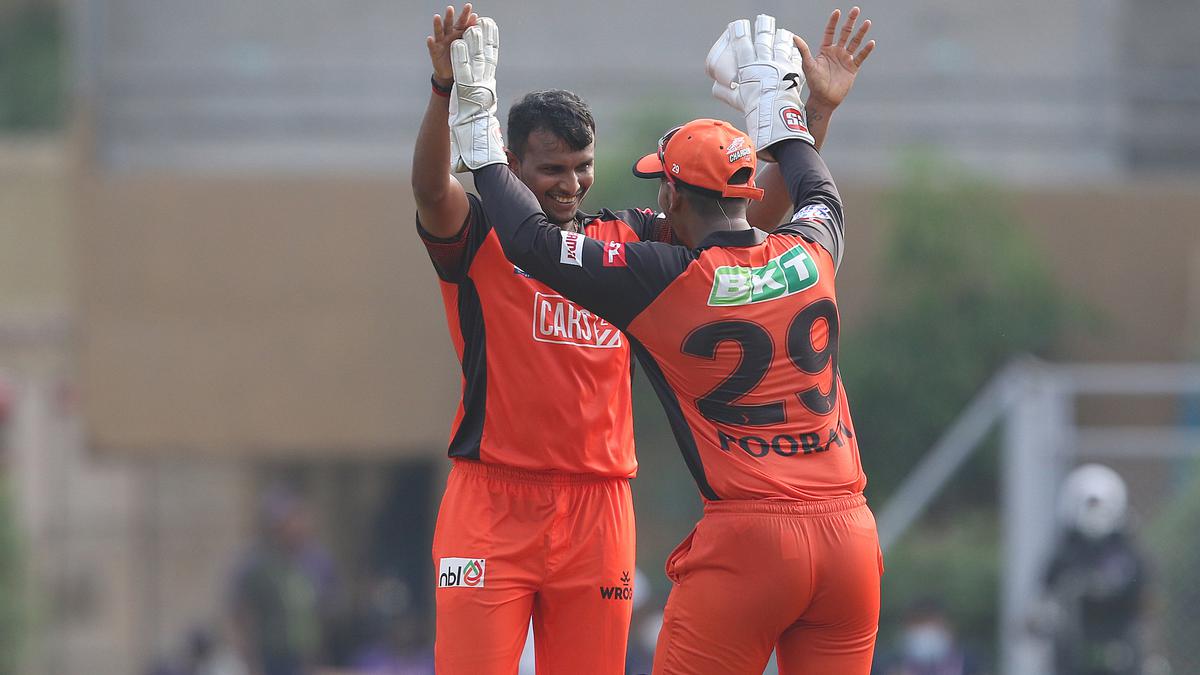 Serpentine queues, chants of ‘Thala, Thala ‘ and sounds of the vuvuzelas outside the DY Patil Stadium on Saturday afternoon were reminiscent of the iconic Wallajah Road in Chennai – home to the MA Chidambaram Stadium, the den of the Chennai Super Kings.

The sea of ​​yellow with cheering fans sporting the team colors made the team feel at home in the otherwise nondescript Navi Mumbai suburb. But in the end it did not prove to be enough as Sunrisers Hyderabad rode on Abhishek Sharma’s half-century to crush Chennai Super Kings by eight wickets in an Indian Premier League fixture.

After restricting Chennai Super Kings to 154 for 7, Sunrisers got off to a brisk start with captain Kane Williamson (32, 40b, 2×4, 1×6) forging an 89-run opening partnership with Abhishek (75, 50b, 5×4, 3×6). And that set the tone for the Sunrisers, who suffered consecutive defeats in their first two outings.

Chennai Super Kings, walking out to the field after three back-to-back defeats, made a change in its bowling line-up, with Sri Lankan Maheesh Theekshana replacing Dwaine Pretorius. However, that move did not work as Theekshana, who became only the first Sri Lankan to play for CSK since Nuwan Kulasekara in 2012, conceded 31 runs but failed to bag a wicket.

Walk in the park

And making the most of the lackluster bowling, Williamson and Abhishek steadied the ship. By the time Moeen Ali caught Williamson at short extra cover off a delivery from Mukesh Choudhary, Sunrisers was cruising at 89 for 1. After the captain’s departure, Rahul Tripathi rose to the occasion with a quickfire unbeaten 39 off 15 deliveries.

While Abhishek held fort at one end and brought up his maiden IPL half-century, the seasoned Tripathi went hammer and tongs at the CSK bowlers. In the 17th over of Chris Jordan, Tripathi hit him for a six and a four, while five runs came from a no-ball boundary.

In the 18th over, when Dwayne Bravo’s slower ball forced Abhishek to offer a catch to Jordan at long-off, SRH was just 10 runs away from the target. It was literally a walk in the park for the Hyderabad outfit as Tripathi sealed it with a boundary.

Earlier, a disciplined bowling performance from Sunrisers put CSK in a spot. After scoring 25 runs within the first three overs, CSK openers Robin Uthappa and Ruturaj Gaikwad failed to capitalize on the start. Attempting to slog-sweep a tossed up delivery from Washington Sundar (2 for 21), Uthappa ended up offering a catch to Aiden Markram in the mid-on region. Gaikwad, who had a poor outing in the tournament, was cleaned up by T. Natarajan.

Reeling at 36 for 2, CSK rebuilt, Moeen Ali (48) and Ambati Rayudu (27) forging a third-wicket stand of 62 runs. While that partnership did bolster the team’s chances, CSK let it slip with a middle-order collapse. Barring skipper Ravindra Jadeja (23 off 15 balls), none of the batters – including MS Dhoni – failed to step up.

After a couple of disappointing outings, the Sunrisers brought in Marco Jansen in place of Abdul Samad and the bowling unit appeared sorted as it conceded just five extras to put up a spirited show.

And with SRH ticking all the boxes, it was heartbreak for Chennai Super Kings fans. They dreamed of a comeback but ended up witnessing the team’s fourth defeat on the trot.