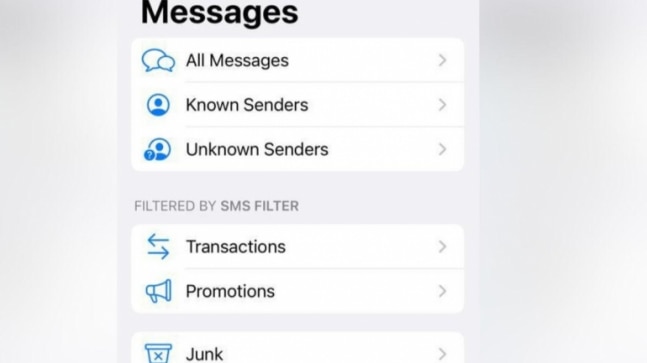 Apple iPhone’s new iOS 16 operating system is yet to reach mass users, though the beta versions are already available to developers. Its latest developer beta for iOS 16 (Beta 2) rolled out earlier this week, and it appears Apple is getting serious about spam SMS on the iPhone Messages app. Spotted by TechCrunch, Apple users in the US will soon see a ‘Report Junk’ option inside the Messages app under the Unknown Senders category. It will seemingly help users report spam messages, but the feature will only function with select carriers, though there’s no clarity on that.

It appears that users in India will not see this option yet; however, Apple is said to be improving its message filter system. With the rollout of iOS 14, the iPhone Messages app received several categories to separate SMS from known and unknown users. It also introduced ‘filtered by SMS filter’ that includes ‘transactions’ and ‘promotions’. Users also have the option to use third-party SMS filters by Truecaller. It needs to be enabled by heading to Settings > Messages > Unknown and Spam > SMS Filtering.

Indian iPhone users will reportedly get an extractable events feature in Messages to help users save movie or train tickets. These can be added to the Calendar Inbox, but the exact functioning remains unclear.

Meanwhile, the upcoming iOS 16 and macOS Ventura will introduce a new feature simply called ‘automatic verification’ to let users bypass annoying CAPTCHA and puzzles on several websites. It is developing a Private Access Token to let websites know the system accessing the platform is genuine and not a bot.

Apple will likely rollout iOS 16 to mass users in October or early November following the launch of the iPhone 14 series. Public beta testers will get access to the OS in July.

Also Read | Nothing Phone (1) revealed: 10 things we finally know about it