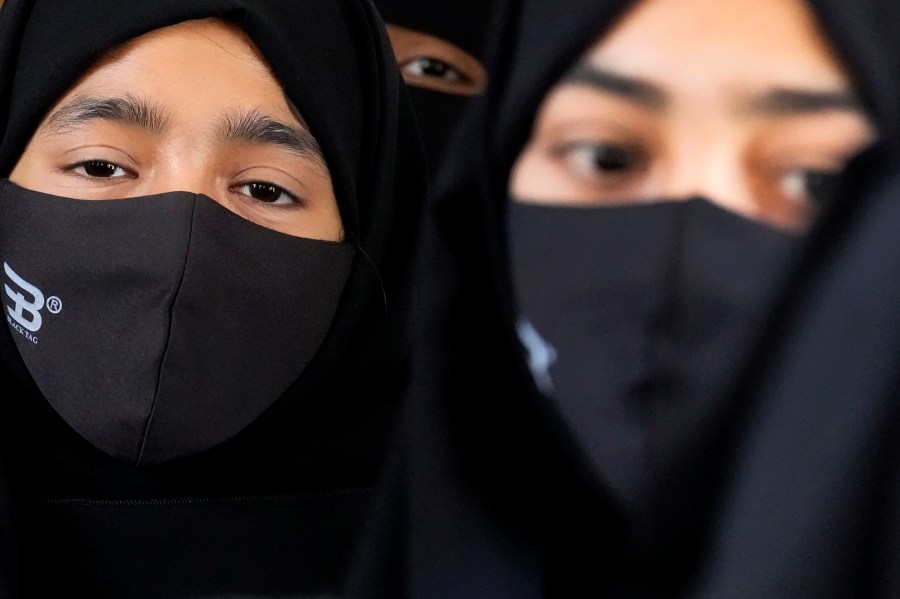 Even though the ban is only imposed in the southern state of Karnataka, critics worry it could be used as a basis for wider curbs on Islamic expression in a country already witnessing a surge of Hindu nationalism under Prime Minister Narendra Modi’s governing Bharatiya Janata Party.

“With this judgment, the rule you are making can restrict the religious freedom of every religion,” said Faizan Mustafa, a scholar of freedom of religion and vice chancellor at the Hyderabad-based Nalsar University of Law. “Courts should not decide what is essential to any religion. By doing so, you are privileging certain practices over others.”

Supporters of the decision say it’s an affirmation of schools’ authority to determine dress codes and govern student conduct, and that takes precedence over any religious practice.

“Institutional discipline must prevail over individual choices. Otherwise, it will result in chaos,” said Karnataka Advocate General Prabhuling Navadgi, who argued the state’s case in court.

Before the verdict more than 700 signatories including senior lawyers and rights advocates had expressed opposition to the ban in an open letter to the court’s chief justice, saying, “the imposition of an absolute uniformity contrary to the autonomy, privacy and dignity of Muslim women is unconstitutional.”

The dispute began in January when a government-run school in the city of Udupi, in Karnataka, barred students wearing hijabs from entering classrooms. Staffers said the Muslim headscarves contravened the campus’ dress code, and that it had to be strictly enforced.

A group of female Muslim students sued on the grounds that their fundamental rights to education and religion were being violated.

But a three-judge panel, which included a female Muslim judge, ruled last month that the Quran does not establish the hijab as an essential Islamic practice and it may therefore be restricted in classrooms. The court also said the state government has the power to prescribe uniform guidelines for students as a “reasonable restriction on fundamental rights.”

“What is not religiously made obligatory therefore cannot be made a quintessential aspect of the religion through public agitations or by the passionate arguments in courts,” the panel wrote.

The verdict related on what’s known as the essentiality test — basically, whether a religious practice is or is not obligatory under that faith. India’s constitution does not draw such a distinction, but courts have used it since the 1950s to resolve disputes over religion.

In 2016, the high court in the southern state of Kerala ruled that head coverings were a religious duty for Muslims and therefore essential to Islam under the test; two years later India’s Supreme Court again used the test to overturn historical restrictions on Hindu women of certain ages entering a temple in the same state, saying it was not an “essential religious practice.”

Critics say the essentiality test gives courts broad authority over theological matters where they have little expertise and where clergy would be more appropriate arbiters of faith.

India’s Supreme Court is itself in doubt about the test. In 2019 it set up a nine-judge panel to reevaluate it, calling its legitimacy regarding matters of faith “questionable”; the matter is still under consideration.

The lawsuit in Karnataka cited the 2016 Kerala ruling, but this time the justices came to the opposite conclusion — baffling some observers.

Surendranath said the most sensible avenue for the court would have been to apply a test of what Muslim women hold to be true from a faith perspective: “If wearing hijab is a genuinely held belief of Muslim girls, then why … interfere with that belief at all?”

The ruling has been welcomed by Bharatiya Janata Party officials from Mukhtar Abbas Naqvi, the federal minister of minority affairs, to BC Nagesh, Karnataka’s education minister.

Satya Muley, a lawyer at the Bombay High Court, said it’s perfectly reasonable for the judiciary to place some limits on religious freedoms if they clash with dress codes, and the verdict will “help maintain order and uniformity in educational institutions.”

“It is a question of whether it is the constitution, or does religion take precedence?” Muley said. “And the court’s verdict has answered just that by upholding the state’s power to put restrictions on certain freedoms that are guaranteed under the constitution.”

Surendranath countered that the verdict was flawed because it failed to invoke the three “reasonable restrictions” under the constitution that let the state interfere with freedom of religion — for reasons of public order, morality or health.

“The court didn’t refer to these restrictions, even though none of them are justifiable to ban hijabs in schools,” Surendranath said. “Rather, it emphasizes homogeneity in schools, which is the opposite of diversity and multiculturalism that our constitution upholds.”

The Karnataka ruling has been appealed to India’s Supreme Court. Plaintiffs requested an expedited hearing on the grounds that a continued ban on the hijab threatens to cause Muslim students to lose an entire academic year. The court declined to hold an early hearing, however.

Muslims make up just 14% of India’s 1.4 billion people, but nonetheless constitute the world’s second-largest Muslim population for a nation. The hijab has historically not been prohibited or restricted in public spheres, and women donning the headscarf — like other outward expressions of faith, across religions — is common across the country.

“What if the ban goes national?” said Ayesha Hajeera Almas, one of the women who challenged the ban in the Karnataka courts. “Millions of Muslim women will suffer.”

“Hijab for many girls is liberating. It is a kind of bargain girls make with conservative families as a way for them to go out and participate in public life,” he said. “The court completely ignored this perspective.”

Associated Press religion coverage receives support through the AP’s collaboration with The Conversation US, with funding from Lilly Endowment Inc. The AP is solely responsible for this content.