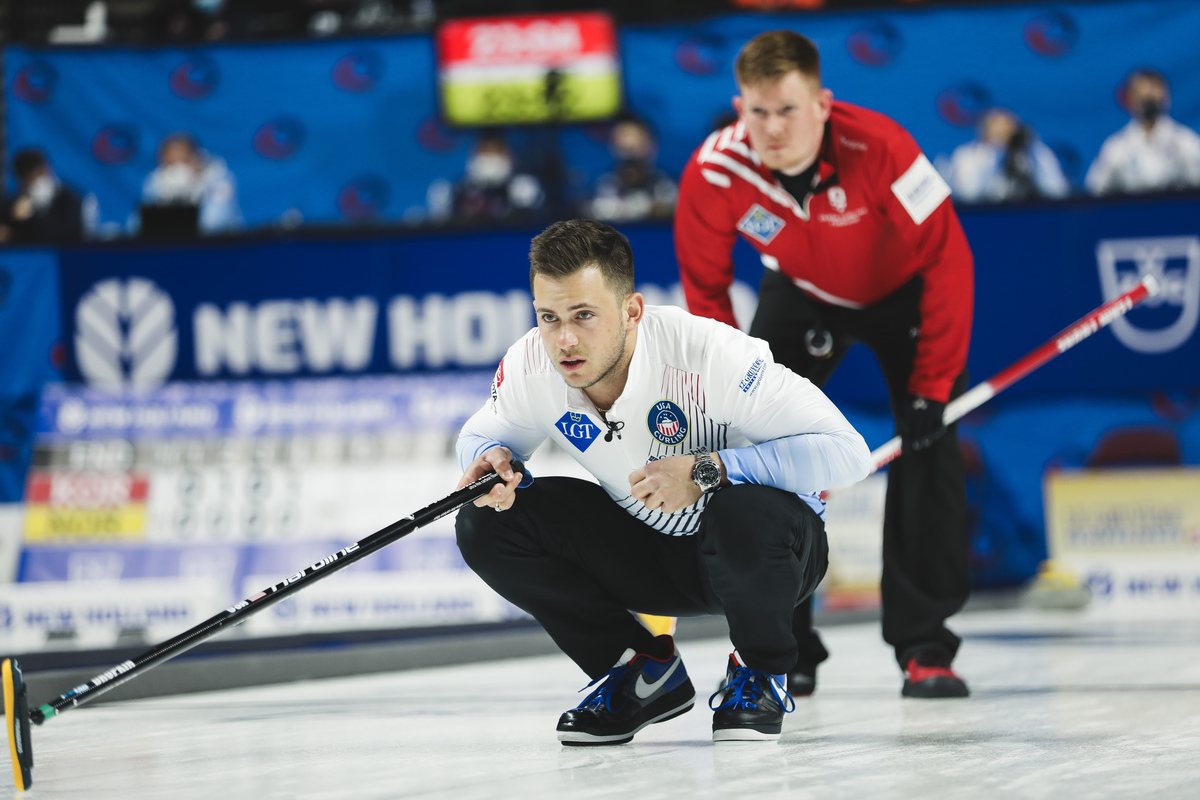 After an opening ceremony where World Curling Federation President Kate Caithness showed her prowess by delivering the opening stone, competitive play at the LGT World Men’s Curling Championship 2022 got underway on Saturday afternoon in the Orleans Arena, Las Vegas, United States, with the first round -robin session.

Defending champions Sweden, straight from winning Olympic gold in Beijing a few weeks ago, opened with a 7-4 win over Netherlands, while hosts United States had an 8-2 win over Denmark. Other winners in this session were Norway, who beat Korea by 7-3 and Olympic bronze medalists Canada, who were 6-4 winners over Czech Republic.

In their game against Sweden, Netherlands opened with a single point in the first end and then had a single-point steal in the second end, to take an early 2-0 lead. In the seventh end, with the game level at 3-3, Sweden’s skip Niklas Edin was able to draw for three points and a 6-3 lead. After a blank eighth end, Netherlands skip Wouter Goesgens played a draw against four Sweden counters, to score one point and reduce Sweden’s lead to 6-4. Sweden then went on to win by 7-4.

Hosts United States held a 2-1 lead over Denmark as the teams played the fifth end, when Denmark skip Tobias Thune scored one point with a draw, to level the game at 2-2 at the break. In the next end, United States skip Korey Dropkin also played a draw for one point to take a 3-2 lead. After this, a strong second half performance gave the Americans steals in the next two ends, to win by 8-2 in eight ends.

Afterwards, Dropkin said, “It’s great to have a home crowd. We had a lot of family here to cheer us on. It’s a first world championship for us young bucks and we’re happy getting used to the ice, getting our feet wet, and starting with a win.”

Canada faced Czech Republic in this session and in the fourth end, with Canada leading by 2-1, their skip Brad Gushue played a delicate tap-up of one of his own stones to score two points and increase his team’s lead to 4-1 . By the seventh end, the Canadians held a 5-1 lead when Czech skip Lukas Klima played a draw-shot to score two and reduce Canada’s lead to 5-3. The teams then swapped single scores in the eighth and ninth end, before Canada went on to win by 6-4 when they ran the Czechs out of stones in the tenth end.

After this opening win, Canada’s Gushue said, “We had some challenges there – they played pretty good and forced us into some tough shots. I missed one in eight, but made two good ones in ten which sealed the deal for us.”

Korea faced Norway in the fourth game of this session and the Koreans held a 2-1 lead as the teams went into the fifth-end break. Norway stole one point in the eighth end and a further three-point steal in the ninth completed their opening 7-3 win.

After the game Ramsfjell said, “It’s always important for our self-esteem to win the first game, and it’s good for the standings. We had a tricky first half, it’s the first time we’ve been on championship ice for three years, so I guess that’s understandable. Our coach says winning our first game is really good, but winning our second game is even better, so we’ll go back and get ready to face Canada this evening.”

You can engage with the World Curling Federation during the LGT World Men’s Curling Championship 2022 on TwitterInstagram, Facebook and Weibo and by searching the hashtag #curling #WMCC2022