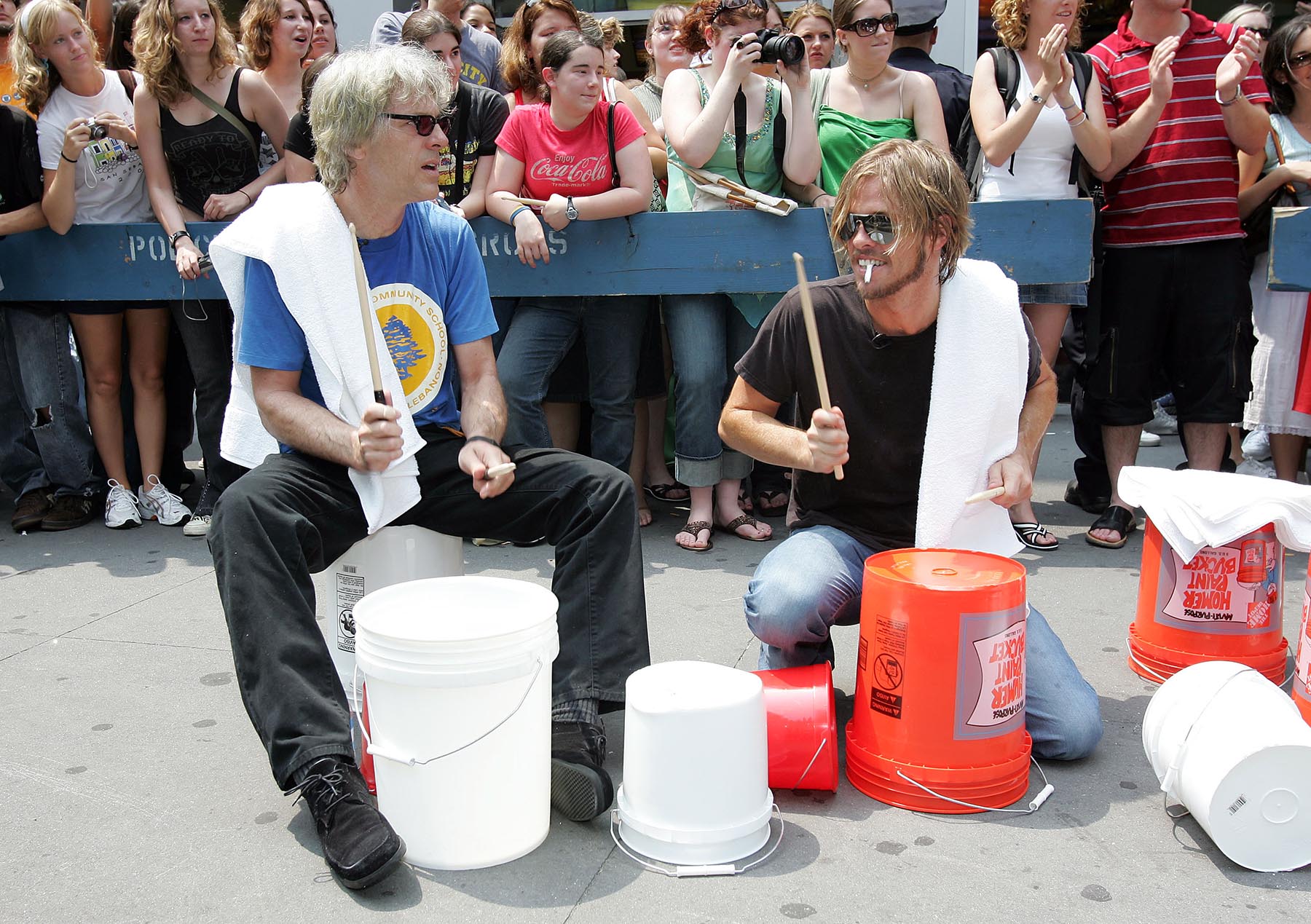 As a young drummer, Taylor Hawkins worshiped the Police. “My brother handed me a copy of Zenyatta Mondatta,” Hawkins told the BBC in 2019. “This was 1982. He goes, ‘If you want to be good, you have to play it like this guy.’ My two first major inspirations — probably the two guys that shaped a lot of what I do when I play drums in a rock band — are Roger Taylor and Stewart Copeland.”

Hawkins finally met his hero in 2005, and they began a long friendship that consisted of jams at Copeland’s home studio, the Sacred Grove, late-night phone conversations, and frequent hangs. Copeland called Rolling Stone to share his memories of the late drummer.

All of us in the drummer community are texting back and forth our shock and horror at this unexpected event. In fact, not to get too Grim Reaper-ish about it, but the last time I physically saw Taylor — although we talked on the phone a lot — was just as the lockdown was beginning, after Neil [Peart’s] memorial. I was there with [Jethro Tull’s] Doane Perry, [Tool’s] Danny Carey, and [Red Hot Chili Peppers’] Chad Smith, and Taylor, all lamenting the loss of our guiding light Neil Peart. And now, we will be reconvened.

We enjoyed each other’s company. Much more than guitarists do. you would think we would be more competitive, because there’s only one drum set on stage and you can have any number of amps. But for some reason we like extra rhythm clattering around us. He was very much in the drum tribe. Brothers of the stick. We have our own language, one not understood by guitarists, and particularly alien to keyboard players.

Taylor was a great hang, and there’s a big hole where a lot of laughs used to live. When we weren’t goofing off with each other, we were on the phone talking crackpot theories, get-rich-quick schemes, and just general hang bullshit. He was just indefatigably cheerful. He was emotional as well, but that just gave spice to his cheerfulness.

He was always Mister Fanboy, but that was part of his shtick. “OK, OK, Taylor, calm down!” One of his social tricks was that whenever we were hanging out, he’d select a Police T-shirt from his extensive collection. When he hung out with Neil, he’d have his Rush T-shirt on. He was 50 years old going on eight.

He was a fan of everybody, a real enthusiast. Even though he was a star, he was very interested in all the other people, how they got there and what they do. He knew it all — all the different things that everybody could do. Every flamma diddle and rattamacue as played by his heroes.

He’d go to his extensive estate, at the end of which is a guest house he turned into the drum palace. He could do the John Bonham double-bass-drum kick thing before they invented double-bass-drum pedals. Neil’s single-stroke rolls down all 14 tom-toms. All my stuff, Roger Taylor’s stuff, Phil Collins. He was fascinated by it all — and I’m sure it informed his own style — but he had his own thing. He went straight for the money.

He had no one sense of competition or one-upmanship, and we all know the reason for that: because his boss was a drummer. The worst indignity: His boss was one of the best drummers ever. So this made all of us other drummers with our axes to grind and gripes look at the world more calmly. Just think about Taylor’s gig.

I was thinking about when we met. I got a strange invitation out of the blue from the Foo Fighters to join them on their jet up to San Francisco to play a show [in 2005]and then straight to New York where they did 24 Hours of Foo on MTV. I think that’s the first time I met those guys. What really impressed me about all of them is not only were they the headlining act, but they all had side bands that were the supporting acts. Hardworking, those young musicians.

I’m not sure if it was Taylor or Dave who decided “That’s it, on the Police reunion tour [in 2007] we’re opening for the Police, damn it!” They were already a stadium act! So when we played Dodger Stadium, they insisted on opening for the Police. It was a very good thing, because they lit the whole stadium up. All we had to do was walk out there and look handsome, and the place was ours. There was that one moment [in the 2008 concert documentary Certifiable] where Dave’s going, “They’ve got lamb. We don’t have lamb.” By the way, he had lamb.

He had many more chops than he ever showed in the context of the Foo Fighters. The singing part came later. He always wanted to do the Clark Kent [Copeland’s 1980 solo debut] band. I said “Look, everyone wants to play the drums on that, can you play guitar or sing?” And at the time I got the impression he didn’t have that. Dave probably pushed him out in the front of the stage. He discovered, the same way Dave did, “Hey, it’s not rocket science. All you’ve got to do is have charisma and you can sing.” Dave and Taylor were so fraternal. They would claw at each other’s jugular veins and hug very soon after. In a way that only brothers can.

As I’m entering my 70th year, I’m an agony aunt for all my brothers of the stick. Never gave him any advice on how to play his darn drums — I would not be so impertinent — but we did talk long into the night about life’s complexities. OK, I’m giving the game away here, but he was a rock star, but also a father of three, husband to Allison. The three kids, Oliver, Annabelle, and Everleigh. And since I have seven kids and five grandkids, I had a couple of words of wisdom to impart. But in that sense, he was extremely solid.

I had just finished playing a show with the Nashville Symphony [when I found out he died], It was just an amazing show. Came offstage, the hotel was a block and a half away. I was in the shower before the audience was out of the building, endorphins pumping out of every pore. I was heading down to the bar, and just as I’m walking out of my hotel room door, I get the text. “Oh, for fuck’s sake, you’re kidding.” I get down to the bar, which is full of a throng of happy cheerful people all saying “Good show.”

The natural endorphins are still going strong, and at the same time just overwhelmed with disbelief and shock. Like I said, Neil saw his train coming and he had a first-class ticket. Nobody saw Taylor coming. He was just a force of life that seemed unstoppable. He was a living thing, not a thing that will ever die. So the suddenness was profound.

The music, of course, is going to be important to a lot of people, but the hang, that’s what I miss. The guy, that laugh, the husky kind of voice that he had, that surfer voice. He was certainly the quintessential surfer dude. Laguna Beach all the way. Was he actually a surfer? I never got a chance to ask him.

I’m so sorry for Allison and those kids. Dave, the band. That’s what makes me get through my day, is how much deeper and more profound, sudden, their loss was. They have a much bigger emotional mountain to climb. But his people who are more just his chuckle buddies, it takes longer to sink in that there’s a hole there. You know that if it had been anybody else, Taylor and I would be on the phone right now, thinking deeply about it. I just miss him.