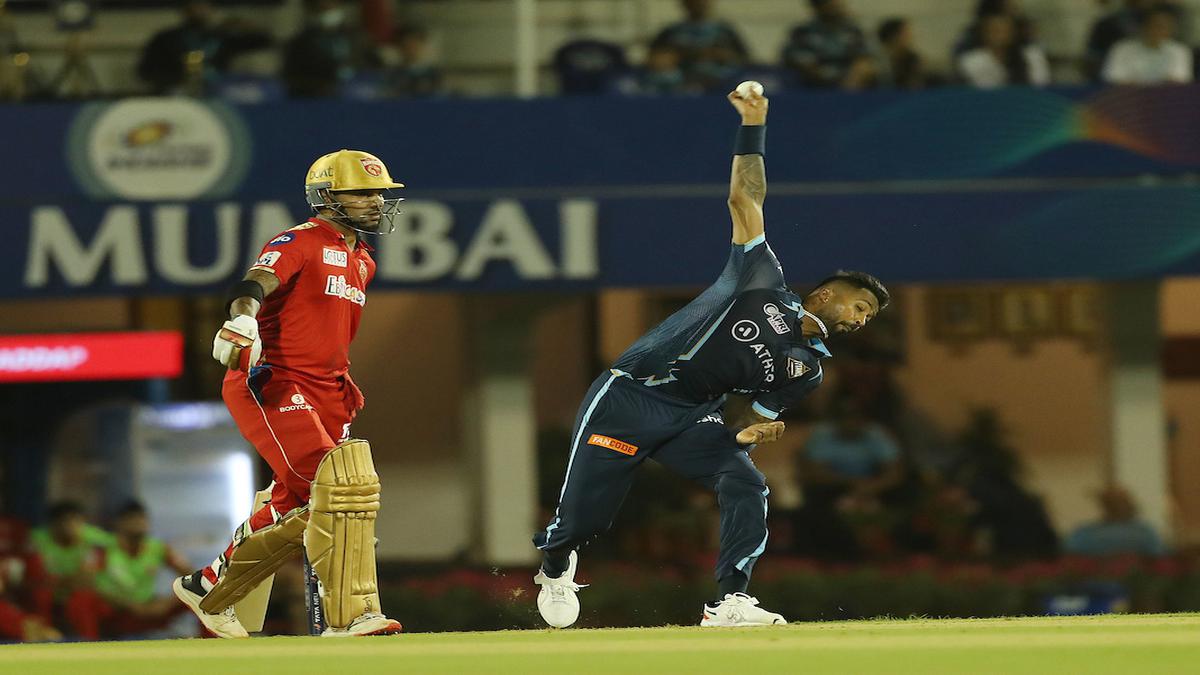 Gujarat Titans skipper Hardik Pandya took the wicket of Punjab Kings captain Mayank Agarwal in his first over of an IPL 2022 fixture at the Brabourne Stadium in Mumbai on Friday. Hardik dug in a short one to Mayank at over 140 kmph to induce a miscued pull which was easily taken by Rashid Khan at mid wicket.

However, the all-rounder was taken for 16 runs in the 20th over and ended with figures of one for 36 from four overs as Punjab Kings posted 189 for nine.

Hardik bowled his quota of four overs in Gujarat Titans’ first two outings in IPL 2022, returning figures of 0 for 37 and one for 22 against Lucknow Super Giants and Delhi Capitals, respectively. Rolling his arm over in the T20 league for the first time since the 2019 IPL final against Chennai Super Kings, Hardik started by conceding just the one run in his first over against the Super Giants by keeping the ball between good and back of a length.

After going for just 18 runs in his first three overs, however, Hardik was taken down by debutant Ayush Badoni for 14 runs in the first three balls of his final over before Deepak Hooda’s four off the last delivery made it 19.

Against the Capitals, Hardik claimed his first wicket in the IPL in more than two years by pitching it short to opener Tim Seifert on the first ball of his spell. Notably, he shared the new ball with pace spearhead Mohammed Shami in Titans’ successful defense of 172 for six.

In the last couple of years, Hardik hasn’t bowled much because of his back injury. In an interview last month, when asked where his bowling is at the moment, he said, “It’s a surprise for everyone.”

Earlier, Hardik bowled 16 overs across three ODIs and a T20I on India’s tour of Sri Lanka in July last year, and did not bowl a single over in the UAE leg of the IPL 2021 for Mumbai Indians. In fact, Hardik did not bowl for Mumbai since the 2019 IPL and purely played as a batter. The last time Hardik bowled was against Afghanistan at the T20 World Cup, when he conceded 23 runs in two overs.

Hardik fell from Grade A to Grade C in the BCCI central contracts system announced earlier this month.

However, with another T20 Word Cup on the horizon, Hardik bowling at full tilt bodes well for India, which has severely lacked the services of a fast-bowling all-rounder in its ranks in limited-overs cricket. While Venkatesh Iyer has been touted as a possible alternative, the 27-year-old does not generate the same pace and possess the power-hitting prowess of an in-form Hardik.