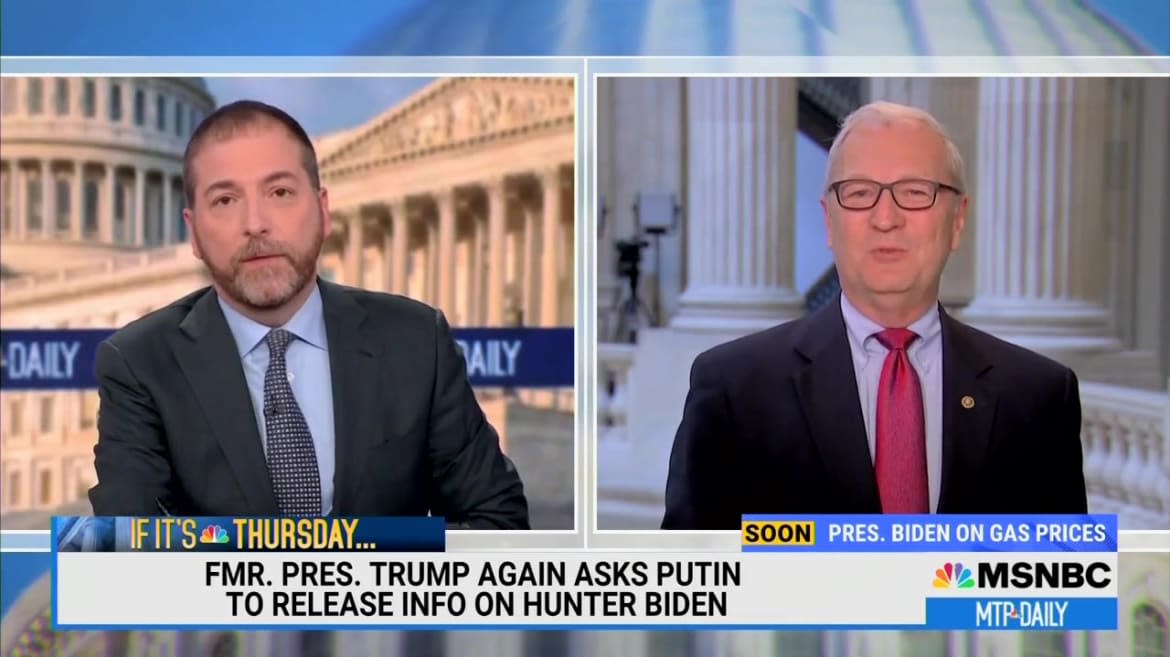 A Republican lawmaker insisted on Thursday that former President Donald Trump was just being sarcastic and tweaking the media when he brazenly called for Russian President Vladimir Putin to release dirt on President Joe Biden’s son Hunter.

In an interview earlier this week with JustTheNews’ John Solomon, who just so happens to be the architect of Rudy Giuliani’s Ukraine conspiracies that led to Trumps’ first impeachment, the ex-president implored America’s top adversary to release damaging information about the president of the United States.

“As long as Putin is not exactly a fan of our country, let him explain… why did the mayor of Moscow’s wife give the Bidens—both of ’em—three and a half million dollars?!” Trump exclaimed, advancing an unsubstantiated claim about the Biden family. “I would think Putin would know the answer to that. I think he should release it. I think we should know that answer.”

Speaking with Cramer on Thursday, MSNBC anchor Chuck Todd brought up the fact that Trump once again was asking for help to tarnish a political rival from a foreign government—this time, from a country waging an unprovoked war with an American ally.

“Why would you trust propaganda from somebody who is, you know, right now based on the conversation I had earlier, President Biden called for him to be removed from power?” Todd wondered. “Why would you want to trust anything Putin had to say about Hunter Biden?”

After Cramer said Trump’s comments were “more sarcastic than it was anything” else, the MTP Daily host pushed back on his characterization.

“I mean, I’m sorry, it comes across as almost a bit unpatriotic to ask literally the enemy of the free world right now for propaganda for a political opponent,” Todd declared. “I mean, it just seemed like a horrendous thing to do by the former president. No?”

The North Dakota senator deflected by claiming the media would be “treating the war in Ukraine like a Boy Scout camp” if “Hunter Biden’s name was Donald Trump Jr.,” prompting Todd to cut him off.

“Senator, that is the laziest attack. It’s not about the media,” the anchor grumbled.

“It doesn’t matter about the media,” Todd fired back. “Is it right for the former president of the United States to ask an enemy of the free world to do this?”Asserting that what an ex-president does can’t be compared to the current president, Cramer ascribed the actions to merely Trump being Trump.

“Donald Trump is Donald Trump,” he said. “He hasn’t changed. He’s not going to change. It’s more interesting to the Washington press corps than it is to the general public. Was it the wisest thing in the world to say? Perhaps not, but he’s Donald Trump and he says these things.”

Adding that he thinks Putin is a “war criminal,” Cramer downplayed Trump’s remarks as nothing more than the former president taking the press for a ride.

“Once again Donald Trump baited you all and you all took the bait. Now we’re having to, you know, discuss this,” Cramer said.

Cramer, meanwhile, dodged the question again by saying there is “evidence the Democrats fed information into the White House to plant false evidence” that Trump colluded with Russia, parroting misleading claims about Special Counsel John Durham’s most recent filing.

“How does that make what Donald Trump is doing somehow better?” Todd asked exasperatedly.

“I’m way more concerned, and I think the American people are, with the current president and his behavior and really the lack of scrutiny compared to a former president who has a long history of saying sort of outrageous things, whether seriously or not seriously, and being taken way, way, way too seriously, frankly, by a press corps that’s all too anxious to jump on an interesting personality, to say the least,” Cramer deflected again. “I’ll add when Donald Trump was president, Russia didn’t invade Ukraine.”

Read more at The Daily Beast.

Get the Daily Beast’s biggest scoops and scandals delivered right to your inbox. Sign up now.