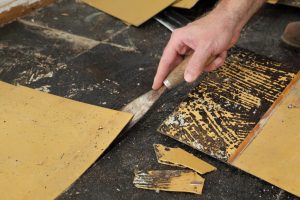 A New York judge has denied The Goodyear Tire and Rubber Company’s motion to dismiss a lawsuit filed by a man diagnosed with asbestos-related lung cancer. Though the company argued that the tiles Ferdinand Catapano worked with contained no asbestos, testimony from both the victim and a former Goodyear floor tile development contradicted this assertion, giving rise to significant questions of fact.

Lung Cancer Victim Blames Asbestos in Tiles for His Illness

From 1969 until the time he retired in 2007, Ferdinand Catapano worked alongside his brother-in-law as a carpenter. A member of Carpenter’s Union Local 257, his worksites included both commercial and residential properties, and the projects to which he was assigned included installing Goodyear floor tile.

The lung cancer victim remembers working with Goodyear-branded tiles that were roughly 12″ x 12″ with non-homogeneous color patterns. Though Goodyear indicated that the tiles that it manufactured during the specified time did not exactly match Mr. Catapano’s memory and that they did not contain asbestos, the plaintiff contradicted this assertion, recalling that the tiles that he worked with came in a box that was specifically marked “vinyl asbestos tile.”

Asbestos-contaminated vinyl floor tiles have been directly linked to malignant mesothelioma and other asbestos-related diseases. Products fabricated with asbestos shed carcinogenic fibers when they are handled or cut, and when those fibers are inhaled or ingested, they become embedded in the mesothelium’s cells, where they cause genetic damage.

Though Goodyear’s motion for summary judgment indicated that the only floor tile Mr. Catapano could have worked with did not cause asbestos, the victim’s statement and memory of the product labeling contradicted this. And deposition testimony from a former Goodyear floor tile development engineer indicated that though the company had removed some of the asbestos-contaminated tiles from the market in 1975, they still received special orders for them and that they were still occasionally being produced during the time that the victim could have been exposed to them. These facts give rise to a question of fact that the judge ruled needed to be heard and decided by a jury.

If you or someone you love has been exposed to asbestos, you are at risk for mesothelioma, asbestosis, and other asbestos-related diseases. For information on the resources available to you, contact the Patient Advocates at Mesothelioma.net today at 1-800-692-8608.

Terri Heimann Oppenheimer is the head writer of our Mesothelioma.net news blog. She graduated from the College of William and Mary with a degree in English. Terri believes that knowledge is power and she is committed to sharing news about the impact of mesothelioma, the latest research and medical breakthroughs, and victims’ stories.