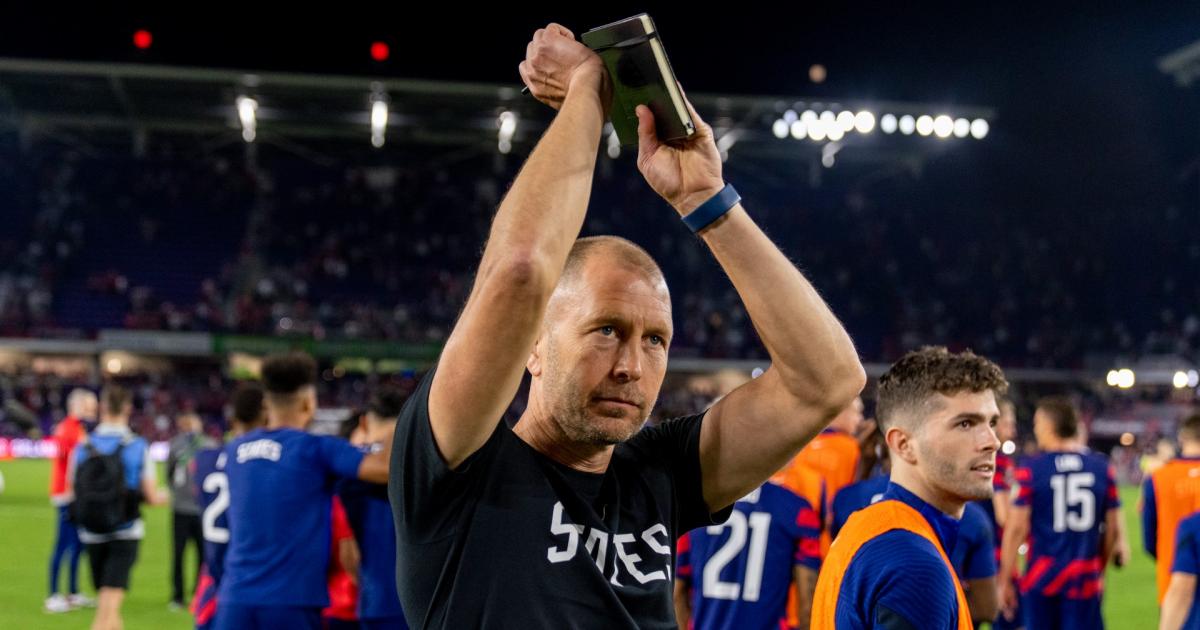 Of all members of the United States men’s national team gathered on the field at Estadio Nacional in Costa Rica, only midfielder Yunus Musah dared to flash a smile. It wasn’t how any of them imagined this moment, so they settled for handshakes and hugs and satisfaction. Joy would come eventually, once they were out of public view and dancing after a defeat wouldn’t seem so awkward.

“It was a full-on party,” coach Gregg Berhalter confessed when asked by CBS Sports what the mood of the locker room had been. “These guys earned it. They deserve it.”

The result Wednesday night was of no consequence. A 2-0 defeat to Costa Rica? Hey, it wasn’t 6-0, right? Losing by six or more was the only intolerable result for the USMNT.

By protecting their advantage in goal differential, the USMNT qualified for the 2022 World Cup, which ended a five-year sojourn through ignominy. The US had fully recovered from the shock of failing to qualify in 2017 when they only needed a draw against the last-place team and managed to lose. These young Americans will be figuratively stuffed into a ping-pong ball for Friday’s World Cup draw and literally step on a plane in the autumn to travel to Qatar.

The one good aspect of the apparent chicanery that led to Qatar being awarded the 2022 World Cup, rather than the United States, is this team needed to prove its worth on the field after what occurred in the 2018 cycle. If the tournament were scheduled to be here, and the USMNT qualified automatically, it would not have faced the tension and travails inherent in this process. These players, one of the youngest national teams on the planet, needed to earn their place.

“I’m extremely proud of this group,” US star Christian Pulisic told CBS Sports. “It’s a bit of a weird feeling right now because I hate to lose so much, but I’m really proud, and I can’t wait to go to the World Cup.”

There will be less time, however, for the team to prepare for the event. When the US last qualified and traveled to Brazil to play in the 2014 World Cup, the place was earned with a 2-0 victory over Mexico on Sept. 10, 2013. The Americans played their first game, against Ghana, on June 16, 2014. That’s more than a nine-month prep period. This team will have a little more than seven months.

“Now to be doing it as a coach with this group of players is something special.”@USMNT‘s Gregg Berhalter joins @jennyachiu to describe what it’s like to make it to a World Cup as a player and a coach. pic.twitter.com/bSZ4f6C9rn

Still, all is not sunshine and rainbows in the USMNT camp. Here is a list of what Berhalter must now address to assure the team is in peak form approaching the start of its World Cup.

Because of the Nations League tournaments in North America and Europe, and also due to the pandemic’s dismantling of the international soccer calendar for nearly a year, the US has not faced a genuine world power since a young team that included several of these players traveled to France to help warm up the opposition for Russia 2018. The closest since were a September 2019 draw at home against No. 16 Uruguay and a 2-1 loss at No. 14 Switzerland in May 2021.

Although the US has been dominant lately against No. 12 Mexico, with a 3-0-1 record since the start of last year, the players need to be reminded of what it is to play against the absolute best in the world. Whether it’s Belgium or Brazil, upping the level of competition as many times as possible in advance of Qatar is non-negotiable.

Nations League conflicts may make it difficult to arrange such games in June, so mid-September and the pre-tournament weeks in November might provide the best opportunities.

There are more than a handful of people both as fans and in the media who believe Giovanni Reyna is the most talented US player, even with all Christian Pulisic has accomplished. But an injury that kept Reyna from competing for the Americans from September until the recently completed three-game qualifying window created doubt regarding where he best fits into the team.

Reyna told reporters last week he considers attacking midfielder – or No. 10, in the sport’s jargon – to be his best position, yet has played primarily as a right winger for the USMNT. While he was absent, though, Berhalter found significant success with Timothy Weah and Brenden Aaronson. This presents a serious conundrum.

If Reyna plays in the midfield, it’s likely Yunus Musah would lose his spot. If it’s in the front three, both Weah and Aaronson might have to sit, or Weah would need to operate as a center forward or a false nine, which he did at times with the US U-20 squad but never with the senior side.

Reyna’s got to be somewhere, though, because it’d be foolish for the Americans to take the field with less than their best in place.

After reserve midfielder Kellyn Acosta’s tremendous success taking set pieces in the US win against Honduras in early February, it seemed logical he would be in charge of those against Costa Rica. But he only took free kicks, while Pulisic attempted all but a few of the team’s 12 corner kicks. As you can tell by the final score, none of those opportunities resulted in a goal.

#USMNT fans have been playing the “why is Pulisic taking corners?” game for months now.

And if you saw them, you’d know why. A few were struck too long, a few too softly, but precious few into truly dangerous areas. Even the headed opportunity Miles Robinson had early in the match came from too far out to be a true threat to Keylor Navas’s net. Pulisic has been handling this responsibility for a while now when he’s been available, with essentially no success.

It’s possible Berhalter wanted Pulisic to take these kicks because it’s clear, unless there’s an injury, Acosta will not be a starter for the USMNT in Qatar. So somebody else needs to do this. But the evidence indicates it’s not Pulisic.

Reyna took a few after Pulisic left the game, and they were at least a little better, which is not the greatest praise one can offer. But these chances can’t be so badly misspent.

Decide what, and who, he wants on the USMNT bench

It doesn’t take a ton of effort to figure out what the US lineup will be, if all players are healthy and available. There are a few positions of debate, as mentioned, but the core of this team became solidly established through the Octagonal.

Does he want to go to Qatar, though, with only a single player who has appeared in a World Cup previously? On the roster for the Costa Rica game, only DeAndre Yedlin could say he played in soccer’s biggest tournament. In 2014, Pulisic and midfield anchor Tyler Adams were 15, while striker Ricardo Pepi was 11. The only World Cups Reyna was a part of came in 2006, when he attended to watch father Claudio as a small boy, and 2002, when he was still yet to be born.

MORE: Have the US men won the World Cup?

Defender John Brooks is unlikely to break back into the central defense pairing that has been solidly established with Walker Zimmerman and Miles Robinson working so well together. But would Brooks be a valuable presence as a veteran of the 2014 World Cup? He scored the winning goal in the opener against Ghana. Would he embrace becoming a depth piece? How about goalkeeper Brad Guzan, who has been to the World Cup twice as a backup and but hasn’t been with the USMNT since serving as an unused substitute in last summer’s Gold Cup.

There no doubt will be young players who can gain experience, even off the field, for when the tournament is here in the US (and Canada and Mexico) in 2026. But there is so little in the way of experience available in the pool, it might be a mistake to ignore what Brooks or Guzan can offer.

See you in Qatar, babyyyyy!!!! pic.twitter.com/tgDDvh6ehO

Berhalter has been criticized by some for overseeing an offense that is playing a more attractive brand of soccer – except for that nagging part about producing goals.

The USMNT scored 21 goals in the 14-game qualifying cycle, but nine of those came in two games. Those outbursts ultimately helped get the team to Qatar because of the advantage they created in goal differential, which was the edge over Costa Rica. But they were shut out five times.

This is not how Berhalter’s best teams played with Columbus Crew SC. His 2015 team, which lost in the MLS Cup final, finished second in the league in goals scored. This team should be scoring more. It’s the one nagging flaw apparent through nearly all of the qualifying process. The US needs its midfield to create more chances, and Berhalter needs to sort through the options at center forward – Pepi, Jesus Ferreira, Jordan Pefok, Daryl Dike, maybe even Weah – and find someone more adept at putting the ball behind the keeper.

“I’ve been working my whole life for this moment,” Weah told CBS. “I think sometimes we have to realize – we slipped up tonight, but we’re still learning, we’re all still young, and things like this can happen. But at the end of the day, we put ourselves in position to be able to qualify.”

The UK government may levy a windfall tax on...

INDIANAPOLIS (WXIN) — Two women who were among the...