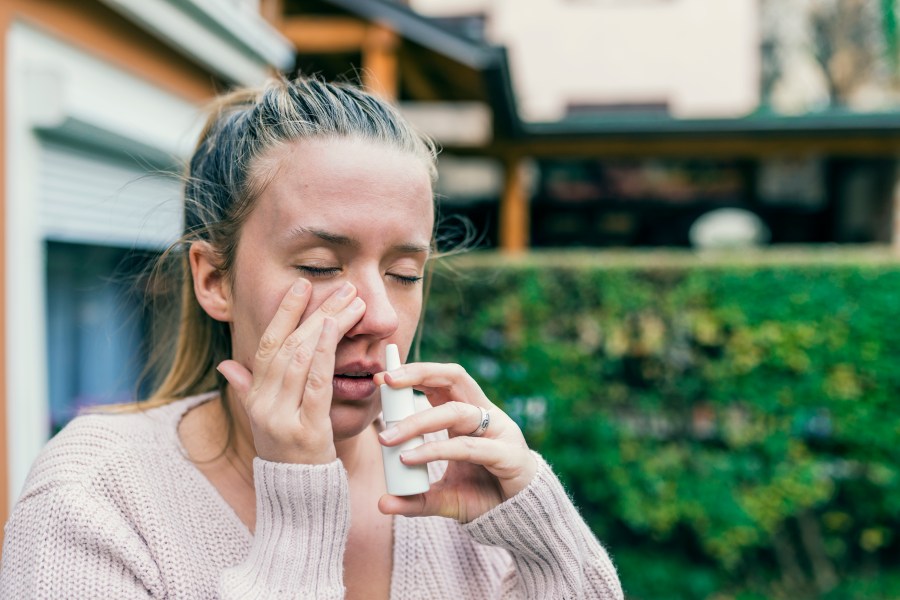 ITHACA, NY (StudyFinds.org) – A nasal spray that blocks COVID-19 infection and treats people who are already sick could be available within the next six months, according to researchers at Cornell University. Their study discovered a small molecule that people can spray into their noses which prevents COVID from infecting human cells.

In experiments on lab cells and in mice, researchers found that the molecule N-0385 can both protect against infection in healthy individuals and ease symptoms in patients using the spray within 12 hours of exposure to COVID. For humans, the team believes this could soon become a new coronavirus treatment that only requires a few daily doses.

“There are very few, if any, small molecule antivirals that have been discovered that work prophylactically to prevent infection,” explains Hector Aguilar-Carreno, associate professor of virology in the Department of Microbiology and Immunology in the College of Veterinary Medicine, in a university release. “A TMPRSS2 Inhibitor ACTS as a pan-SARS-CoV-2 prophylactic and therapeutic.”

“This is the first of its kind,” Aguilar-Carreno adds. “One advantage is that it works early in the infection, even after someone has already acquired the virus.”

Researchers add that they tested the nasal spray against the original COVID strain and the Delta variant. Although they didn’t examine its effectiveness against the more recent Omicron variant, the Cornell team is optimistic the results will remain the same.

Ready for use in 6 months?

The researchers developed this molecule in collaboration with a team from Université de Sherbrooke in Quebec. A California-based company, EBVIA Therapeutics, Inc., is now raising funds so scientists can start human trials and eventually begin drug development and mass production of the spray.

Study authors say if all of that comes together and the human trials are successful, the nasal spray could apply for and receive FDA emergency-use approval within six months.

“The N-0385 therapy is simpler and less expensive to mass produce than other types of COVID-19 treatments, such as monoclonal antibodies,” Aguilar-Carreno says.

How does the molecule work?

Coronaviruses use the now-infamous spike protein to grab and infect a patient’s cells. To do that, the virus binds to a receptor on the surface of a healthy cell. During their study, researchers targeted a specific enzyme, TMPRSS2, which plays a key role in allowing the spike to fuse with the cell membrane.

The team identified a number of small molecules, including N-0385, which might be able to disable TMPRSS2’s cell-infecting abilities. Scientists examined each molecule’s ability to knock out TMPRSS2, first in lab experiments using human respiratory cells and later in genetically engineered mice.

Researchers altered the mice to carry human receptors on their cells, so the team could see if N-0385 could prevent infection before, during, and after exposure to COVID-19. All of those tests revealed that the intranasally introduced molecule works at stopping weight loss in mice — a key sign of infection in these animals. For mice exposed to the virus before taking the nasal spray, it kept them from dying during the experiment.

The study is published in the journalNature,