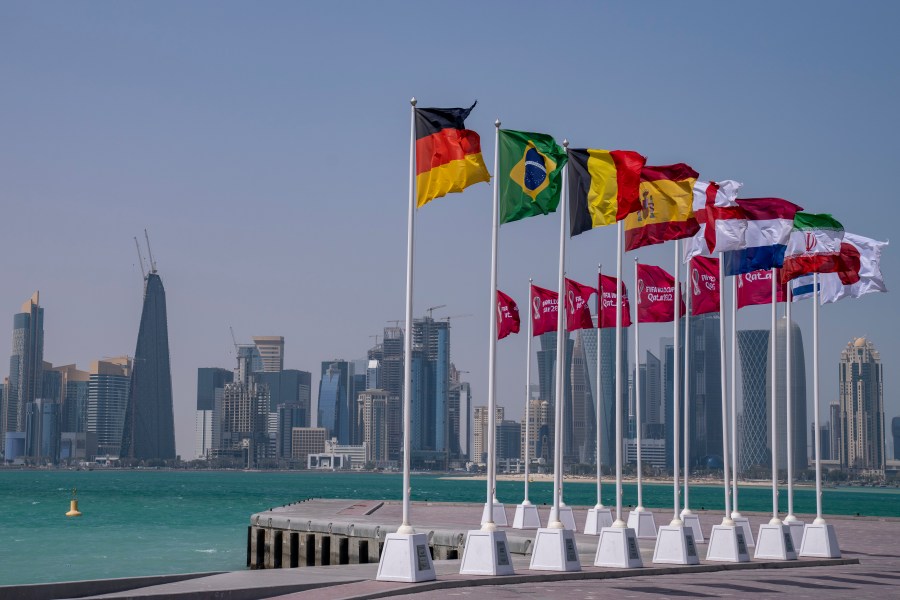 DOHA, Qatar (AP) — A World Cup like no other in its 92-year history will take shape this week at an unprecedented tournament draw.

When FIFA and host nation Qatar stage the draw ceremony show Friday, three of the 32 entries will be placeholders because the three-year qualifying program was delayed and is still ongoing.

A once-in-a-century global health crisis and the war in Ukraine made sure of that.

It means 37 nations will be involved on Friday, including five which will ultimately not play in November when the first “winter” World Cup kicks off.

The full lineup will not be known until at least June 14, when the intercontinental playoff round ends in Qatar. That is 74 days after the draw and the same date the 2018 tournament started in Russia, which was thrown out of the final stages of qualifying this time over the invasion of Ukraine.

Maybe FIFA got lucky seven years ago by moving the 2022 tournament to November and December to avoid the searing desert heat of Qatar’s summer.

The later start created wiggle room to clear the match backlog after the COVID-19 pandemic wiped out almost every national-team game outside Europe in 2020.

It has also put uncertainty on stage at the Doha Exhibition & Convention Center, where the show Friday starts at 7 pm (1600 GMT) and lasts one hour.

One of the balls being drawn from pot 4 of low-ranked teams will represent “Peru or Australia or the United Arab Emirates.” Another is “Ukraine or Wales or Scotland.”

So it goes at this major World Cup milestone, in perhaps its most unlikely host nation, on April 1.

Here’s a look at this unusual World Cup draw.

One sure thing is Qatar will be the top-seeded team in Group A, taking position A1 in the schedule of 64 matches in just 28 days.

The privilege is given to all host nations even when ranked No. 65 in the world, as Russia was. Qatar is currently No. 52.

Still, the 2019 Asian Cup winner is the exception among modern World Cup hosts, having never before qualified for the finals. Qatar’s debut opens the tournament on Monday, Nov. 21 at Al Bayt Stadium.

It means in the group stage Qatar avoids the world’s top-ranked teams, from Nos. 1 to 7 — Brazil, Belgium, France, Argentina, England, Spain and Portugal.

Those countries will be the next seven drawn out of top-seeded pot 1 and allocated in turn to Groups B through H.

HOW THE SEEDING WORKS

Seeding pots are filled according to FIFA rankings which weigh results over several years and are officially updated Thursday.

The next eight highest-ranked qualifiers go into pot 2, which is the second to be drawn. It includes Germany and likely the United States and Mexico after Wednesday’s qualifying games.

Next is pot 3 with teams ranked in the 20s by FIFA and finally pot 4 including Canada, back in the World Cup after a 36-year gap. Canada is in pot 4 despite leading the North American qualifying group.

The simple format is now complicated by the three playoff entries delayed to June: The European bracket containing Ukraine, which cannot currently prepare a team, and the two intercontinental playoffs.

FIFA weighted those entries downward into pot 4 according to the lowest-ranked potential qualifiers, such as Scotland, New Zealand and the UAE.

Higher-ranked playoff teams Peru and Wales face being seeded below their true level.

Geography also limits potential matchups. Teams from the same continent generally can’t go in the same group, except for some Europeans. Europe has 13 of the 31 qualifying slots and they cannot all avoid each other.

Five groups get two European teams, and the other three groups each get one. It means 2014 winner Germany from pot 2 can land with defending champion France.

Each four-team group is a round-robin of six games in total. The order each team plays the other is decided by another draw within the ceremony.

After each team is drawn, a subsequent ball — numbered 1, 2, 3 or 4 — is picked to place that country in the fixture grid.

This unpredictability means the two highest-ranked teams in a group could meet in any of the three rounds.

The 32-team lineup is the perfect number for a knockout bracket. The top two teams in each group — where goal difference is the first tiebreaker — advance to the round of 16.

A team’s path through to the quarterfinals, semifinals and final is set in the bracket. If Qatar advances as the Group A winner, it must then play the Group B runner-up.

Is there a “good” or “bad” section of the draw to land in?

Maybe yes at this congested tournament, which will be four days shorter than the 2018 edition in Russia.

Landing in Group B means starting on Nov. 21 instead of Nov. 24 in Group G or H. That means three extra rest days.

The Group G winner would have to play seven games in just 25 days to win the title. That team also gets just two full days off before a round of 16 game on Dec. 5.

Why is the schedule so tight? This World Cup is jammed into an enforced break in domestic league seasons in Europe.