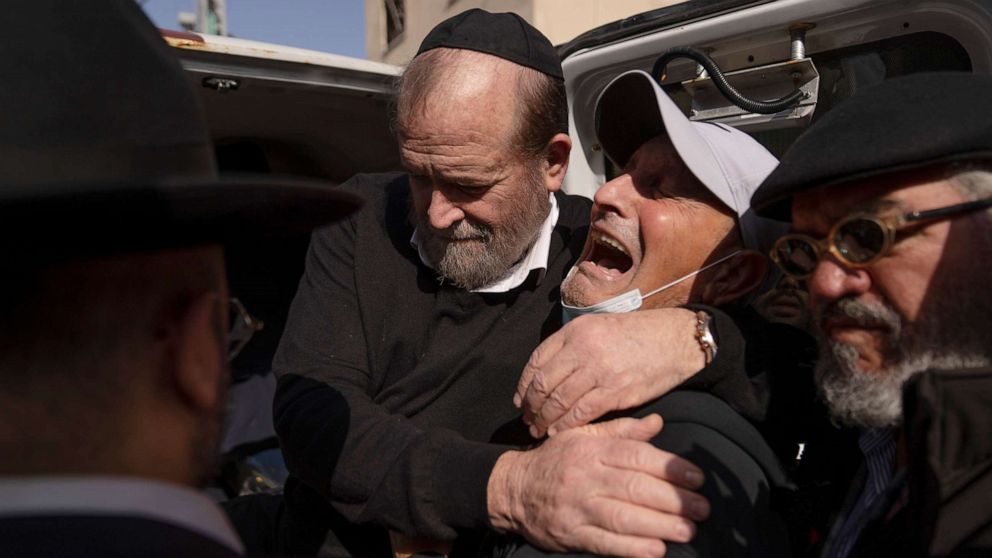 JERUSALEM and LONDON — A spate of deadly shootings in Israel has sparked renewed fears that the security situation is deteriorating as Palestinians approach the Islamic holy month of Ramadan.

On the streets of Bnei Brak, a city just outside Tel Aviv, on Tuesday, a gunman fired upon civilians, killing five, including an Israeli police officer, before the suspect was shot and killed.

Tuesday’s slayings marked the third in a series of unclaimed attacks labeled as terror by the Israeli authorities in just eight days, a wave of violence that’s left 11 dead and raised concerns among political leaders and analysts about further attacks.

Early Thursday morning, two Palestinians were killed and seven were injured during an Israeli army raid on a refugee camp in Jenin, in the occupied West Bank. In response to the Jenin attack, the head of Islamic Jihad has ordered all forces to be on high alert.

US Secretary of State Antony Blinken, who had warned of escalating violence while he was in Israel just 24 hours before the Bnei Brak shootings, denounced the attack.

“We strongly condemned today’s terrorist attack in Bnei Brak, Israel, that killed five innocent victims,” Blinken said. “This comes after two other recent horrific terrorist attacks in Hadera and Be’er Sheva, Israel. This violence is unacceptable. Israelis — like all people around the world — should be able to live in peace and without fear. Our hearts go out to the families of those killed in the attacks.”

“Israel is facing a wave of murderous Arab terrorism,” he said. “My heart goes out to the families who lost their loved ones tonight, and I pray for the well-being of the wounded. The security forces are working. We will fight terror with perseverance, stubbornness and an iron fist. They will not move us from here, we will win.”

Nine Israelis and two Ukrainians have been killed since March 22 in three separate attacks labeled as terror by the authorities. The previous attacks were carried out by Arab citizens. Tuesday’s suspect was a said to be a Palestinian, from the occupied West Bank, who had been living in Israel illegally.

Hamas, the militant group in charge of the Gaza strip, described the latest attack as “heroic” but made no formal claim of responsibility. Mahmoud Abbas, president of the State of Palestine, condemned the killing of Israeli citizens and warned against reactions aimed at the Palestinian people, according to the Palestinian news agency Wafa.

In response to the violence, 3,000 Israeli police will be deployed in Jerusalem during the month of Ramadan, Israeli TV Channel 12 reported.

On Wednesday, Bennett announced new security measures, and told all Israelis with a license to begin carrying a weapon, compounding the tense atmosphere.

The number of casualties is the highest seen in such a short period of time since 2015. Unlike then, however, when the majority of the attacks were characterized as “lone wolf” knife attacks in Jerusalem and the West Bank, the latest attacks in Israel were boldly carried out in major cities in the heart of the country with the use of automatic weapons.

The second in the trio of recent attacks took place in Hedera, carried out by two men reported to have received training in Syria. The apparent rise of some Islamic State group sleeper cells, their capacity to carry out such attacks and their ability to infiltrate the Palestinian community inside Israel and find recruits to carry out such attacks, marks a change in the security situation, analysts say.

The attacks came as a surprise to many observers, with some noting that the issues that came to the fore during the conflict between Israel and Gaza in May 2021 have been left unresolved.

With a succession of Arab states normalizing ties with Israel, there is a sense among analysts that hopes of a peace deal are becoming hopeless – and without that hope comes the threat of more violence.

Israel’s “Nationality Bill,” enacted in 2018, which reaffirmed Israel as a nation-state for Jewish people, has also proved controversial abroad and for the estimated 2 million Arabs living in the country. There are fears that the escalation could spread violence into Jerusalem and the West Bank, and a repeat of the 2021 war could be on the cards.

And it is charged days like the commemoration of the Land Day on Wednesday or the beginning of the holy month of Ramadan on Saturday, and grievances left unaddressed, which can tip the scale toward a renewed wave of violence.