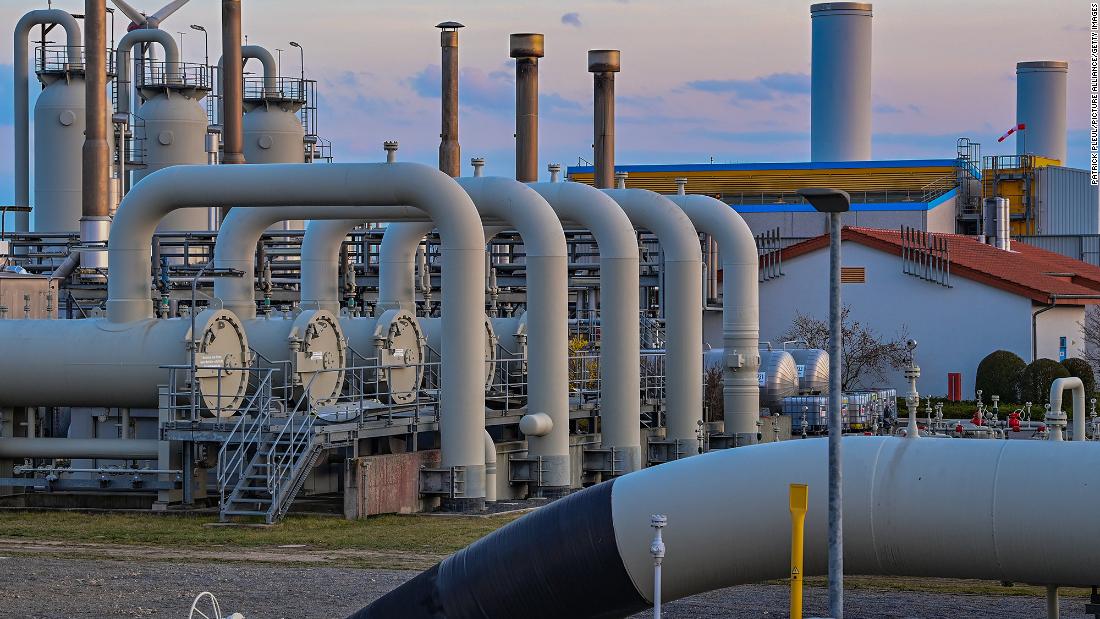 The Russian president delivered an ultimatum Thursday to “unfriendly” nations to pay for their energy in rubles starting April 1 or risk being cut off from vital supplies. Was that a bluff?

It’s too early to say, but Kremlin and Dmitry Peskov said Friday that Russia would not turn off gas supplies to Europe immediately.

Europe gets about 40% of its natural gas from Russia, carried on pipelines through Belarus, Ukraine, and Poland or under the Baltic Sea. Germany is the biggest buyer and its huge manufacturing industry guzzles the gas, and the power it generates, in vast quantities.

The German government this week activated the first of three stages of a crisis management plan that could ultimately result in energy rationing, and is appealing to the public to use as little as possible.
Any significant loss of Russian supply would likely tip Europe’s biggest economy into recession — and potentially the wider region too. Soaring gas prices are already making energy-intensive industries unprofitable and causing pain for many households. Survey data published Friday showed German manufacturing at its lowest ebb in 18 months. The picture isnt much brighter elsewhere in Europe.

What does Russia want?

Most of Russia’s gas export contracts are currently priced in euros or US dollars. According to the decree signed by Putin on Thursday, foreign buyers must open accounts at a Russian state-controlled bank, instead of dealing directly with state gas giant Gazprom. They would deposit euros into one account. The bank would sell the euros for rubles and transfer those into another account in the buyer’s name to be used to pay for gas.
Moscow may be trying to bolster demand for the ruble — which has recovered after crashing in the immediate aftermath of the invasion and ensuing sanctions. But the Kremlin had already forced Gazprom (and other big Russian exporters) to convert 80% of their foreign currency revenues into rubles, so any gain would be limited.
“Nevertheless, the new proposed payment policy for gas exports appears to be one factor that has contributed to a sharp rebound in Russia’s currency in recent weeks,” wrote Eurasia Group analysts in a report this week.

How has Europe responded?

Germany, France and other EU governments have rejected the Kremlin’s ultimatum, insisting they won’t be “blackmailed” by Moscow into changing the terms of existing contracts.

Existing contracts do not include an obligation to pay in rubles and that they must be respected, Paolo Gentiloni, the European Union’s top economy official and a former Italian prime minister, told CNN’s Richard Quest on Friday. That means the mechanism for swapping euros for rubles as proposed by Moscow won’t fly.

“It is an attempt to circumvent European sanctions and to blackmail the European Union,” he said.

Although the risk of a disruption to European supplies has increased, Russian gas was still flowing westwards on two of the three main pipelines on Friday, Reuters reported.

The Kremlin said payments for gas being delivered now would fall due towards the end of the month or the beginning of May, which is why Russia hadn’t immediately shut off the flow of gas to Europe.

“I received many questions about whether this means that if there is no confirmation in rubles, would it mean that gas supplies will be cut off from April 1? No, it doesn’t, and it doesn’t follow from the decree,” Peskov told reporters.

Gazprom would work with its customers to implement the new rules, Peskov said, adding that the ruble mandate could be reversed.

“Absolutely. If other conditions come up,” he said.

Russia needs the money from its energy exports more than ever, given the havoc sanctions have wrecked on other parts of its economy. Analysts say Russian GDP could shrink by about a fifth this year. And it couldn’t easily sell natural gas to other countries, such as China, because the pipeline infrastructure doesn’t yet exist.
Moscow’s decision to publicly threaten to turn off the taps could backfire by adding ever greater urgency to efforts to break Europe’s addiction to Russian energy. EU officials have already set a target of cutting Russian gas use by 66% this year. Germany is building terminals to import liquefied natural gas, US shipments are being ramped up, and Europe is accelerating renewable energy projects.

“Given the EU’s ambition to replace a majority of Russian imports with alternative suppliers by the end of the year, it seems likely that most if not all European buyers will opt not to renew supply deals,” the Eurasia analysts wrote.

“Europe’s gradual shift away from Russia’s energy supplies is structural, and will not be reversed.”

— Chris Liakos contributed to this article.