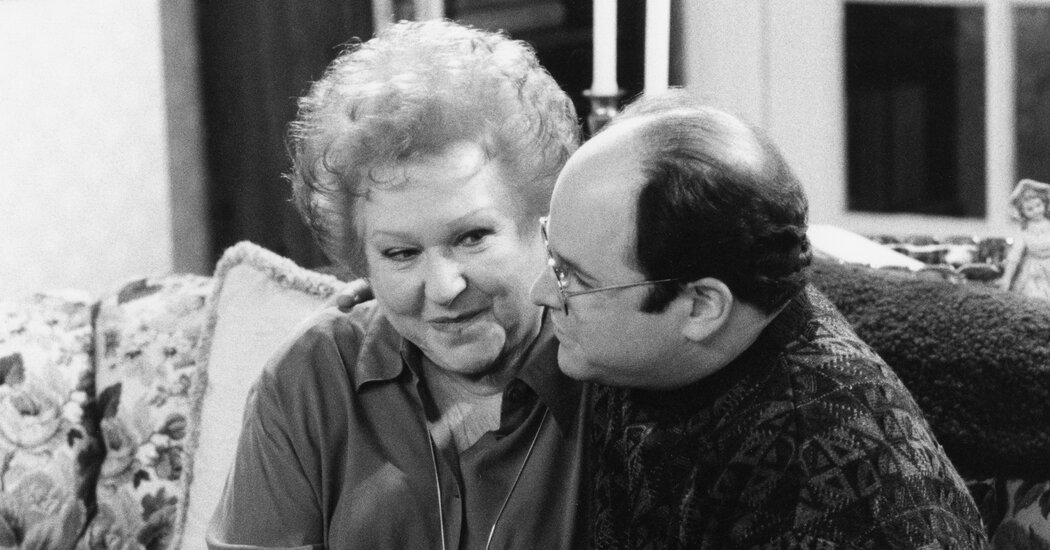 Estelle Harris, who hyperventilated her way into the hearts of millions of “Seinfeld” fans as George’s mother, Estelle Costanza, died on Saturday in Palm Desert, Calif. She was 93.

Her son Glen Harris announced the death in a statement sent by Ms. Harris’s agent.

In 27 episodes — starting in 1992 during the fourth season of “Seinfeld,” around the time that the show became a pop culture sensation, and continuing until its final episode in 1998 — Ms. Harris embarrassed and harangued her son, one of the show’s four main characters, George Costanza (Jason Alexander), and his father, Frank (Jerry Stiller).

During her character’s meltdowns, often in response to slights and offenses to propriety, Ms. Harris deployed a screech that had the urgency of a hyena in its death throes. When she whined about “waiting for hours,” that final word had three, maybe four moan-like syllables. The combination of stiffness and violence in her gesticulations expressed a forbidding level of psychological tension.

Ms. Harris knew how to make outrage into a joke.

“You don’t play comedy,” she told The Chicago Tribune in 1995. “It’s like that Jewish expression ‘crying laughter.’ All through the centuries the Jews had such terrible things happen to them that they had to laugh a little harder.”

Her “Seinfeld” debut was one of the series’ most famous episodes: “The Contest.” After George’s mother catches him having a private moment with one of her issues of Glamor magazine, she falls in shock, throws out her back and enters a hospital.

“I go out for a quart of milk; I come home and find my son treating his body like it was an amusement park,” Ms. Harris said. “Too bad you can’t do that for a living” — and now, with her voice rising, she used her working-class New Yorker’s accent to milk the script’s sarcasm: “You could sell out Madison Square GAAARDEN, Thousands of people could watch you. You could be a BIIIG STARRR,

That set the template for her subsequent appearances, including on other beloved episodes like “The Fusilli Jerry” (1995) and “The Rye” (1996). She began her scenes in a sane register of a volatile emotion — recrimination, self-pity, bafflement — and by the end of the sequence arrived at an outburst so intense it could only be farcical.

Ms. Harris’s success in the role led to other opportunities to play the shrill and unhinged, including in the “Toy Story” movie franchise, for which she provided the voice of Mrs. Potato Head.

At the height of the popularity of “Seinfeld,” Ms. Harris found herself with the kind of celebrity that drew looks on the street. Something in the emotionality with which she portrayed Estelle Costanza had prompted fond recognition in a national audience.

“Black people, Asians, WASPs, Italians, Jews — they all say, ‘Oh, you’re just like my mom,'” she told The Tribune.

Estelle Nussbaum was born on April 22, 1928, in the Hell’s Kitchen section of Manhattan, where her Polish-Jewish parents owned a candy store. She grew up largely in Tarentum, Pa., a coal-mining town where her parents moved to help relatives run a general store and to provide Estelle a gentler setting for her childhood.

Though she faced antisemitic taunts in her small town, Estelle found an outlet in stage performances. Her father, who she said “spoke the King’s English,” insisted that she take elocution lessons from a young age.

She moved back to New York in her late teens and later married Sy Harris, a salesman of window treatments. They had three children, and for a while, Ms. Harris was a homemaker.

After her big break on “Seinfeld,” Ms. Harris’s other major credits included the movies “Out to Sea” (1997), starring Jack Lemmon and Walter Matthau, and “My Giant” (1998), with Billy Crystal.

Mr. Harris died last year. In addition to her son Glen, Ms. Harris is survived by another son, Eric; a daughter, Taryn; three grandsons; and a great-grandson.

In her Tribune profile, Ms. Harris said she had to yell. Larry David, the co-creator of “Se-feld,” about her character’s constant yelling, but experience proved him right: “The more I, the more they laugh,” she said.

Ms. Harris admitted that her personal life prepared her for the part.

“I yell at my husband, but he doesn’t mind,” she said. “He’s grateful for the attention.”

This Voyager re-casting is bold but feels hollow

Sexy! When Flora Saini left us awestruck with her sizzling pictures