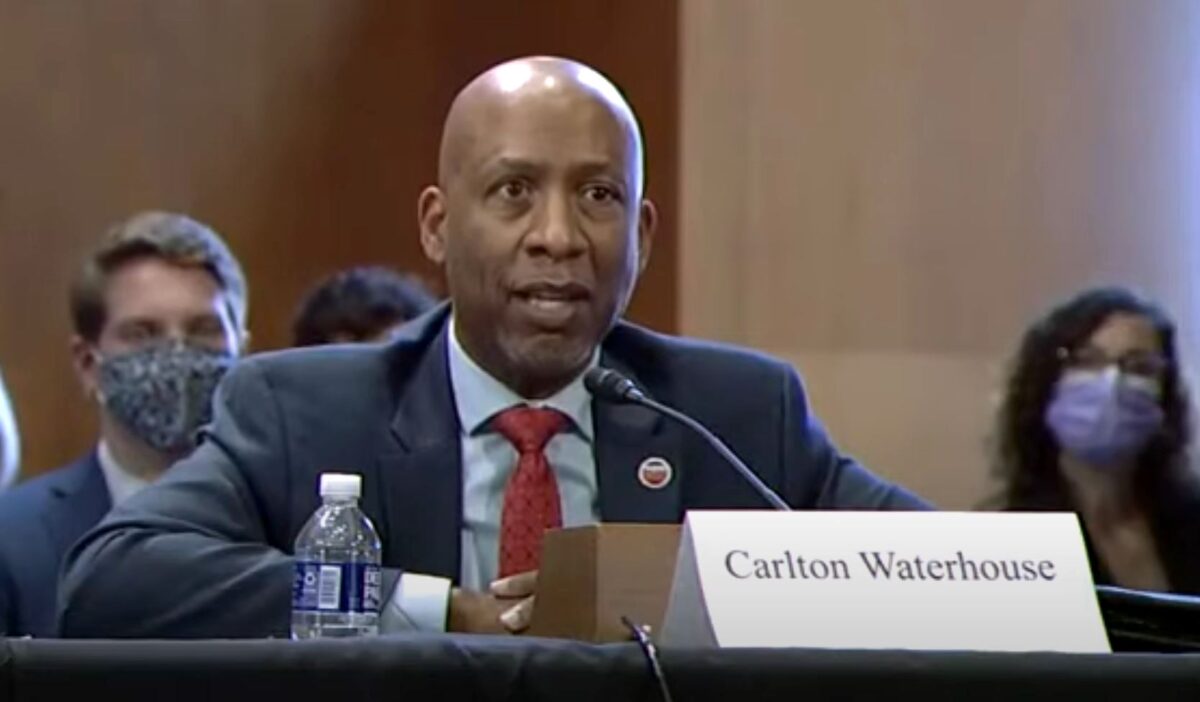 The Senate Committee on Environment and Public Works (EPW) deadlocked 10–10 on April 7 on the nomination of Carlton Waterhouse to serve as assistant administrator for the Office of Land and Emergency Management in the Environmental Protection Agency (EPA) —but a motion by Senate Majority Leader Chuck Schumer (DN.Y.) could still send it to the Senate floor.

Waterhouse — a law professor and international expert on environmental law and environmental justice — was re-nominated for the position this year by President Joe Biden, following a 2021 nomination that stalled. Senators also deadlocked 10-10 in the December EPW meeting that considered Waterhouse’s nomination.

But a Senate rule allowed the nominations of Waterhouse and other Biden nominees to be returned to the president in January 2022. Biden sent back Waterhouse’s nomination to the Senate, which re-referred it to the EPW committee.

The Office of Land and Emergency Management handles EPA’s waste and emergency response programs, including cleanups of hazardous spills and the placement of wind or solar power on contaminated sites.

In a September hearing on Waterhouse and other Biden administration nominees, senators discussed his qualifications for the role.

“He spent years in the 1990s working as an EPA attorney and acting on behalf of vulnerable communities that have suffered from the impacts of industrial waste, receiving the agency’s bronze star award four times for his work,” said EPW Chair Sen. Tom Carper (D-Del.) At that meeting.

“Mr. Waterhouse would be an asset to the Office of Land and Emergency Management in assisting communities confronted by the dangers of contaminated sites and making sure their voices are heard in government. ”

Waterhouse currently serves as a law professor at Howard University School of Law. His homepage indicates he has a doctorate in social ethics and a Master of Theological Studies degree, both from Emory University.

“After leaving EPA, I pursued my doctorate in social ethics to learn how to create laws and policies that treated people rightly and promoted justice for all. As a law professor, I have focused my research and writing on correcting environmental and other social injustices, ”Waterhouse said in a written statement to the EPW committee in Sept. 2021

She drew attention to a Tweet from Waterhouse in 2015.

“The ugly truth about energy. The ends do not justify the means, ”Waterhouse wrote, hashtagging #ResistCapitalism, among other hashtags.

“To be honest, I do not recall that Tweet,” Waterhouse told Capito at the September 2021 hearing.

A Search of #ResistCapitalism and Waterhouse’s Twitter handle, @CarltonWJD, by The Epoch Times showed at least 13 Tweets from Waterhouse using the hashtag.

“I think it would have been in some context, Senator, that has to date [back] for several years. As I said, I am not really active on Twitter. I am not sure what it was referencing, ”Waterhouse said in September 2021, in response to Moore’s questioning.

“But I can say this, Senator, that I recognize the value of capitalism as a way of making sure that goods and services are made available to people. I think reasonable and responsible regulation allows us to make sure that people can be safe and protected in the environment and in their daily lives, ”he added.

Waterhouse also came under fire from Republicans for his calls for the United States to pay ‘climate reparations’ to other countries, which he made at the American Climate Leadership Summit in 2020.

“Climate reparations is really just calling for the equitable redress for the harm that has been caused historically. That’s what it’s about — making amends, ”Waterhouse said at that meeting, as documented in a YouTube recording.

“I think climate reparations are essential, and an important part of having an equitable climate vision.”

At the April 7 hearing, neither Capito nor other senators present commented at length on Waterhouse or on another re-nominated EPA nominee, David Uhlmann.

Uhlmann’s nomination to serve as the EPA’s Assistant Administrator of Enforcement and Compliance was likewise returned to the Senate by Biden in January 2022.

“I am anxious to see both these talented and dedicated men [Waterhouse and Uhlmann] confirmed, and I’m glad we’re finally taking an important step toward that happening in today’s process, ”Carper said.

Capito submitted a written statement reiterating her concerns with Waterhouse’s past remarks.

The Epoch Times has reached out to Carper for additional comment on Waterhouse’s nomination.

Crucially, the deadlocked vote on April 7 need not spell the end of Waterhouse’s nomination.

Majority Leader Schumer can file a motion to discharge the nomination from EPW and bring it before the full Senate.

The same maneuver was used to bring now-confirmed Supreme Court nominee Judge Ketanji Brown Jackson out of the deadlocked Senate Judiciary Committee and before the full Senate.

The Epoch Times has reached out to Schumer to see if he intends to file a discharge motion for Waterhouse’s nomination.

The Epoch Times has also reached out to the EPW press secretary.