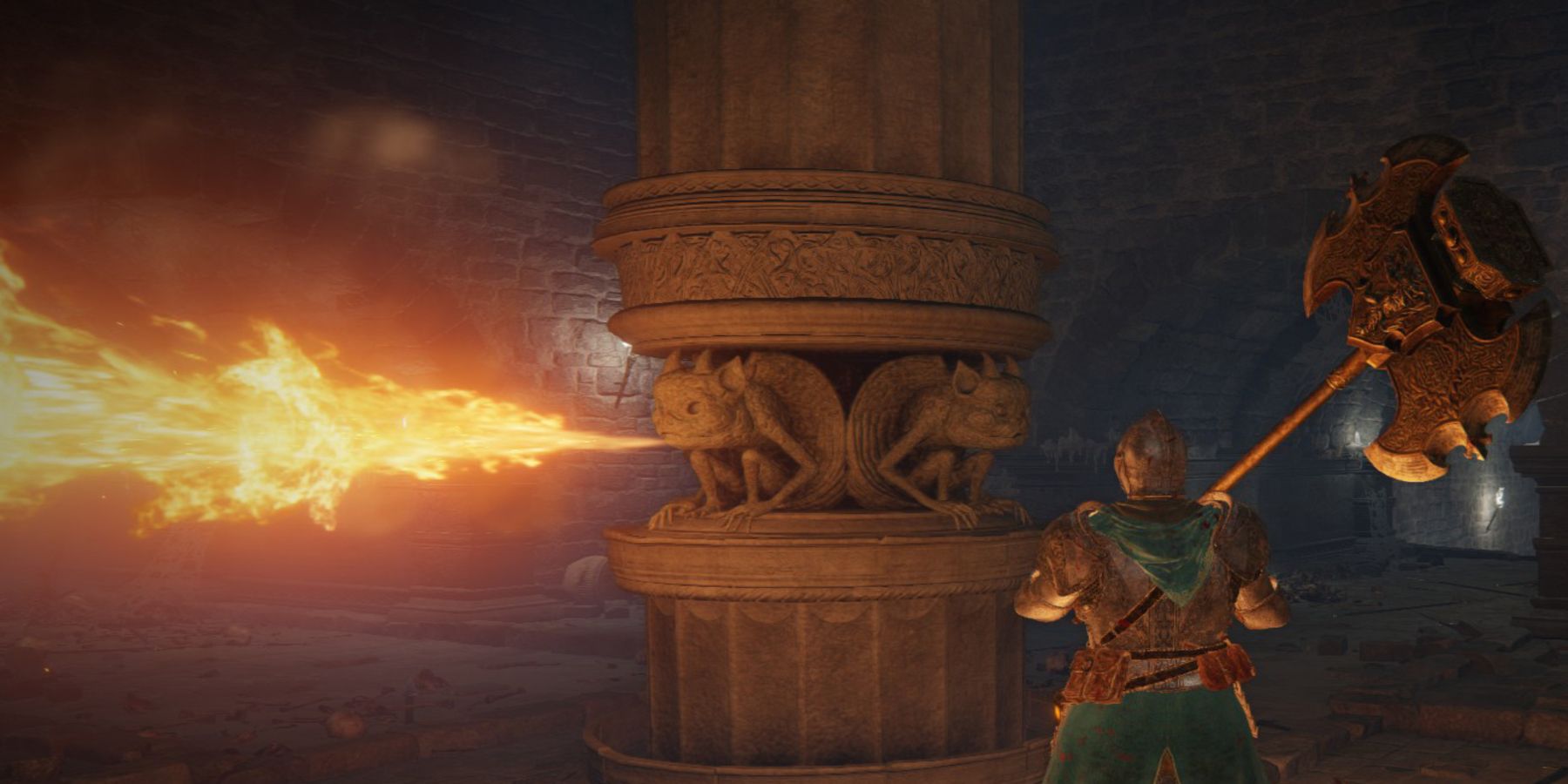 Elden Ring players are continuing to make interesting discoveries within the game, finding different ways to approach certain situations. One recent Elden Ring find should be useful to those that enjoy exploring the game’s dungeons.

Elden Ring has numerous dungeons, and many of these areas are unique in some way. However, while looping dungeons and areas filled with hidden walls are interesting, most of the game’s underground areas reuse some assets. These assets include the Imp enemies that can ambush the player and come to life out of nowhere as well as certain traps. Alongside plentiful blade traps, Elden Ring fans will run into fire pillars quite often, and the strategy to take them down is straightforward.

GAMERANT VIDEO OF THE DAY

Normally, Elden Ring players will need to get right up to the fire traps and hit them, with said hit lowering the trap and allowing them to get by or ride the trap up to a higher level. This can be dangerous, as being hit by the flames of the trap is devastating, though gamers usually have just enough time to run to cover before another burst of fire is delivered. For those that find fire traps too annoying or stressful, though, it could be worthwhile to equip either Mohg or Margit’s Shackle. As pointed out by Redditor WhiteLynx7, this item is like kryptonite for fire traps.

Normally, these Shackles are used to bind the bosses Mohg and Margit to the ground, allowing players to get some free swings in. While they are meant to be useless outside of these very specific scenarios, WhiteLynx7’s clip shows that they can lower fire traps from incredibly far away. While the Redditor does still take a hit from the fire trap, others can use this trick to their advantage to lower the fire pillars safely – completely avoiding the risk that normally comes from getting close to them.

The Benefits of Omen Shackles in Elden Ring

As pointed out in the comments section by Reddit user SeanAker, the Shackles send out a massive AoE attack that hits everything in the nearby area. Normally, this does nothing, though it does impact illusory walls and fire pillars. The reason for this is unknown, but the commenter speculates that this is because the pillars and walls just need to be interacted with instead of damaged, which is why rolling will also deactivate them. With this knowledge in mind, Elden Ring players may want to avoid selling these items after they defeat Margit and Mohg.

While this Elden Ring discovery is hardly game-changing, it is useful, and it could be particularly worthwhile to anyone who despises the game’s traps. With Margit’s Shackle sold by Patches and Mohg’s Shackle found in Leyndell Royal Capital, players may have a few places to visit when they hop back into the game.

A lifelong gamer and comics fan who loves writing about everything in nerd culture… and has a small addiction to trophy and achievement hunting.