Duo accused of duping Secret Service: What were they after? 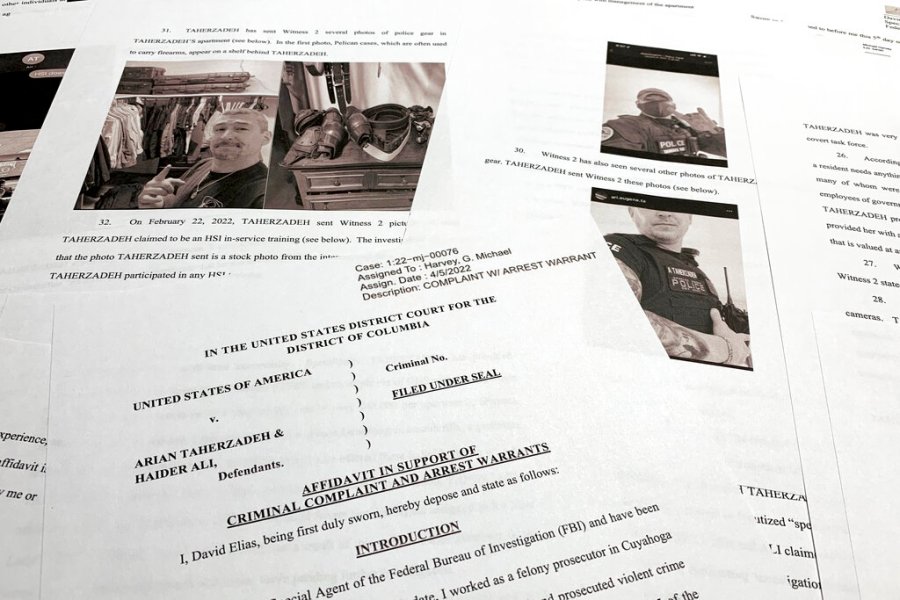 WASHINGTON (NewsNation) — In the nation’s capital, two men are accused of duping members of the agency in charge of protecting the president, his family, and the political elite.

According to investigators, Taherzadeh and Ali pretended to work for the Department of Homeland Security on a task force looking into violence linked to the Jan. 6 insurrection at the US Capitol. That’s how they got a shoo-in with actual law enforcement officers, including a Secret Service agent who worked on the first lady’s security detail.

The Federal Bureau of Investigation reports that at least four agents and officers were at the receiving end of Taherzadeh and Ali’s gifts, including drones, surveillance equipment, cellphones, and rent-free apartments, including a penthouse worth more than $40,000 per year. Those agents are now on administrative leave.

The duo’s ploy unraveled Wednesday night during a raid at their luxury apartment in Washington, in the very same building where some of the Secret Service employees they are accused of making friends with lived. This comes after a postal inspector picked up on their odd behavior and reported it to the Department of Homeland Security and the FBI.

Taherzadeh and Ali are accused of running their scheme for at least two years to ingratiate themselves in the defense and law enforcement community, and a bombshell disclosure in federal court Thursday revealed that one of the men has ties to Pakistani intelligence. Court proceedings also disclosed that Ali has visas from both Pakistan and Iran.

It’s unclear what Taherzadeh and Ali were trying to accomplish, but the question remains: How could this happen?

Dan Emmett, a retired Secret Service agent and the author of “Within Arms Length, A Secret Service Agent’s Definitive Inside Account of Protecting the President,” told “NewsNation Prime” on Thursday that right now, there are a lot more questions than answers in the bizarre case.

“There are some things that have come to light that troubled me a great deal,” Emmett said. “The CIA side of me says that this is an ongoing intelligence operation, one that is not just beginning, but one that has been in progress for quite some time. The other part that really bothers me is that the Secret Service is involved in this.”

As a former agent, Emmett says he hopes the four Secret Service members in question have not done anything in return for Taherzadeh and Ali’s luxurious gifts.

“It looks to me as a former agency, counter intel type, what you have is a couple of people who are masquerading as federal agents who have befriended four people at the Secret Service who have access to the White House and protect (leaders including) Joe Biden and the entire (Biden) family probably, and that they are giving them gifts, they are being friends with them and in return for what? And so my big question is, what has the Secret Service done in return for these gifts, if anything? Nothing at this point, I hope, but that would have been coming down the road at some point. You don’t get something for nothing,” Emmett said.

While appearing Thursday on NewsNation’s “Dan Abrams Live,” Charles Marino, former acting special agent in charge with the US Secret Service, called the situation “startling” and also questioned the gifts.

“It’s starting. There’s no other words here. These objects, items, whatever you want to call them, should never have been accepted by agents of the Secret Service. And in addition to the Secret Service, we have other agencies within DHS, like the US Customs Enforcement service there that does naturalization of citizens. There’s an individual that was caught up from there, as well as individuals from the Department of Defense. So this apartment complex, if you will, was a target-rich environment for the subjects,” Marino said.

Who are Taherzadeh and Ali? Emmett says that’s for the FBI to find out, but he expects clues to come from following the money.

“These people were spending enormous amounts of money on apartments, on gizmos and gadgets, they were giving to the Secret Service. That money was coming from somewhere, and so there’s an old saying, follow the money. And if you do that, I think what’s probably going to be revealed, you’re going to find that the money is going to a foreign Intel service who was employing these two individuals. And that unfortunately looks like to me what’s going on,” Emmett said.

Marino added: “Is it part of a larger foreign intelligence gathering operation? Or is it just two guys that wanted to become members of the law enforcement community and couldn’t, so fake their way through it? But either way, this was a big threat to our national security, no doubt.”

Marino said the amount of money spent and the weapons obtained in an area like DC make him believe a foreign government was involved in the scheme.

“I mean, this fits the MO of a foreign government in terms of intelligence collection on an adversary. I mean, these apartments alone are running close to $50,000 per year per apartment, and then you add in all the other enticements there that you named earlier. So this adds up, and then also the weapons, how are these weapons able to be accessed and obtained so easily by these individuals, especially in a location like DC?

“I mean, even Virginia and Maryland, we’re talking about waiting periods here for these weapons. So how were they able to circumvent (those rules)? Because it appears they did, in fact, circumvent these timeframes in terms of awaiting weapons. . How are they able to get around that to produce these weapons as evidence to these real agents, that they too are part of the Department of Homeland Security? So there’s a lot more questions here. You and I, Dan, both know that the information in the affidavit is the bare minimum to support the charges here,” Marino told Abrams.

With security at the top of mind, Emmett also spoke out about the chances of a postal inspector reporting the duo instead of Secret Service themselves.

“The Secret Service people involved in this, quite frankly, are not paying attention. They’re asleep at the switch. Any rookie agent right out of the academy should know that there’s no such thing as a special police officer from the Department of Homeland Security. Now, why a postal inspector knows that and Secret Service agents don’t know, that is a mystery to me,” Emmett commented, later adding: “What really bothers me is you’ve got these guys with guns, ammunition, tactical gear , all the things in place that look to me to be preparing for an assassination attempt or an abduction.”

What could be happening behind closed doors? Will the four Secret Service agents face any sort of punishment?

“What’s probably been happening all day and maybe even right now, as you and I are speaking, is that the FBI, they are wringing out these four Secret Service types to find out what, if anything, they gave to these two individuals, and what the story was behind the entire thing,” Emmett said on NewsNation Prime. “So, there’s going to be a lot of interviewing going on, a lot of questioning going on. And it’s not going to be a comfortable time for these Secret Service types.”

Marino believes there’s one thing we can be sure of: “That the FBI has a parallel intelligence investigation going on about this. Because what was the ulterior motive of these two individuals and who were they associated with?”

The investigation into Taherzadeh and Ali is ongoing.