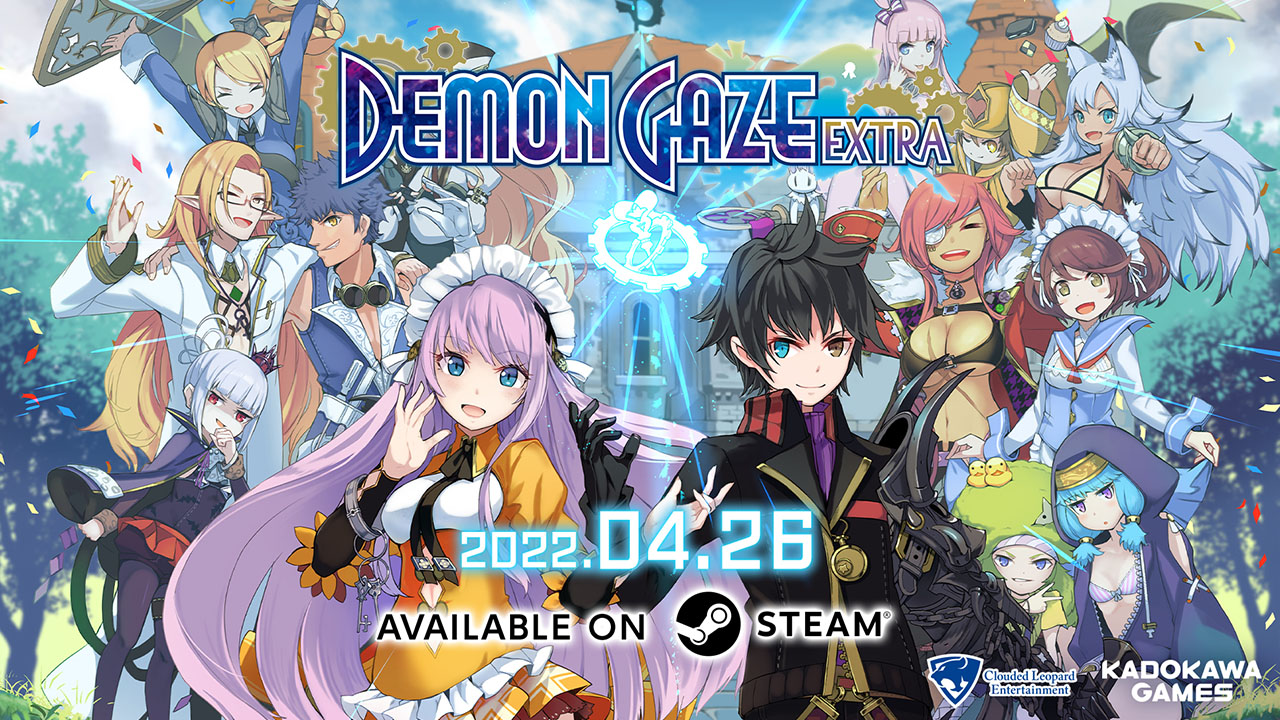 Clouded Leopard Entertainment will release Demon Gaze EXTRA for PC via Steam on April 26 worldwide for $49.99 / 5,980 yen, the publisher announced. It will be available at a 10 percent-off discount price until May 2.

A Digital Premium Edition will also be available for $69.98 / 7,800 yen, which includes the downloadable content “Tons of Fun! Perfect Gem Set,” containing a total of 333 gems (all 25 gem types plus other jewels used as currency) as well as the Demon Gaze EXTRA Memorial Soundtrack.

Get the details below.

What is Demon Gaze EXTRA,

Since its release in Japan in 2013 and overseas in 2014, the original dungeon RPG Demon Gaze was an instant hit.

The game takes place in the Misrid region in the west, a land now desolate and cursed due to a terrible tragedy that occurred long ago. After losing his memory and waking up at the Dragon Inn, the protagonist becomes a bounty hunter using the Demon Gaze, an eye that controls Demons. As a Demon Gazer, he is uniquely capable of taking on the Demons that dwell in the region’s labyrinths.

With its innovative system, engrossing storyline and thrilling challenges, Demon Gaze EXTRA retains its original flavor while adding enhanced graphics and a number of new elements for an even greater gameplay experience.

This gem is guaranteed to delight past Demon Gazers, as well as new fans of dungeon RPGs!

The game takes place in the Misrid region, where there are many unique labyrinths above ground, underground, and even underwater. Remastered graphics give dungeon-crawling a more realistic feel!

When the hero returns from a labyrinth, he is greeted at the Dragon Inn by a group of characters, all with unique personalities. The atmosphere here is cheerful, fun, and sometimes even serious.

Use the Demon Gaze to hunt down android-like lifeforms known as Demons!

Demons are android-like creatures that suddenly appeared in Misrid, and when they unleash their true power, they reveal even more vicious abilities.
If you defeat these masters of the labyrinths, you will gain abilities unique to each Demon’s personality. You can also use the Open Demon command to summon them to participate in battle.

While the original Demon Gaze had its fans, some players may have been discouraged by its challenging gameplay style.

In Demon Gaze EXTRA, various elements have been tweaked, including the addition of a high-speed battle function, a retry function, and an enhanced autopilot function. Now, even dungeon RPG beginners need not fear!

The enhanced autopilot function is a streamlined version of the revolutionary feature from the original Demon Gaze, This, along with the addition of a high-speed battle function speeds up repeated battles in dungeons, allowing players to explore labyrinths more easily. In addition, Demon Gaze EXTRA has a retry function that allows players to go back to the beginning of a battle and try again in the event of a defeat.

From the middle of the game, the all-new job category Machina unlocks. After clearing the story, players can obtain unique items from subsequent playthroughs and use Demon Gaze EXTRA‘s new item synthesis feature to customize legendary equipment.

Demon Gaze EXTRA for Steamoffers Japanese, English, Traditional Chinese, and Korean subtitles, allowing players to enjoy the game in the language of their choice. In addition to the original Japanese, English audio is also available for more global appeal.

The Digital Premium Edition includes the “Tons of Fun! Perfect Gem Set” downloadable content, which contains a total of 333 gems (all 25 gem types, as well as other jewels used as currency), as well as the Memorial Soundtrack OST.

The early bird bonus (for purchases made by 23:59 PM PDT on May 9, 2022) includes the “Healing Wand and Armor Gem Assortment Set” downloadable content bundle.

Launch Sale: 10 Percent Off for One Week Only!

To celebrate the launch of the Steam version, a limited time sale event will take place from the time of release until 11:00 am PT on Monday, May 2, 2022. During this period, the Standard and Digital Premium Editions for Steam will be 10 percent off!

Watch a new trailer below. View a new set of screenshots at the gallery.