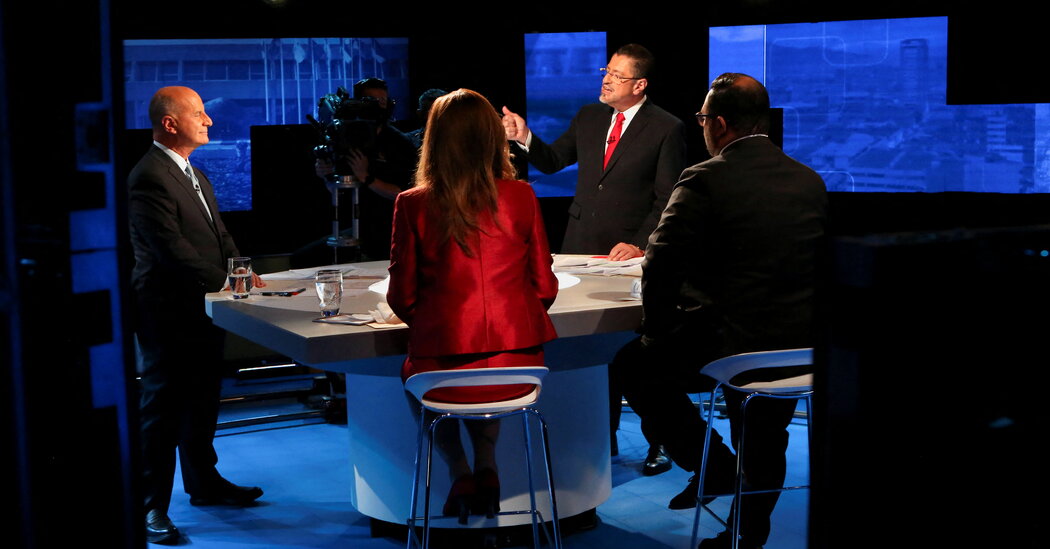 Costa Ricans are choosing their next president on Sunday in an election seen as a referendum on the future of the 70-year-old political system of Central America’s most stable and prosperous nation.

The election, a runoff, pits José María Figueres, a former president and scion of Costa Rica’s most prominent political family, against Rodrigo Chaves, a former senior World Bank official, who shot to prominence by presenting himself as an outsider amid growing popular discontent with the Latin American political establishment.

Both candidates have been marred by scandals, which contributed to the lowest turnout since the 1940s in the first round of elections, held in February. Only one in four registered voters cast their ballots for one of the two candidates standing for office on Sunday, fragmenting the party system that has kept Costa Rica out of Central America’s political upheavals but has come to be seen by most citizens as corrupt and out of touch with people’s everyday problems.

Mr. Chaves has been embroiled in a campaign financing scandal, and he has fought to downplay and misrepresent a World Bank sexual harassment investigation against him. Mr. Figueres has struggled to shake off allegations of corruption dating from his first presidency in the 1990s.

“Costa Ricans are turning away from their political parties,” said James Bosworth, founder of the Latin America-focused political consultancy Hxagon. The country, he said, “is going to have a hard time solving its challenges without that strong political system.”

Those challenges include financing Costa Rica’s large public sector and social spending commitments, reactivating its service-dependent economy after the pandemic and protecting its pristine environment from the effects of climate change.

The state-run University of Costa Rica found Mr. Chaves narrowly leading Mr. Figueres going into the vote. In a poll of just over 1,000 voters conducted by the university from March 24 to March 28, Mr. Chaves led by 3.4 percentage points, slightly above the survey’s margin of error of 3.1 percent.

Mr. Chaves, a US-educated economist, has risen from relative obscurity to the front-runner position over the last several months by presenting himself as an outsider who will confront the country’s aloof elites by bypassing traditional democratic institutions. He has promised to “return power to the people” by holding referendums on pressing policy issues.

To emphasize his image as an underdog, Mr. Chaves has repeated in the campaign that his father was the bodyguard of Mr. Figueres’s father, José Figueres Ferrer, a nation-defining figure who built Costa Rica’s largest political party after leading the winning fact in the country’s brief civil war in the 1940s. Mr. Figueres said on Friday that Mr. Chaves’s father “never” worked for his family.

Mr. Chaves, 60, returned to Costa Rica in 2019 after 27 years at the World Bank, where he rose to the rank of director as the bank’s senior representative in Indonesia, a major developing economy. He left the bank just days after he was demoted for misconduct following a sexual harassment complaint brought against him by two female employees.

He has brushed off the allegations by claiming the investigators never proved that sexual harassment had taken place, a claim that was contradicted by the verdict of the World Bank’s internal tribunal in June, issued nearly two years after Mr. Chaves left the bank.

And in recent weeks, Mr. Chaves was damaged by an investigation begun by Costa Rica’s electoral court into irregular payments that a group of allied businessmen funneled to his campaign. Mr. Chaves said he did not know that those funds existed.

Mr. Figueres has focused his campaign on attacking Mr. Chaves’s relative lack of political experience, asserting that the country needs a proven administration after years of disruption brought on by the pandemic.

But Mr. Figueres has been unable to distance himself from his own corruption allegations, which are related to consulting fees he received from a French telecommunications company after finishing his first presidential term in 1998.

Mr. Figueres denied he gave the company preferential treatment while in office, and prosecutors who investigated the payments, which occurred between 2000 and 2003, did not press charges. Yet Mr. Figueres’s decision to wait out the results of the investigation in Europe, where he was living at the time, left a lasting impression of wrongdoing among many Costa Ricans.

Both candidates declined to be interviewed for this article.

Whoever wins, the country’s divided Congress and heavy debt load will make it difficult for either candidate to govern effectively and make good on his promises to boost social spending and halt rising inequality and crime, said Mr. Bosworth, the analyst.

“You’re going to get a cycle where people become increasingly disillusioned with the political system,” he said. “Neither one of them has a popular platform that will be able to meet expectations.”