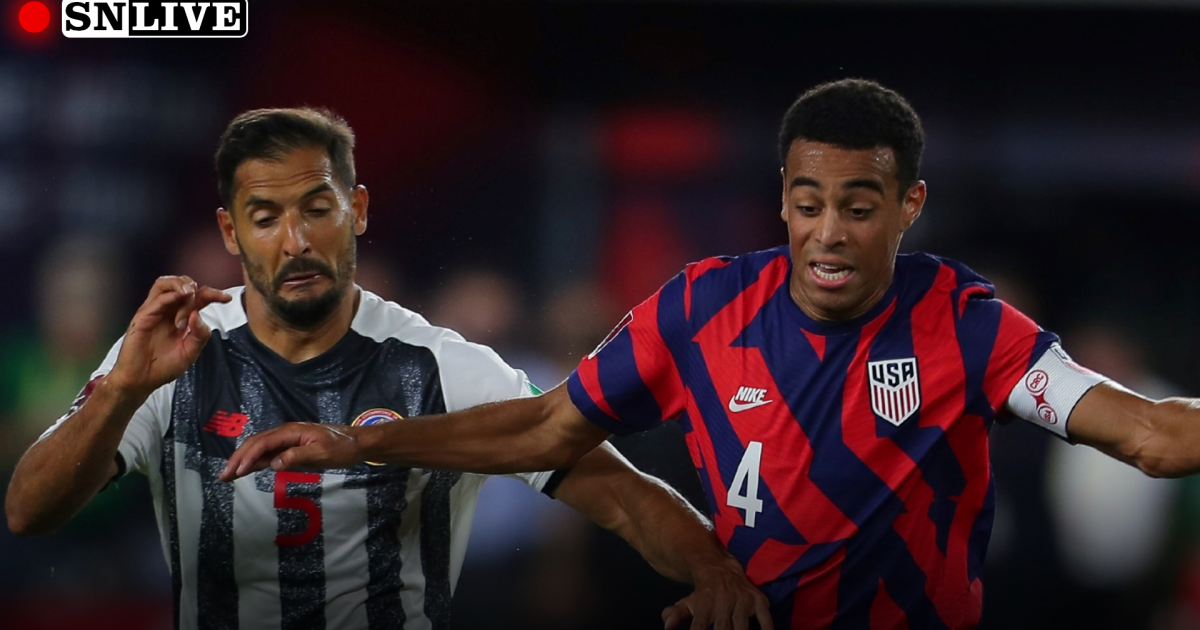 Little doubt remains for the 2022 World Cup status of the United States, but the job is not yet officially done.

That’s the task as the USMNT travels to Costa Rica, a traditional House of Horrors destination, but still not a place likely to rob the US of a place in Qatar, like Trinidad and Tobago so cruelly did four years ago.

The United States has never won a World Cup qualifying match in Costa Rica, or even garnered a single qualifying point there, but it would require a cataclysmic six-goal defeat to snatch a spot at the 2022 World Cup from the USMNT’s clutches.

Still, the team has preached that no spot is safe until it is mathematically secured, and the US will look to not only pick up a historic result on Costa Rican soil, but officially confirm a return to soccer’s greatest tournament in doing so.

Sporting News will be following the match live and providing score updates, commentary and highlights as they happen.

MORE: Which teams are in the 2022 FIFA World Cup draw?

7:49 pm: History be damned! The US has never even collected a point on the road at Costa Rica in World Cup qualifying before, but bettors are backing the US to clinch in emphatic fashion tonight nonetheless.

The United States Men’s National Team can clinch a spot in the World Cup tonight.

90% of ML bettors are riding with Team USA vs. Costa Rica tonight pic.twitter.com/UcOzeVTUTi

7:22 pm: It’s been a while since the US qualified for a World Cup…but who’s counting?

It has been 3,123 long days since we last qualified for a Men’s World Cup. Today is the day we change that America pic.twitter.com/pBwYrGyEKy

7:10 pm: The new FIFA match ball for the 2022 World Cup was released today. Can the US secure a spot in the tournament and position itself to be playing with this adidas beauty come November?

️ ‘Al Rihla’, the Official Match Ball of the 2022 Qatar #worldcup has been released.

Where does it rank against balls from recent tournaments? pic.twitter.com/EAqtArlQsF

7:00 pm: The United States just needs to avoid a loss by six goals or more to qualify for the World Cup. The US hasn’t lost a match by a scoreline that bad since a 6-0 loss to France at the Meadowlands in 1979. Bernard Lacombe scored a hat trick in that match, three of his 12 career international goals for Les Blues.

With the 5-1 win over Panama Sunday night, the USMNT has a 6-goal buffer between them and the last automatic qualification spot in CONCACAF.

They will qualify for Qatar if they avoid losing their last qualification match by 6 goals, something the USMNT has avoided since 1979. pic.twitter.com/ZmFTvyleW7

Due to CONCACAF and FIFA’s World Cup qualifying yellow card suspension rules, there is an enormous amount of uncertainty regarding Costa Rica’s possible starting lineup against the United States.

While only red card suspensions picked up in World Cup qualifying carry over to the World Cup itself, yellow card suspensions do carry over to the intercontinental playoff. Costa Rica has a whopping nine players who would earn a suspension with a yellow card, including Francisco Calvo, Bryan Oviedo, Celso Borges, Joel Campbell, Alonso Martinezand Keysher Fullerall of whom started the last match against El Salvador, plus substitutes Bryan Ruiz and Johan Venegas.

Therefore, there’s speculation that Costa Rica will proceed with a game plan against the US that utilizes a “B” team, conceding to the unlikelihood of direct qualification and instead securing its best players are available for selection in the intercontinental playoff in June.

Costa Rica subs (11): (Lineups released one hour prior to kickoff)

Despite the “Qualified” banner mishap, the United States has preached since the end of the Panama match that the job is not quite done. And unlike Costa Rica, unless disaster strikes, yellow card suspensions are no longer a worry, as those do not carry over into the World Cup itself. So a strong XI is expected.

Tim Weah should return from his yellow card suspension to start on the wing, as Paul Arriola was withdrawn at halftime of the Panama match and reportedly unlikely to play in Costa Rica. Reggie Cannon is back from his COVID-19 bout, and will likely be deployed as the third starting right back for this US in this window alone.

If anyone is to be rested, Christian Pulisic could be a candidate after he led the team with a passionate 60 minutes on Sunday, but Berhalter withdrew him in the 60th minute against Panama, likely saving his legs for the clinching match. Antonee Robinson may also have earned some rest after going the full 90 minutes in both matches so far.

Gio Reyna has not started a match this window due to his hamstring recovery and a stomach bug picked up in Mexico, and Berhalter indicated he’s still feeling the effects of it, so a starting spot for Reyna isn’t likely, although he could again be used off the bench. Luca de la Torre was excellent in each of his last two starts against Honduras and Panama, and either he or Gianluca Busio will likely be tabbed for a midfield start.

in-form goalkeeper Ethan Horvath could be an option in goal after Berhalter stated earlier in the window that players not starting for their clubs (hint: Zack Stephen) should’t be expected to start all three matches. And after a quality showing against Panama, Jesus Ferreira may have earned another look.

USA subs (11): (Lineups released one hour prior to kickoff)

How to watch Costa Rica vs. USA

Wednesday’s match between the United States and Costa Rica from the Estadio Nacional in San Jose, Costa Rica will be broadcast on CBS Sports Network (English) and Universo (Spanish) in the USA.

Those channels are streamed on fuboTV, and new users can take advantage of a free trial. The match will also be streamed on Paramount+ for subscribers.

US fans have been mulling over how Berhalter should play this match, but the sportsbooks aren’t looking at this match with such a complicated lens. This is a match between a team that struggles to score and is likely to put out a “B” team against a team that has been historically awful at this venue.

The US isn’t an overwhelming favorite, but still with plus odds to come away victorious. Also, a low scoring game is expected. The sportsbooks are probably not wrong on both counts.

Historically, the US has scored one goal or fewer in every World Cup qualifying match in Costa Rica except one. More recently, the US has one road goal this entire World Cup qualifying cycle when you remove a 4-0 win over last-placed Honduras. On the other hand, Costa Rica hasn’t scored more than two goals in any match this entire qualifying cycle, and has been shut out more times (five) than it has scored two goals in a match (three occasions).

With the US happy to sit back and allow Costa Rica’s sputtering attack to possess the ball while hitting on the counter — which is exactly what it did to Panama at home — this should be a comfortable match for the United States with plenty of wiggle room. While the US struggles against teams that play counter-attacking ball, they showed on Sunday they can be lethal on the break.

Sadly, the under is set so low (at just 2 goals) that it’s not a viable option, so go for a US win against a chopped and changed Costa Rican lineup that allows for raising the under bar.