Colwell: Things would surely be different in Ukraine if Trump were president 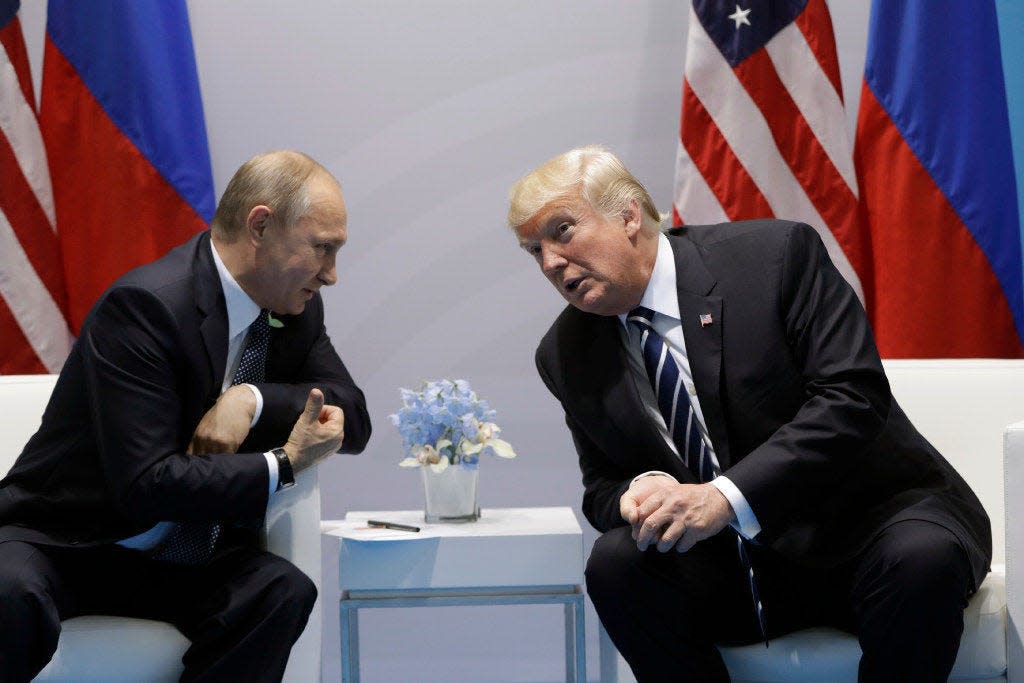 Donald Trump is right. If he were still president, the situation would be far different in Ukraine.

If Mike Pence had ignored his Hoosier values ​​of truth, justice and the Constitution and cooperated in overturning the election results, Trump could now be president.

There would be no danger of armed conflict between Russia and NATO over Ukraine.

There would be no NATO. Trump contended throughout his first term that NATO was outdated. He belittled and insulted leaders of European nations in the alliance. He was reluctant to support the collective-defense agreement known as Article 5. By now in a second term, he would have pulled out of the alliance and scuttled it.

There would be no suggestion from a President Trump that Vladimir Putin is a butcher and must go after Russia invaded Ukraine. Trump praised the “genius” of Putin as Russia amassed troops for the invasion. And he wouldn’t let a little thing like Russia seeking to dominate its neighbor ruin his bromance with Putin. Hey, he pulled out of Syria and let Russia dominate there.

There would be no long, heroic stand by Ukrainian President Volodymyr Zelenskyy. He would have been dead a month ago. Trump holds a grudge. Zelenskyy didn’t announce an investigation of Joe Biden before the election, even when Trump held up needed defensive weapons for Ukraine to force it. Fervent Trump supporters like Reps. Marjorie Taylor Greene and Madison Cawthorn haven’t forgotten. They call Zelenskyy a “thug” and “corrupt.” Trump, if still president, wouldn’t forget and wouldn’t coordinate massive arms shipments and sanctions to save Zelenskyy and thwart friend Putin.

There would be no Ukraine. Without the United States and a unified NATO providing the help to stall the invasion, Russia would have smashed into Kyiv and disposed of Zelenskyy, still with a terrible toll in Ukraine civilian deaths but with less delay against an outgunned Ukrainian military left without needed weapons.

Trump, though no longer president, still speaks out, claiming that he really won re-election and demonstrating how he would be responding to Putin if still in the White House.

Trump calls for Putin to do something now, something very important.

Trump resurrected and embellished a controversial, last-minute 2020 campaign contention that Hunter Biden might have (or might not have) received money through funding of a firm by the wife of Moscow’s mayor.

“She gave him $3.5 million,” Trump stated as fact. Why? “I would think Putin would know the answer to that. I think he should release it,” Trump said. “I think we should know that answer.”

Putin would of course be believed if he announced, “Yes, the Bidens accepted millions in bribes along with that thug Zelenskyy to set up a Nazi government and germ warfare labs in Ukraine.”

Well, US intelligence agencies didn’t believe Putin’s claims that troops on Ukraine’s border weren’t going to invade. They wouldn’t believe he had turned truthful now after a life of lies.

But Trump would believe. He famously declared at a meeting with the Russian leader that he believed the word of Putin over findings of his own intelligence agencies.

If Putin did provide dirt helpful for Trump’s election in 2024, it would pretty much cinch that Trump, if president again, would approve Putin’s conquest of Ukraine and signal no concern over Putin’s desire to return other countries, Poland, Hungary and the Baltics, to their status in the old Soviet Union.

While investigations continue into what Hunter Biden and Donald Trump Jr. might have done wrong, the possible transgressions of either child of a president, proven or not, shouldn’t hinder the efforts to save all those children in Ukraine.

Jack Colwell is a columnist for The Tribune. Write to him in care of The Tribune or by email at jcolwell@comcast.net.

This article originally appeared on South Bend Tribune: If Trump were president, the situation would be different in Ukraine.