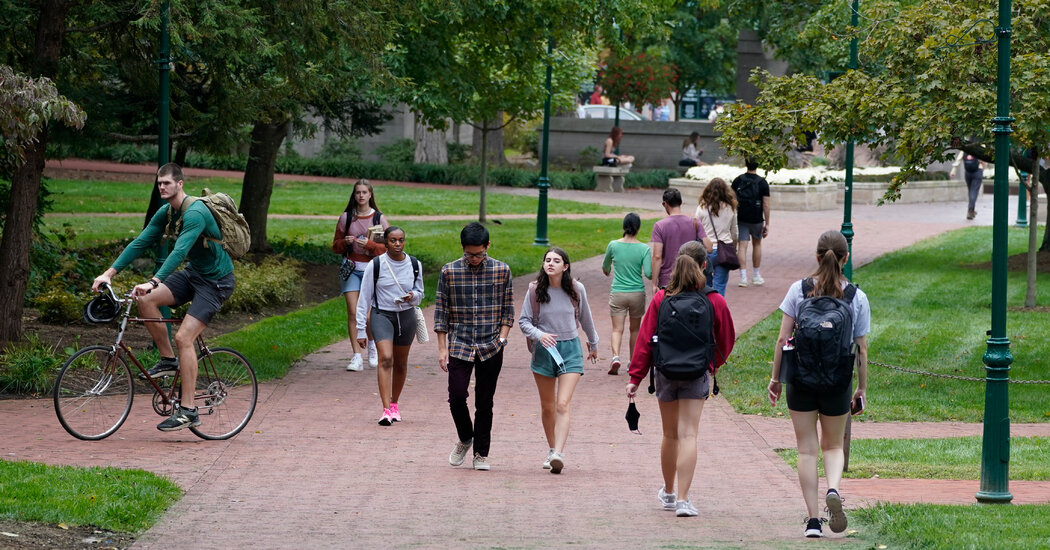 The ongoing enrollment crisis at US colleges and universities deepened in spring 2022, raising concerns that a fundamental shift is taking place in attitudes toward the value of a college degree – even as the coronavirus pandemic has disrupted operations for higher education.

The latest college enrollment figures released on Thursday by the National Student Clearinghouse Research Center indicated that 662,000 fewer students enrolled in undergraduate programs in spring 2022 than a year earlier, a decline of 4.7 percent. Graduate and professional student enrollment, which had been a bright spot during the pandemic, also declined 1 percent from last year.

Doug Shapiro, the center’s executive director, noted small gains in first-year, first-time students. However, he suggested that the numbers and the breadth of the declines indicate an underlying change, as students question whether college is the ticket to the middle class and a good-paying job.

“That suggests it’s more than just the pandemic to me; it’s more than just low-income communities that are primarily served by community colleges, ”Dr. Shapiro said during a conference call with reporters. “It suggests that there’s a broader question about the value of college and particularly concerns about student debt and paying for college and potential labor market returns.”

Prospective college students may be weighing the relative value of jobs that require or expect a college degree against equally attractive opportunities that do not, he said.

Overall, total undergraduate enrollment has dropped by nearly 1.4 million – or 9.4 percent – during the pandemic. When the pandemic emerged in spring 2020, many colleges moved to online instruction, and some students did not report to campus at all, changes that considerably altered the traditional college experience.

Even before the pandemic, though, college enrollment had been dropping nationally, with institutions of higher learning buffeted by demographic changes, as the number of college-age students leveled off, as well as questions about student debt. A highly polarizing immigration debate also drove away international students.

While elite colleges and universities have continued to attract an overflow of applicants, the pandemic has been devastating for many public universities, particularly community colleges, which serve many low- and moderate-income students.

Declines occurred generally across the country but were slightly more pronounced in the Midwest and Northeast.

Overall, enrollment at public colleges and universities declined by more than 604,000 students in spring 2022, or 5 percent. Within the public sector, community colleges dropped the most, losing 351,000 students or 7.8 percent.

All told, community colleges around the country have lost 827,000 students since the pandemic began in spring 2020, according to figures released by the research center. It collects and analyzes data from more than 3,600 postsecondary institutions for industry use.

In what Dr. Shapiro called possible signs of a “nascent recovery,” first-time, first-year enrollment increased in spring 2022 by 13,700 students, or 4.2 percent, over last spring.

“It really remains to be seen whether this will translate into a larger freshman recovery in the fall,” Drs. Shapiro said.

The increase did not extend to Black students, according to a special demographic analysis by the clearinghouse, which found that Black freshman enrollment declined by 6.5 percent, or 2,600 students. In total, there were 8,400 fewer Black freshmen than in 2020.

In releasing its figures, Tennessee’s higher education commission also cited what it called “notable disparities” between Black and Hispanic students and white students.

Overall, Dr. Shapiro said the numbers were discouraging, steeper than what the organization reported for the fall term.

“I thought we would start to see some of the declines start to shrink a bit this term,” he said. “I am surprised that it seems to be getting worse.”

One of US Rep. Lauren Boebert's most prominent...