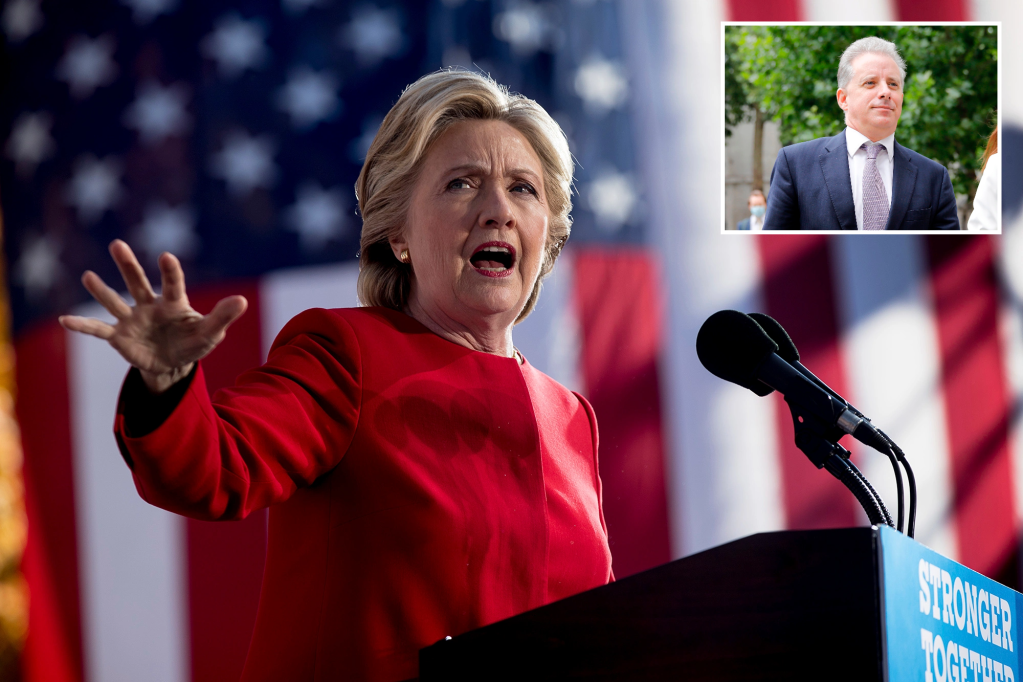 The Federal Election Commission has fined both Hillary Clinton’s 2016 presidential campaign and the Democratic National Committee for lying about how they spent money used to fund the now-debunked Steele dossier on former President Donald Trump.

The Clinton campaign and the DNC will be forced to pay $8,000 and $105,000 respectively for mislabeling payments that ultimately went to Fusion GPS, the consulting firm that commissioned the dossier, according to FEC documents viewed by the Post.

The fines stem from a complaint originally filed in 2018 by the Coolidge Reagan Foundation, which was informed of the outcome on Tuesday.

The Clinton campaign and the DNC paid more than $1 million combined to powerful Democratic law firm Perkins Coie, which engaged Fusion GPS to dig for dirt on Trump. Fusion GPS, in turn, hired former British spy Christopher Steele — whose namesake dossier included that Russian security services possessed a tape of Trump in a Moscow hotel room with prostitutes who were supposedly urinating on a bed where the Obamas had previously stayed.

The FEC said Clinton and the DNC claimed the money given to Perkins Coie to hire Fusion GPS was reported on disclosure forms as having gone toward “legal advice and services” rather than opposition research.

The commission ruled it had found probable cause that both the Clinton campaign and the DNC had violated election law by not being “sufficiently specific” about the purpose of the payments and not including detailed information about Fusion GPS in the disclosure forms.

Both the Clinton campaign and the DNC did not admit the FEC’s finding, but said they “will not further contest the commission’s finding of probable cause,” according to documents reviewed by the Post.

Lawyers for both Democratic entities maintained the payments were reported “in accordance with the law and Commission guidelines,” claiming Fusion GPS’ work would assist Perkins Coie in providing legal advice. They also argued that Fusion GPS’s work was protected under attorney-client privilege.

Despite its murky sourcing, the dossier was used by the feds between October 2016 and September 2017 to successfully apply for surveillance warrants targeting former Trump campaign adviser Carter Page.

In November, Igor Danchenko, described as a key source for information in the dossier, was arrested and charged with lying to the FBI about the sources he tapped for his dubious intelligence.

Danchenko was nabbed as part of special counsel John Durham’s investigation into the origins of the FBI’s Russia probe, which Trump has long insisted was a witch hunt.

Former President Donald Trump said the ruling confirmed his belief that the 2016 Democratic candidate perpetrated a major hoax against his campaign.

“Wow! Just out that the 2016 Clinton Campaign and the DNC paid the FEC today for violating the law by failing to disclose that their payments for ‘legal advice and services’ to law firm Perkins Coie was, in fact, a guise to hire numerous companies, all of whom are now named Defendants in my lawsuit, to try and take down and illegally destroy your favorite President, me,” he said in a statement.

“This was done to create, as I have stated many times, and is now confirmed, a Hoax funded by the DNC and the Clinton Campaign. This corruption is only beginning to be revealed, is un-American, and must never be allowed to happen again. Where do I go to get my reputation back?”