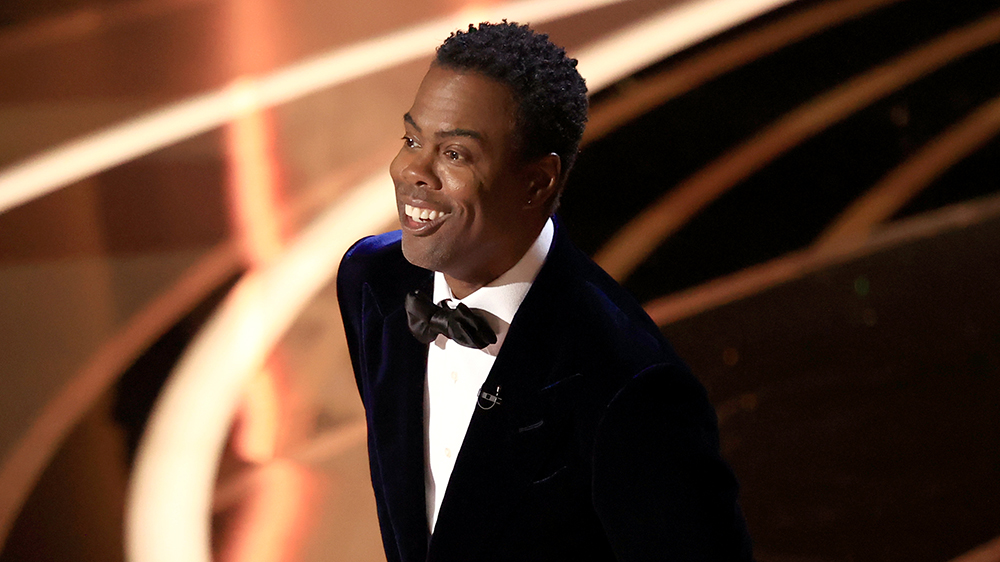 It’s a simple yet valid question, one that the world is wondering after Will Smith slapped the comedian on live television during the Oscars on Sunday. The now-infamous blow has been the topic du jour on every corner of the internet and television in the 48 hours since — but Rock has remained noticeably silent. That is until Wednesday evening, when Rock addressed the topic publicly at a standup show in Boston.

“Whoa, okay!” he exclaimed upon entering the stage in an all-white suit. The standing ovation from the crowd thundered on before Rock made another effort to get the ball rolling for the evening: “Yo, let me do the show!”

After a few more moments of applause, Rock immediately addressed the elephant in the room.

“How was your weekend?” he began, drawing a wave of laughter. “I don’t have a bunch of shit about what happened, so if you came to hear that, I have a whole show I wrote before this weekend. I’m still kind of processing what happened. So, at some point I’ll talk about that shit. And it will be serious and funny.”

An audience member then chanted “Fuck Will Smith!” before Rock continued.

“I’m going to tell some jokes. It’s nice to just be out,” he said before beginning his material.

There were at least a dozen local broadcast journalist set up outside the theater as early as two hours before showtime, bundled up in the thirty degree New England weather.

“This is insane,” one onlooker shouted as he walked by troves of cameras and on-air reporters around 6 pm

Prior to showtime, local religious leaders gathered outside the Wilbur Theater to make a statement about “the incident regarding our brothers” and “send a message that violence is not the way to resolve conflict.”

“This is a teachable moment so we end the cycle of violence that is underreported in the Black community,” said Kevin C. Peterson, founder of the New Democracy Coalition, a non-partisan and non-profit organization that focuses on civic engagement, to a small crowd of reporters.

Event organizers at the Wilbur were not pleased with the masses that gathered outside.

“We have to get ready for a show,” said one Wilbur employee as he attempted to put up ropes outside the venue. “We’re trying to work now.”

Boston resident Sam Wisnia, 24, felt it was “serendipitous” that Rock was scheduled to make his first public appearance only a short distance from his hometown. He got tickets on Monday morning following the Oscars and acted early enough that he only paid $70.

“I didn’t watch [the Oscars] live but I watched the clip plenty of times,” Wisnia said. “I hope he leads [his set] with the whole situation and he can find the humor in it.”

Another Boston local Jesse Setaro, 32, saw an Instagram ad for Rock’s show “after he got smacked.” He paid $225 and considers that a steal compared to what others paid.

Setaro was unfazed by the frenzy of reporters outside the theater: “Why wouldn’t they be here? it’s a historic night.”

Rock’s taciturnity is perhaps the reason that ticket sales for Rock’s stand-up comedy tour have been nearly impossible to come by. By coincidence, Rock was booked to play several shows in Boston beginning on Wednesday before he embarks on his “Ego Death World Tour” next month, starting in New Jersey. It’s the first time that Rock has gone on the road in five years.

His four-day stint in Boston commenced on Wednesday at the 1,000-seat Wilbur Theater, with one sold-out show at 7:30 pm and another at 10 pm COVID-19 vaccinations were mandated for attendees.

Tickets went quickly on Ticketmaster and were being resold on StubHub and other ticket exchange and resell websites for astronomically high prices. Original prices started at $49.50, but, in the wake of the shocking incident at the Oscars, they were going for as much as $800 to $8,000 on secondary sites. Admission to the 7:30 pm show was in especially high demand because many anticipated it would be the first time Rock would publicly respond to Smith’s violent outburst.

A StubHub representative said the site experienced “more than 25 times the daily sales” over the past two days compared to the last month. “It is incredibly unusual to see the spike we have experienced,” said Mike Silveira, spokesperson for StubHub. Similarly, the online ticket reseller TickPick wrote Monday on Twitter“We sold more tickets to see Chris Rock overnight than we did in the past month combined.”

The incident in question occurred in the middle of the 94th annual Academy Awards, as Rock presented the best documentary feature category on stage. The comedian began riffing about A-list celebrities in the audience before going off script to made a joke about Smith’s wife, Jada Pinkett Smith and her shaved head. (The actress has alopecia, a medical condition that results in hair loss.)

“Jada, I love you: ‘GI Jane 2,’ can’t wait to see it,” Rock said referring to the 1997 action movie in which Demi Moore’s character has a shaved head.

Smith initially laughed at the jab. But after turning to Pinkett Smith and noticing her epic eye-roll at the joke, he quickly shifted gears and walked on stage to slap Rock in the face. At first, everyone — Rock included — thought the rouse was a bit, but it soon became clear that wasn’t the case.

“Oh, wow,” Rock said as Smith walked off stage. “Wow. Will Smith just smacked the shit out of me.”

After returning to his seat, Smith yelled, “Keep my wife’s name out your fucking mouth.”

Rock responded, “Wow, dude. It was a ‘GI Jane’ joke.” That prompted Smith to shout at a louder octave, “Keep my wife’s name out your fucking mouth!”

Rock appeared visibly shaken on stage and struggled to collect his thoughts. “That was, uh, the greatest night in the history of television,” he offered.

Shortly after the incident, Smith was awarded the Oscar for best actor for his performance as tennis coach Richard Williams in “King Richard,” a feel-good sports drama in which he plays the father of tennis icons Venus and Serena Williams. In a tearful acceptance speech, Smith apologized to the Academy and his fellow best actor nominees, but he stopped short of mentioning Rock. In his remarks, he also attempted to connect the altercation to his onscreen character in “King Richard.”

“Richard Williams was a fierce defender of his family,” Smith said. “Art imitates life. I look like the crazy father, just like they said about Richard Williams.”

Later in his speech he said, “In this business, you got to be able to have people disrespecting you. And you got to smile and you got to pretend like that’s okay.”

On Monday, Smith issued an apology to Rock on Instagram. “I would like to publicly apologize to you, Chris. I was out of line and I was wrong. I am embarrassed and my actions were not indicative of the man I want to be.” He also said, “Jokes at my expense are part of the job, but a joke about Jada’s medical condition was too much for me to bear and I reacted emotionally.”

Rock declined to press charges, but the Academy has launched an investigation into the situation to “explore further action and consequences,” a spokesperson said.

Of timeless pieces, Liz and the Piranesi woman