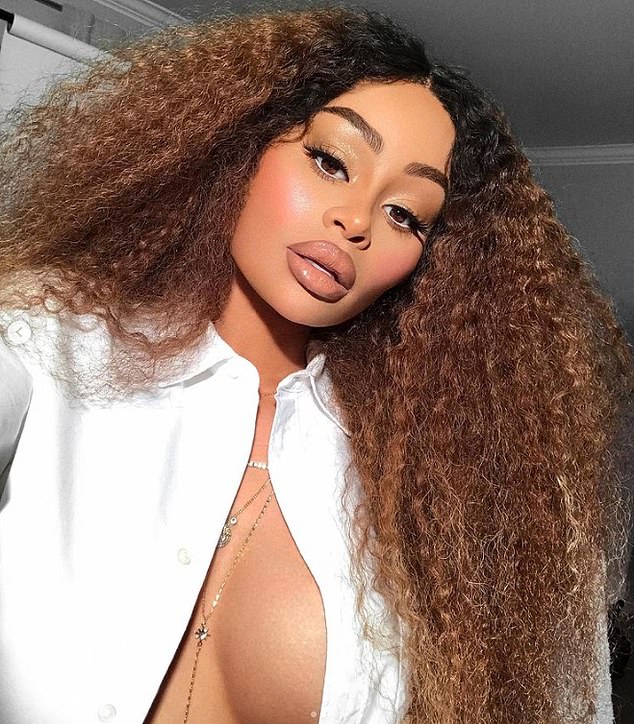 Blac Chyna claimed this weekend that the Kardashians ‘hurt me financially and emotionally’ and ‘hurt my beautiful KIDS’ by allegedly getting her reality show Rob And Chyna canceled.

The 33-year-old model – who shares her daughter Dream, five, with her ex Rob Kardashian – tweeted a new statement regarding her legal battle against his mother Kris Jenner and his sisters Kim Kardashian, Khloe Kardashian and Kylie Jenner.

Chyna has spent years insisting that Kris, Kim, Khloe and Kylie connived to help get Rob And Chyna axed. Meanwhile Rob’s attorney Marty Singer has previously argued that Chyna and Rob’s breakup is what caused the reality series to end.

Allegations: Blac Chyna claimed this weekend that the Kardashians ‘hurt me financially and emotionally’ and ‘hurt my beautiful KIDS’ by allegedly getting her reality show canceled 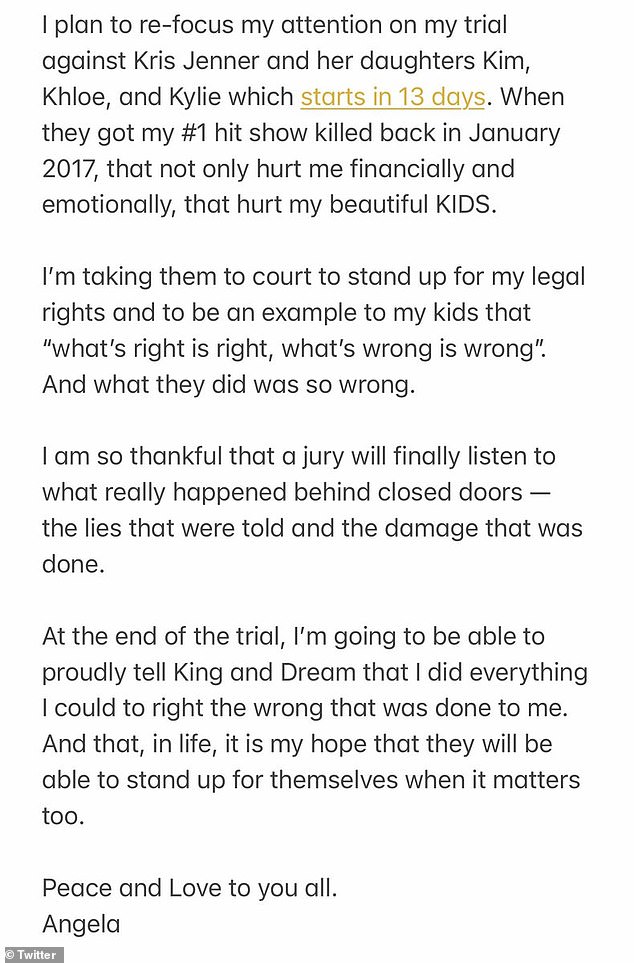 ‘Taking them to court’: She tweeted a new statement regarding her legal battle against his mother Kris Jenner and his sisters Kim Kardashian, Khloe Kardashian and Kylie Jenner

Tyga has his own connection with the Kardashian-Jenner family, as he dated Kylie when she was a teenager and he was in his 20s.

‘I plan to re-focus my attention on my trial against Kris Jenner and her daughters Kim, Khloe and Kylie which starts in 13 days,’ Chyna declared on Twitter this Saturday.

‘When they got my #1 hit show killed back in January 2017, that not only hurt me financially and emotionally, that hurt my beautiful KIDS,’ she continued. 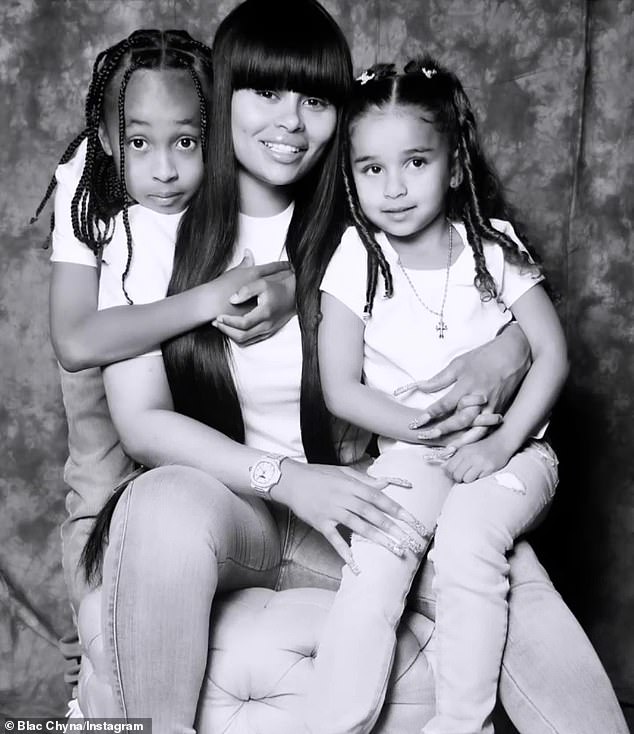 ‘I’m taking them to court to stand up for my legal rights and to be an example to my kids that “what’s right is right, what’s wrong is wrong.” And what they did was so wrong,’ the statement went on.

‘I am so thankful that a jury will finally listen to what really happened behind closed doors – the lies that were told and the damage that was done. At the end of the trial, I’m going to be able to proudly tell King and Dream that I did everything I could to right the wrong that was done to me.’

She concluded: ‘And that, in life, it is my hope that they will be able to stand up for themselves when it matters too. Peace and Love to you all. Angela.’

Her latest broadside comes after both Rob and Tyga struck back when she of not receiving child support from them. 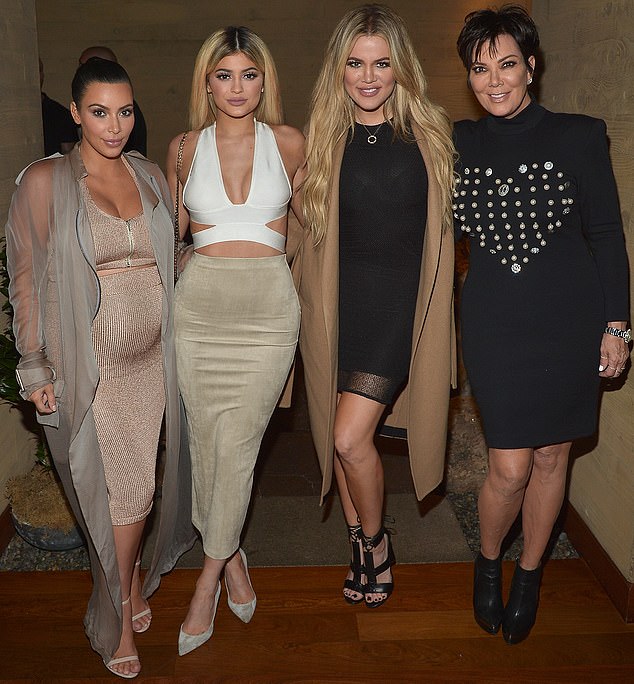 Defendants: Kim, Kylie, Khloe and Kris are pictured together at Kardashian hot spot Nobu Malibu in 2015 before Chyna entered their family life

Chyna had moaned on Twitter that she ‘had to give up’ three of her five cars because of ‘morals, beliefs, being a single mother, no support I’m MAMA.’

Her tweet quickly appeared on The Shade Room, where Rob and Tyga leaped into the comments to give their side of the story.

‘I pay 37K a year for my daughter’s school,’ Rob retorted. ‘I handle every single medical expense. I pay for all her extracurricular activities. I have my daughter from Tuesday-Saturday. Why would I pay child support lol’.

Tyga asserted: ‘I pay 40k a year for my son school & he lives w me mon- sat. Why would I pay child support lol’.

‘Why would I pay child support lol’: Her latest broadside comes after both Rob and Tyga struck back when she of not receiving child support from them

On the question of school fees, Tyga wrote to Rob: ‘how you pay 3k less. Let me kno the plug,’ with a crying laughing emoji.

In 2019 Rob succeeded in cutting his child support payments to Chyna from $20,000 a month to nothing, TMZ reported.

Rob and Chyna were together on and off through 2016, during which time they welcomed Dream and starred on their reality show.

After their explosive breakup, Chyna sued the Kardashian-Jenners, alleging they hurt her career and got her successful show canceled. 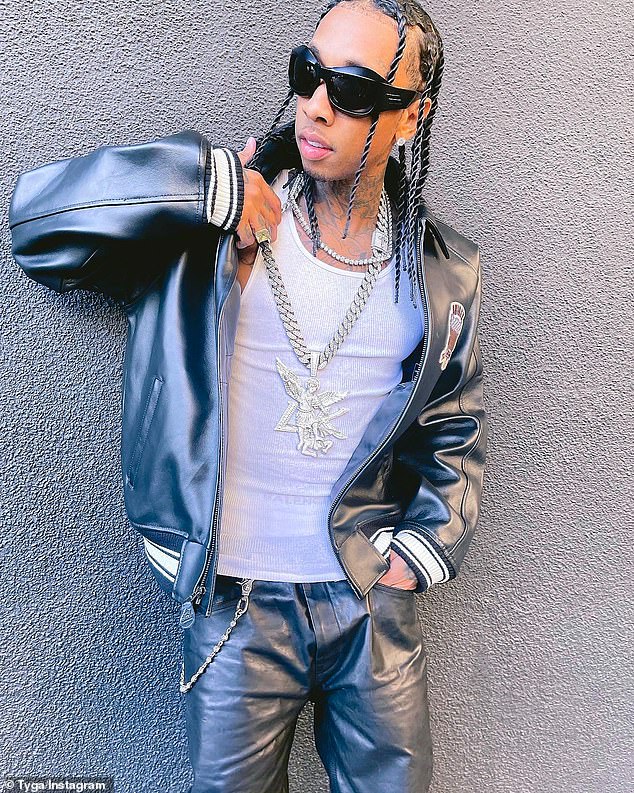 Rob sued Chyna in 2017 for assault and battery, alleging that she had tried to choke him with an iPhone charger cable in December 2016.

The case dragged on for years and included an allegation that Chyna attacked Rob with ‘a six-foot metal pole’ while under the influence of champagne and cocaine, according to court documents obtained by The Blast. 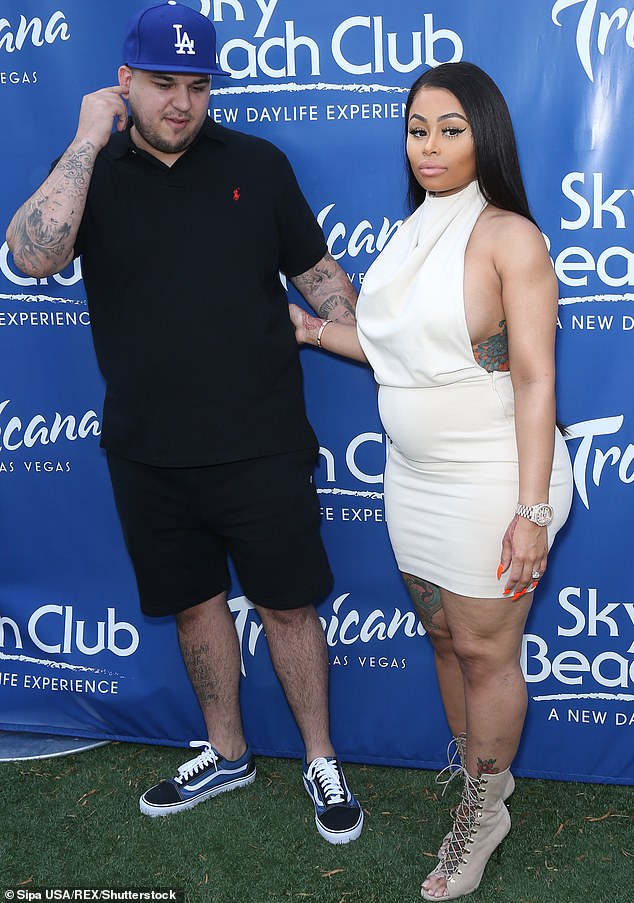 The way they were: Rob and Chyna were together on and off through 2016, during which time they welcomed Dream and starred on their hit reality show

However Rob announced this February that he was dropping the assault and battery lawsuit against Chyna out of concern for his daughter.

‘My love for Dream far outweighs my desire to proceed with my claims against her mother in a public trial,’ he said in a statement quoted by People.

‘Now that the court has ruled that there is sufficient evidence to warrant a jury trial on my claim for assault, for our daughter’s sake, I am dismissing the action and focusing on my co-parenting relationship with Chyna.’ 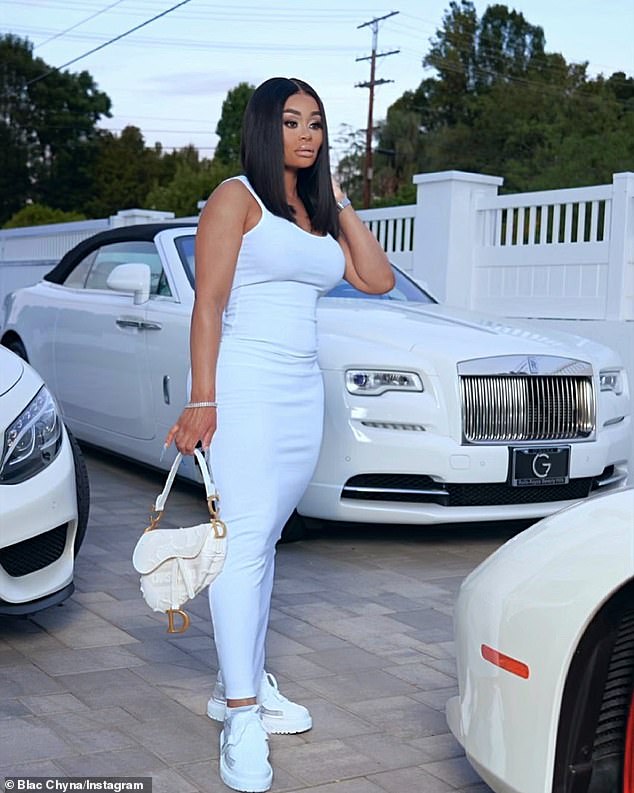 Legal battle: After their explosive breakup, Chyna sued the Kardashians, alleging they hurt her career and got her successful show axed

Chyna’s attorney Lynne Ciani released a statement insisting Rob’s assault and battery claim had been ‘malicious and baseless’ and was merely a part of the Kardashian-Jenner family’s plot to have Rob And Chyna canceled.

Lynne said she and Chyna would now ‘turn their full attention’ to the ‘defamation and intentional interference with contract’ suit against Kris, Kim, Khloe and Kylie.