Biden Will Celebrate Judge Jackson’s Confirmation at the White House 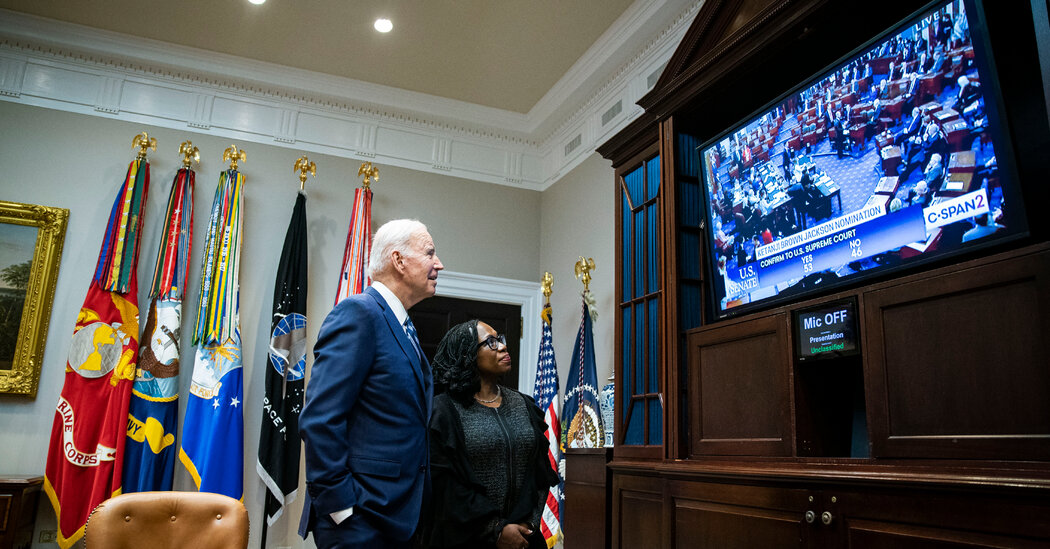 WASHINGTON – President Biden planned to celebrate the confirmation of Judge Ketanji Brown Jackson to the Supreme Court with a ceremony at the White House South Lawn on Friday. The event was to commemorate the appointment of the first Black woman to the court alongside a bipartisan group of senators who had voted to confirm her.

White House officials said on Friday that they had invited Judge Jackson’s family, all current and former Supreme Court justices and three Republicans – Senators Susan Collins of Maine, Lisa Murkowski of Alaska and Mitt Romney of Utah – who had voted with Democrats on Thursday to confirm Judge Jackson, lending a modicum of bipartisanship to an otherwise bitterly polarized process.

A spate of positive coronavirus cases among lawmakers and administration officials this week whittled down the prospective guest list. Ms. Collins said on Thursday that she had tested positive, as did several Democrats who had been near Mr. Biden in recent days, including Speaker Nancy Pelosi. The president was last tested on Wednesday evening, a White House official said on Friday morning, hours before the ceremony.

Judge Jackson’s confirmation is a major victory for Mr. Biden, who once revived his flagging presidential campaign by pledging to nominate a Black woman to the Supreme Court if elected. He and his advisers were intent on celebrating a promise fulfilled.

“She began her prep work immediately, starting the day after she was announced, and promised to meet with anyone who wanted to and honored it, meeting with 97 senators over the course of her consultations,” Ms. Psaki said.

At the White House on Thursday, Mr. Biden and Judge Jackson watched the vote together from the Roosevelt Room. The White House shared video from the president’s Instagram account of the moment when the two watched Vice President Kamala Harris declare the 53-to-47 vote in favor of the judge’s confirmation.

“All right!” Mr. Biden exclaimed, pumping his fist and wrapping his other arm around Judge Jackson, who clasped her hands and smiled. “OK.”

The president then took a selfie with the judge in front of a television screen displaying the final vote count. Ms. Psaki said on Thursday that reporters were not allowed into the room because the moment was a private one, and the South Lawn party was for a wider audience.

Judge Jackson will not be sworn in for months. Justice Stephen G. Breyer, whom she will replace on the bench, has said he plans to retire this summer, at the end of the current term.

Judge Jackson was born in Washington, DC, and grew up in Miami. She graduated from Harvard College and Harvard Law School, Justice Breyer’s alma mater, and went on to clerk for him during the 1999-2000 Supreme Court term.

While her confirmation does not change the court’s ideological balance – conservatives appointed by Republicans retain their 6-3 majority – it achieved another first: All three justices appointed by Democratic presidents will be women.