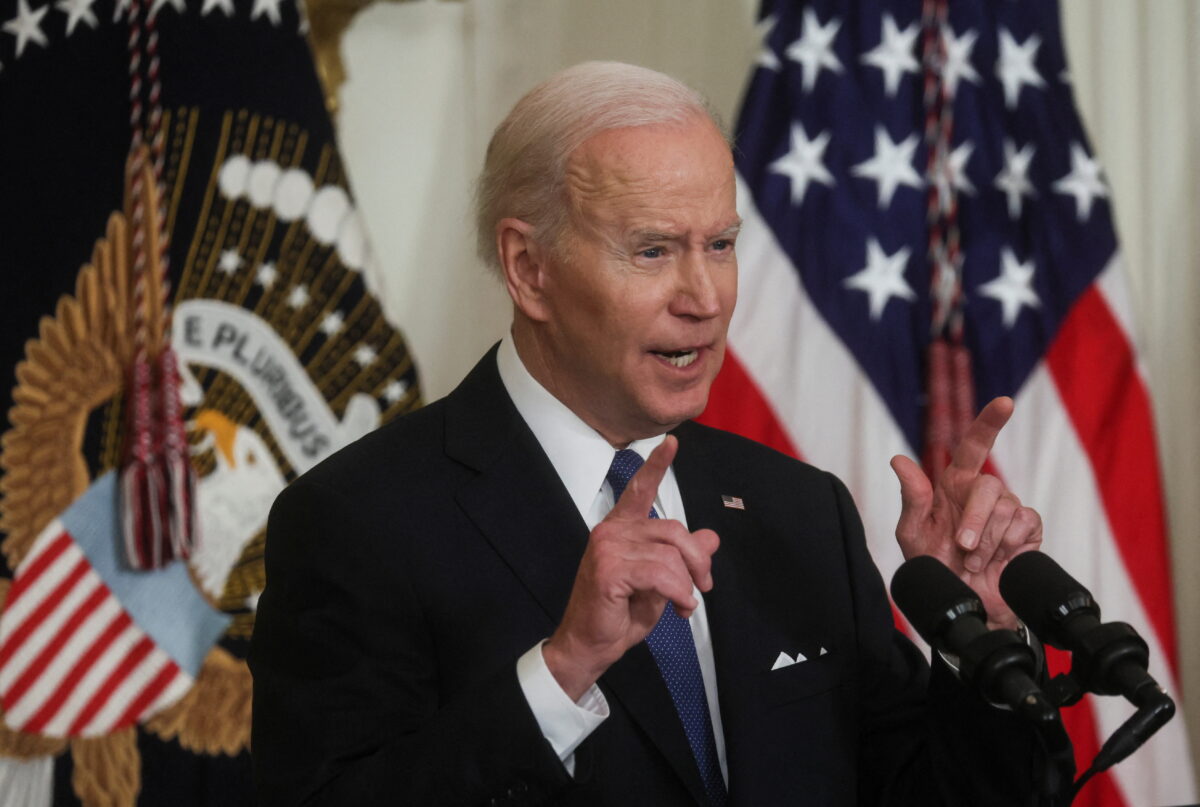 President Joe Biden during a conference on Judge Ketanji Brown Jackson’s successful nomination to the Supreme Court thanked the three Republican senators who all but guaranteed her confirmation.

After weeks of scrutiny and debate on her qualifications to serve on the nation’s highest court, the Senate on April 7 voted 53–47 to approve her confirmation, putting her on track to be the nation’s first black female justice after Justice Stephen Breyer steps down at the end of the court’s current term.

All 50 Democrats voted in favor of the nominee and were joined by three Republicans: Sens. Susan Collins (R-Maine), Mitt Romney (R-Utah), and Lisa Murkowski (R-Alaska). The 47 other Republicans in the upper chamber opposed her confirmation.

Biden presented the successful confirmation vote as a historic achievement that will “[bend] the moral arc of the universe… a little more toward justice. ”

“Yesterday — this is not just a sunny day,” Biden said in his opening remarks. “I mean this from the bottom of my heart: This is going to let so much shine — sun shine on so many young women. So many young black men.

“When I made the commitment to nominate a black woman to the Supreme Court, I could see this day. I literally could see this day because I thought about it for a long, long time. As Jill [Biden] will tell you, I was not going to run again. But when I decided to run, this was one of the first decisions I made.

“I could see it, I could see it as a day a hope, a day a promise a day of progress. A day when once again the moral arc of the universe, as [President Barack Obama] used to quote all the time, bends a little more toward justice. ”

Later, Biden turned his attention to the three Republicans who voted for Jackson.

“I always believed that a bipartisan vote was possible,” Biden said.

“I hope I do not get them in trouble,” Biden joked.

“Senator Collins is a woman of integrity,” Biden said. “Senator Murkowski is the same way in Alaska and up for reelection.”

All three of the GOP senators, Biden continued, “deserve enormous credit for setting aside partisanship and making a carefully considered judgment based on the judge’s character qualifications, independence. And I truly admire the respect, diligence, and hard work they demonstrated in the course of the process. ”

The three GOP defections came as no surprise, as each of the three had already announced their intention to support her.

On March 30, Sen. Collins became the first GOP lawmaker to announce that she would support Jackson’s nomination.

“I have decided to support the confirmation of Judge Jackson to be a member of the Supreme Court,” she told The New York Times. “In recent years, senators on both sides of the aisle have gotten away from what I perceive to be the appropriate process for evaluating judicial nominees.

“In my view, the role under the Constitution assigned to the Senate is to look at the credentials, experience, and qualifications of the nominee. It is not to assess whether a nominee reflects the individual ideology of a senator or would vote exactly as an individual senator would want.

“There can be no question that she is qualified to be a Supreme Court justice.”

Collins was joined in quick succession by Murkowski and Romney, who have long been willing to vote against their party.

“After reviewing Judge Jackson’s record and testimony, I have concluded that she is a well-qualified jurist and a person of honor,” Romney said in a tweet. “While I do not expect to agree with every decision she may make on the Court, I believe that she more than meets the standard of excellence and integrity. I congratulate Judge Jackson on her expected confirmation and look forward to her continued service to our nation. ”

Murkowski explained her own defection in a statement: “My support remains on Judge Jackson’s qualifications, which no one questions; her demonstrated judicial independence; her demeanor and temperament; and the important perspective she would bring to court as a replacement for Justice Breyer. ”

The support of the trio all but guaranteed that Jackson’s confirmation would overcome the 51-vote filibuster threshold.

Other Republicans cited concerns that Jackson is soft on crime, and argued that her judicial philosophy, and how she would vote if sent to the Supreme Court, was too unclear for them to support her.

On March 28, Republicans in the Judiciary Committee made a last-ditch effort to slow Jackson’s confirmation by demanding a one-week hold on the committee vote, citing gaps in Jackson’s record. However, they were not able to hold off the vote indefinitely under Senate rules.

Despite some GOP hopes that swing-voting Sens. Joe Manchin (DW. Va.) And Kyrsten Sinema (D-Ariz.), The duo ultimately joined the rest of their party on April 7 in supporting her confirmation.