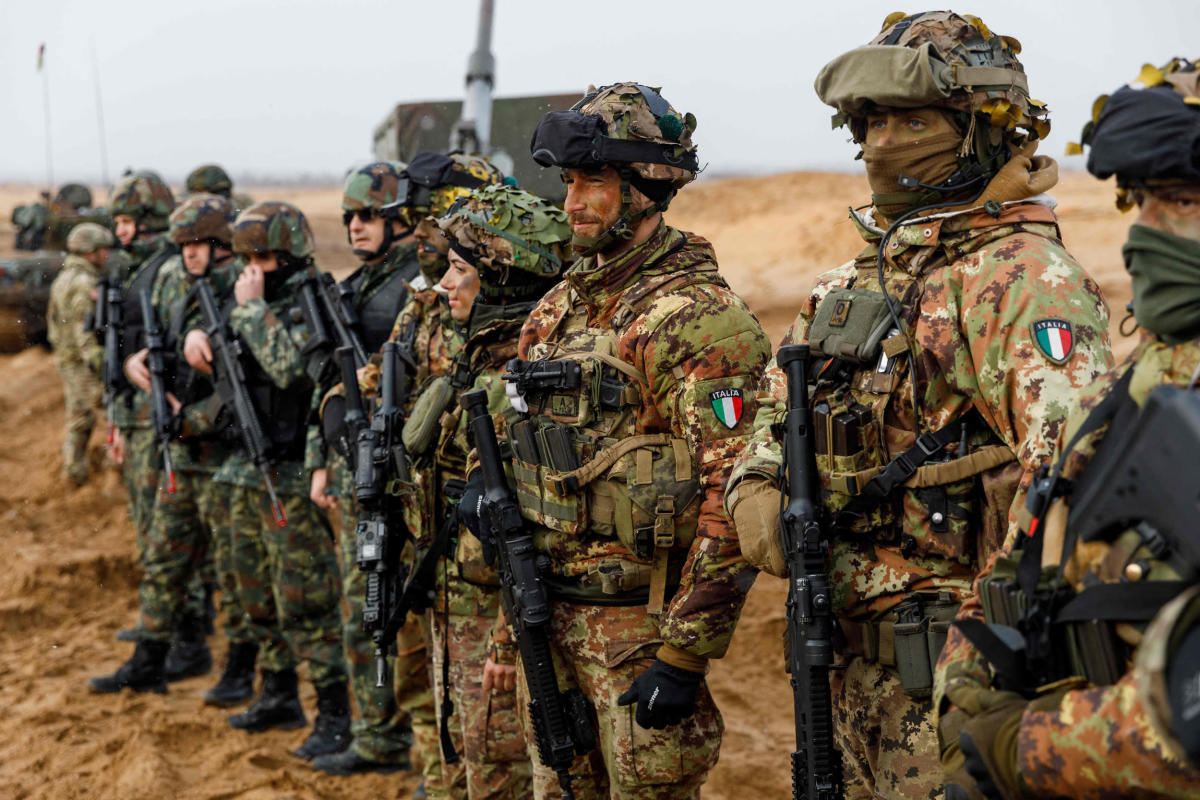 TALLINN, Estonia — Each new bomb and missile that strikes Ukraine casts a long shadow across this country and the other Baltic states that share a border with Russia.

Unlike Ukraine, however, these states — Estonia, Latvia and Lithuania — are members of NATO and are close allies of the United States. For years, they have raised the alarm that Russia is their most existential threat. Yet, they feel they received little response prior to the invasion of Ukraine.

Now, unless they get further support from their allies, some worry they could be the next target of the Kremlin and the very bombs and missiles that it has used to level Ukrainian cities.

Estonian Foreign Affairs Minister Eva-Maria Liimets told NBC News on Tuesday that Russia is not a direct threat at the moment, but her nation’s defense and its future as a liberal democracy depend on the clear support of its allies, especially Washington.

“It’s very important to see US military presence in Europe, and we would also welcome US troops here in Estonia, in addition to the other allied presence we have at the moment: troops from the United Kingdom, from France, from Denmark,” she said, later sharing her hopes that the addition of NATO’s battle groups would be a permanent fixture of Estonia’s defense.

The Department of State and the National Security Council did not respond to requests for comment.

Liimets, who has served in her role since January 2021, focused that Estonia and the US maintain “very good relations,” noting her visit to Washington in February and Secretary of State Antony Blinken’s stop in Estonia in March.

Still, she said, more could be done to make that support concrete.

“From our perspective, of course, it would be very important to also see a new US ambassador here in Estonia,” she said. The post has sat empty since James Melville Jr., the most recent US ambassador to Estonia, resigned in protest in 2018 over then-President Donald Trump’s comments about the European Union and NATO.

This year is the 18th anniversary of Estonia’s membership in NATO, and the 100th year of diplomatic relations with the US But most remarkably for Estonians, the first shells fell in Ukraine on Feb. 24 — the day they celebrate their independence from the occupation of the then-Soviet Union.

Baltic states’ officials and lawmakers see Ukraine’s struggle and its future as intertwined with their own security and the fate of their liberal democracies. Russia’s latest acts of aggression, they say, are affirmation that the Kremlin remains their greatest threat, despite close allies telling them for years that they were alarmist.

Here in Estonia’s capital city, which boasts a history that stretches back to the 13th century, newly built skyscrapers of glass and steel are lit up at night with the blue and yellow of Ukraine. In the old town sector — made up of towering ancient churches and castle walls — shops and restaurants display small Ukrainian flags and collection tins for Ukrainian refugees. At the Russian Embassy, ​​the building’s entrance is protected by police barriers plastered with anti-war signs. There is often the sound of ripping duct tape as more protest posters are affixed to the fence.

“This war is very worrisome and our society really feels it because we have accepted more than 24,000 refugees from Ukraine,” Liimets said. “This is a big number of refugees. Bear in mind that Estonia is a small nation of 1.3 million people.”

With Russia waging war in Ukraine, Baltic leaders say there needs to be enough NATO-backed defenses in their countries to convince the Kremlin that the cost of any attack would be too high.

After a summit of world leaders in Brussels last week, NATO sent four battle groups to Bulgaria, Hungary, Romania and Slovakia. They did not come to any agreements on the defense of Latvia, Lithuania and Estonia. To further support the region, though, about 2,700 US troops are already stretched unevenly across the Baltic states, and thousands of NATO troops have been deployed to further reinforce the region’s protections.

“We welcome these reinforcements, but it’s not enough — absolutely not enough,” said Rihards Kols, the chair of the foreign affairs committee in the Latvian Parliament. “Unfortunately at the Brussels summit, there weren’t concrete decisions put on the table to not only strengthen the eastern flank, but also support the Baltic states’ defensive posture altogether.”

Kols and other leaders said that they must now prepare to make their case at NATO’s June summit in Madrid, where the alliance will work to define its security threats and how to address them politically and militarily.

But many stressed that Russia’s acts of aggression are happening now and, as Kols said, “I don’t think time is an ally.”

This fear has heightened in recent days and weeks and many how immense a threat Russia is believed to be for their democracies.

In a 75-page booklet published by the Estonian Foreign Intelligence Service shortly before the war in Ukraine, titled “International Security and Estonia 2022,” 60 pages are dedicated to the dangers posed by Russia and Belarus. The Baltic leaders also regularly recall the history of Soviet occupation, which lasted longer than many in the West realize — Russian troops did not leave Estonia until 1994, three years after the Soviet Union dissolved.

“For us, it is very important that we can continue this democratic path, which our people have chosen, and we have to protect our country, our territory, so that our people can live in peace,” Liimets said.

“We have seen that Russia is aggressive against its neighbors,” she added. “We saw it in 2008 in Georgia, in 2014 in Ukraine, and now again in Ukraine.”

Russia’s threat felt across the region

That feeling is shared across the Baltic region. While Lithuania, Latvia and Estonia have their own cultures and languages, the three have long warned of the threat emanating from the Kremlin, and remained steadfast in their view of Russia as their largest threat.

“Unfortunately, up until Feb. 24, we’ve been labeled in the West as alarmist,” Kols said of the Baltic states. “But we are past the point of ‘I told you so.’ What we are saying now is, ‘Thank you [NATO] for that we were right, but do listen to us now.’”

These three small countries have since further unified their messages: Their parliaments’ foreign affairs committee chairs testified together before US Congress about Russia’s threat earlier this month and, despite the dangers, the heads of those parliaments met with Ukrainian President Volodymyr Zelenskyy in Kyiv last week .

The three countries have also announced that they will increase defense spending to 2.5 percent or more of their gross domestic product, beyond the 2 percent goal that NATO has set for its members. For Estonia, that’s hundreds of millions of dollars in additional spending.

Those boosts to defense spending are here to stay, said Kristjan Mäe, who leads the NATO and European Union department at Estonia’s defense ministry. Even leaders from opposition parties support the expanded military funding.

“This war in Ukraine and Russia’s aggressive rhetoric is very convincing to everyone in our own society that we need to spend more on security in order to have the freedoms that we have here,” he said, noting that they increased the funding despite the negative economic effects of the pandemic the country has faced. “We are going to defend those freedoms alone and together with our allies.”

Mäe said that Estonia will increase its spending on Javelin missiles, which have proven to be particularly effective against Russian tanks in Ukraine. He said the country is also ensuring that its stores of munitions are well stocked and that its conscripts are well trained. The country has also stated its plans to develop its naval and armored warfare abilities, as well.

However, some Baltic leaders said that those additions to their defense, and NATO’s temporary troop deployments, still fall short of pushing back against the Kremlin effectively.

Lithuanian President Gitanas Nauseda said earlier this week at an Atlantic Council panel, which included the presidents of Estonia and Latvia, that his country remains “vulnerable.”

Even at this juncture, he said that items like “selective no-fly zones” shouldn’t be off the table. To Russia, he said, it should be clear that “all options are open.”

Until NATO makes further choices regarding its defenses here, Baltic leaders are using the war in Ukraine to learn lessons about Russia’s military strategy and ability. Not many are impressed by Russia’s display of land forces beyond the sheer number of the troops it has dedicated to the invasion. Their concern is focused on those bombs and missiles, which Russia has leaned on more heavily as the war has continued.

Estonia intends to develop its air defense, but that can’t happen overnight. That’s why some here hope NATO allies would fill the current vacuum — such as when the US provided Poland two Patriot surface-to-air missile batteries earlier this month.

“Midrange air defenses are difficult, you don’t develop that capability … in a year or two — you just can’t do that,” Mäe said. “But we see that it’s still very necessary to not only defend our troops, but also our cities from Russia’s attacks.”

And since it could take until 2025 to have those air defenses fully in place without further support, Estonia must for now rely on its alliance with NATO countries, particularly the US, to maintain its assurances.

As for that, Melville, the last Estonian ambassador, said that he shared Liimets’ view that the Biden administration needs to appoint someone to his old post as soon as possible. Its absence sends the wrong signals to the Kremlin and the Estonians, he said over the phone from a grocery store parking lot in North Carolina.

“What does that say to the Estonians?” he asked. “’We’ll get to you eventually?’ It’s just terrible, especially now.”