“It was getting a little wiggy.”

Ask Krista Allen about the biggest challenge she faced during her first few days as The Bold and the Beautiful‘s new Taylor, and she’ll tell you it was not learning the lines or remembering where to stand. “It was the damn wig,” she says with a laugh.

“One of the most important things to me is building a character,” she explains. “Hair, makeup and wardrobe are so important when it comes to helping the audience know who that person is. And with the wig, there were so many times that somebody would be talking to me and, knowing I was not on camera, I’d adjust the wig because I could feel it slipping! ”

Bottom pic is today!
The other is closer to where it will be when it airs next week.
Super dark (the blonde grabbed the dye so hard!)
But we’re getting it back to my actual hair color day by day! ❤️ pic.twitter.com/C8PqTiQcnJ

Watch carefully, she says, “and you’ll see that sometimes, when someone is hugging Taylor, I’ll put my hand on the back of my head because the wig would get caught on their shirt.”

At last, however, the wig is gone! On the episode which aired Wednesday, February 3, Ridge caught a glimpse of his ex’s new, shorter do… and Allen’s own hair made its debut. “It was getting so long, it seemed a little wiggy,” Taylor explained. 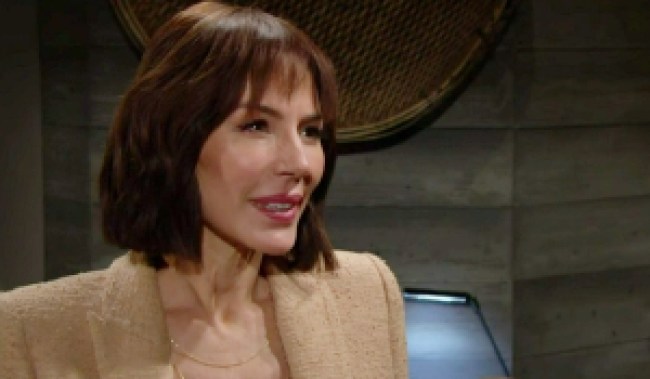 Above: Like Ridge, we totally dug Taylor’s new look!

Thankfully, this means that Allen can move past what she jokingly called a severe case of PTWD, or post-traumatic wig debacle. One unexpected side benefit to the hairy situation? The actresses’ humorous way of addressing the situation on social media earned her many new fans.

“It was so credibly obvious, I sort of had to step up and say ‘Yeah, it’s pretty bad,'” she says. “It was not like I could say, ‘What do you mean? I think it looks so natural! ‘”

While her own hair has made its debut, expect a few more changes in the days ahead. Describing the current look as an “awkwardly growing out bob,” she told Twitter followers, “Give me one more month and it’ll be rockin ‘!”

Now that Wig Gate is over and we can all breath a sigh of relief, check out the gallery below in which we look at some of the transformations undergone by other stars. From new ‘dos ​​to going gray, these daytimers prove that looking good never goes out of style!