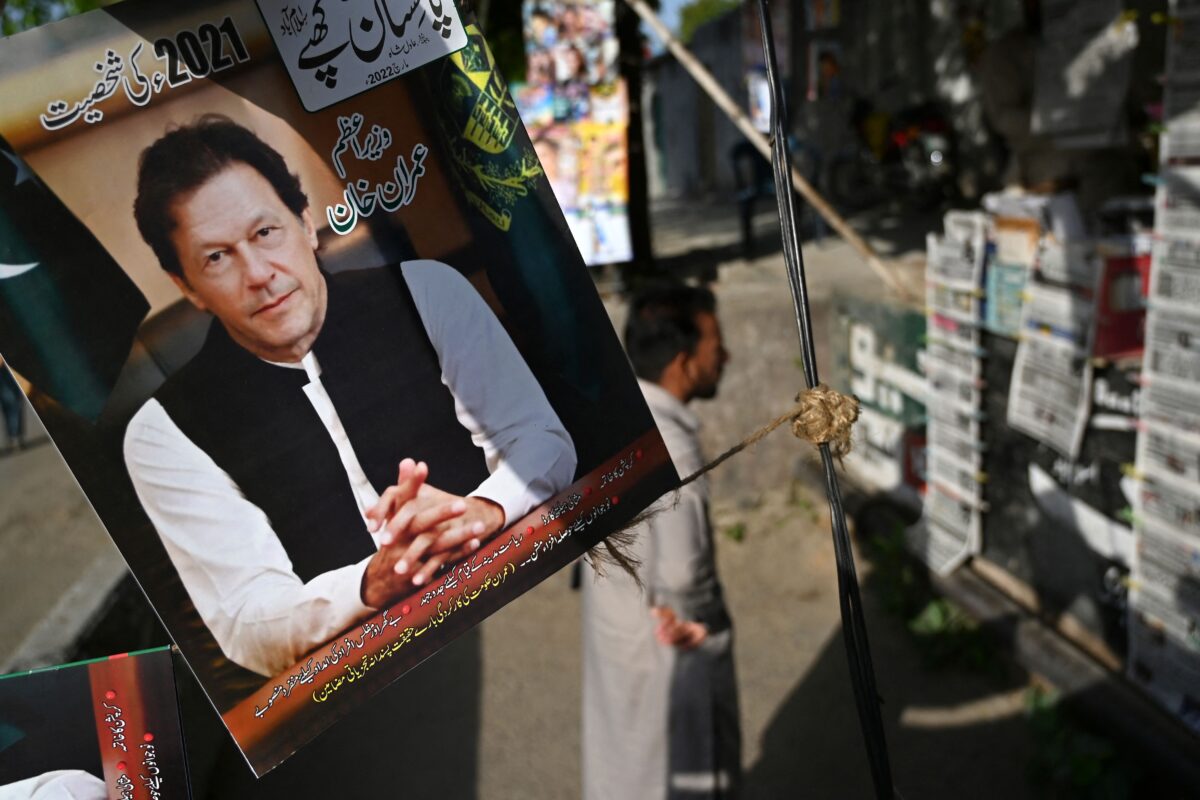 Pakistan is facing political turmoil after Prime Minister Imran Khan canceled a no-confidence vote in the country’s parliament that he was expected to lose, and dissolved the legislature on April 2 to enable new elections to be held. Meanwhile, during this maelstrom, he also accused the United States of conspiring to oust him.

However, to Khan’s disappointment, Pakistan’s Supreme Court declared the dissolution of the parliament unconstitutional on April 7 and ordered a no-confidence vote against the prime minister to be held on April 9.

Even before the court’s ruling, things had already become complicated geopolitically as after Khan’s accusations against Washington, various US adversaries had started supporting Khan’s claims openly or discreetly.

While the Russians and Iranians officially and blatantly supported Khan and accused the United States of “shameless interference,” Beijing was officially silent but Chinese-state media has floated theories that Washington, wary of the Chinese regime’s close ties with Khan’s government, is behind the constitutional crisis in the country.

Asian and American analysts told The Epoch Times that the Chinese regime is keeping a close watch on the situation because it’s deeply involved in domestic politics as well as the running of the military affairs in Pakistan.

“The Chinese are in a fix,” Ahmed Quraishi, a Pakistani journalist who covers national security and human rights from the capital Islamabad told The Epoch Times.

“They want to exploit Khan’s statements against the US but China has its own silent problem with Khan, who slowed down Chinese projects in Pakistan over suspicion that Sharifs have links to these projects,” said Quraishi.

Quraishi was referring to the family of former Pakistan Prime Minister Nawaz Sharif. His brother Shehbaz Sharif is the leader of the main opposition party in the country, Pakistan Muslim League (Nawaz) (PMP-N), and will likely take over the government if Khan loses the vote. Nawaz Sharif’s daughter Maryam Nawaz Sharif is another leader of the PMP-N.

Sharif, the longest-serving Prime Minister of Pakistan was removed from office by the Supreme Court in 2017 in relation to revelations against him leaked in the Panama Papers. The court also sentenced him to a decade in prison. He’s currently in London for medical treatment on an expired bail.

When the political crisis emerged in the last week of March, Beijing had said that it “sincerely hopes that all parties in Pakistan will remain united and uphold the major interest of development and stability.”

When asked if Beijing is concerned with instability in Pakistan, China’s Foreign Ministry spokesperson Wang Wenbin said on March 31, “China is committed to a non-interference policy.”

After Khan dissolved parliament, Nawaz Sharif accused him of conspiracy and treason against the country. “Today, a man obsessed with power trampled the Constitution,” Sharif said in a message on Twitter.

Meanwhile, in his persistent attack on the opposition, Khan had said that if Shehbaz Sharif takes over the government, “they will do slavery of America.” The Sharifs have also accused an activist from Khan’s party of attacking Nawaz in London during which Nawaz’s guard was reportedly injured.

All these tumulous events in Pakistan’s domestic politics have unfolded under the shadow of China’s investments in its flagship, multi-billion dollar Belt and Road Initiative project called the China Pakistan Economic Corridor (CPEC) that links China’s far western Xinjiang region with the southern coast of Pakistan.

“CPEC and Chinese projects started under Nawaz Sharif’s government, and under his younger brother Shahbaz Sharif in Punjab. They have developed very close ties to the Chinese leadership. Khan and his PTI [Khan’s political party] suspected corruption behind these ties, ”said Quraishi.

Khan had also organized street protests against the Sharif government in 2014 and this had forced Chinese Communist Party leader Xi Jinping to cancel an official visit to Pakistan. “This soured China-Khan ties,” said Quraishi.

The top court effectively discredited the theory that the US has a role when it dismissed this as a legitimate reason for [Prime Minister] Khan’s decision to cancel the vote, ”said Quraishi.

Aparna Pande, director of the Washington-based think tank Hudson Institute’s Initiative on the Future of India and South Asia, told The Epoch Times, “Things are what they are in Pakistan. Nothing much has changed. The military remains powerful and Khan is out. “

Pande, who wrote her doctoral dissertation on Pakistan’s foreign policy, said that Chinese stakes and influence in Pakistan remain because their ties are to Pakistan’s military and not to civilians, and the military remains the key force in the country.

Amid the political turmoil, the Chinese regime’s People’s Liberation Army (PLA) hailed the military-to-military relationship between the two countries. The spokesperson of the Ministry of Defense PLA Senior Colonel Wu Qian said on March 31 that the two sides’ military relations remain the key “mainstay of the China-Pakistan friendship, have played an important role in the development of bilateral relations for a long time ”.

Pande said that one-quarter of Pakistan’s external public debt is owed to China and the two countries have close military and intelligence ties.

Earlier on March 29, after presiding over a meeting of the government’s National Security Committee, Khan in nearly an hour-long live address to the nation accused the United States of conspiring to oust him. He shared more details on April 3 and was quoted as saying that the US Assistant Secretary of State for South and Central Asian Affairs Donald Lu told Pakistan’s Ambassador to the United States Asad Majeed that there could be implications if Khan survived a no-confidence vote in the assembly.

The United States has denied these claims, with State Department spokesman Ned Price saying there was “no truth” to Khan’s allegations.

Despite the supreme court’s ruling which has dispelled Khan’s allegations against Washington, the prime minister’s likely removal does not put an end to his influence in the country, experts said. He will still continue to lead the major opposition party in parliament and will continue to hold major sway in Pakistan’s domestic politics, aligning with other anti-American, jihadist forces. The damage, meanwhile, has already been done to the Pakistan-US relationship, they noted.

Pande said that China must have been very pleased “just as Moscow” at the foreign conspiracy allegations leveled by Khan against the United States.

“From China’s point of view, the less the US is involved inside Pakistan the more it will help China deepen its stranglehold on this country of 200 million which has nuclear weapons,” she said.

Venus Upadhayaya reports on wide range of issues. Her area of ​​expertise is in Indian and South Asian geopolitics. She has reported from the very volatile India-Pakistan border and has contributed to mainstream print media in India for about a decade. Community media, sustainable development, and leadership remain her key areas of interest.