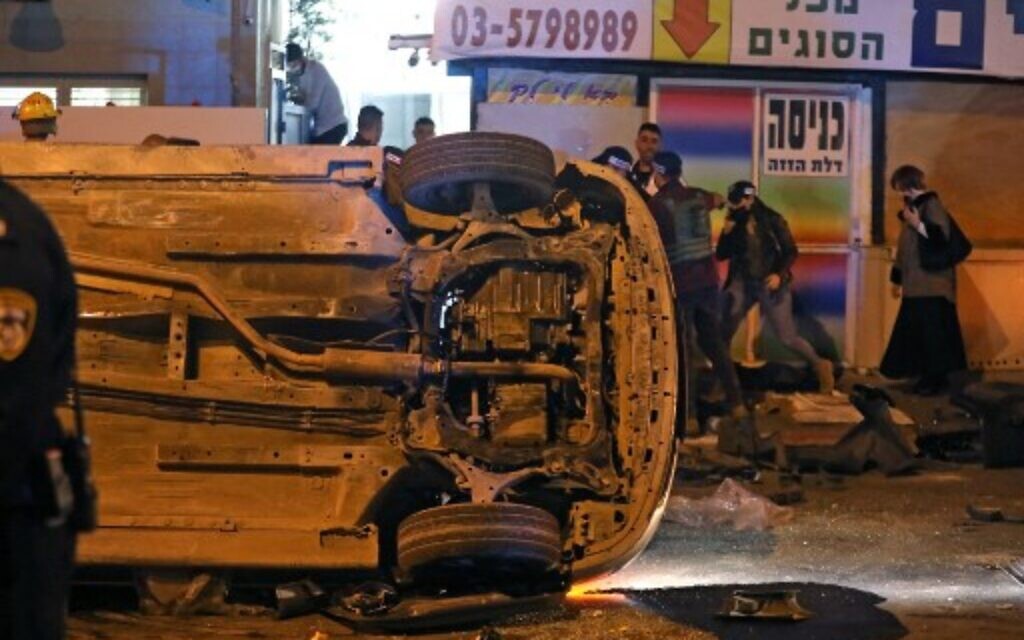 Police ordered officers onto heightened alert overnight Tuesday, the army said it would beef up troop presence along the West Bank’s border with Israel, and cities announced they would shut down construction sites in order to keep Palestinian laborers away, after the third terror attack in a week sent reverberations rippling outward.

In Bnei Brak, scene of Tuesday’s attack — in which a Palestinian gunman opened fire on passersby, killing five — angry locals gathered where the shooting took place, chanting anti-Arab slogans, overturning a vehicle, and surrounding Public Security Minister Omer Barlev, who needed to be spirited away by police.

The crowd, including several right-wing politicians, verbally harassed the minister and sought to get closer to him, but the police managed to keep them at a distance before pulling him from the area.

Despite their anger, Barlev vowed Israel would not be deterred in its fight against terror.

“It’s a difficult night for Israel. Our hearts break for the families of those murdered and injured in this terrible attack. We will continue to battle with all our might until the terror is subdued,” Barlev said at the scene.

“The State of Israel will stand strong in the face of this new wave of terror, as we did in the past. We will use all the means at our disposal and operate in all areas in order to bring back security and quiet,” he added. 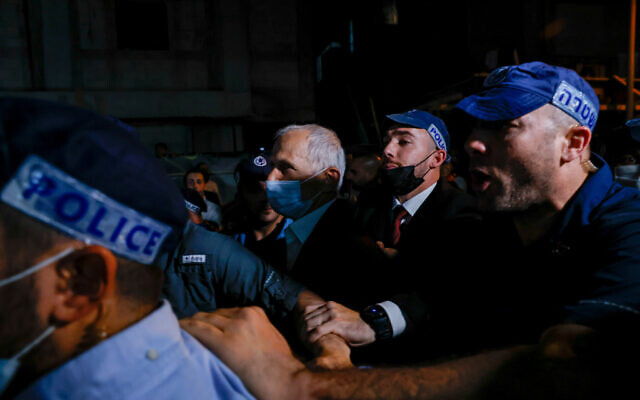 Minister of Public Security Omer Barlev seen at the scene of a terrorist attack in Bnei Brak, March 29, 2022. (Olivier Fitoussi/Flash90)

Barlev, whose ministry oversees the police, visited the scene of the shooting ahead of a security consultation with Prime Minister Naftali Bennett and senior defense officials following the attack.

Palestinian gunman Diaa Hamarsheh, 26, from the northern West Bank village of Yabed killed four people before he died in a shootout with a police officer, who was his fifth victim.

Media reports said there were celebrations outside his home and in other Palestinian cities after news of the attack broke. 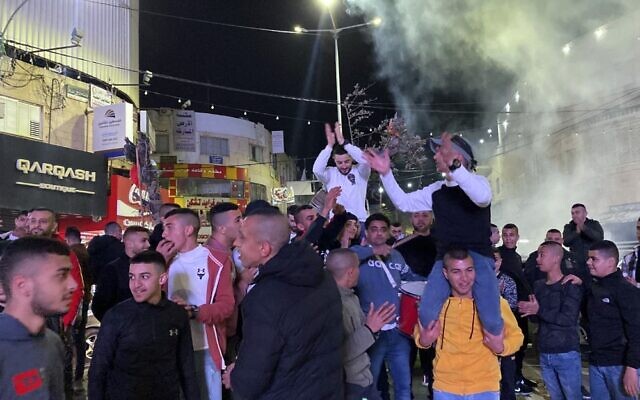 Palestinians celebrate in the West Bank city of Jenin after a shooting attack in the Israeli city of Bnei Brak, in which five people were killed, on March 29, 2022. (AFP)

Barlev’s comments echoed those of Defense Minister Benny Gantz, who said security forces will use “all means” to bring an end to the string of deadly attacks.

“We have been through difficult times as a people and as a country, amid waves of terror, and we have always won with determination and strength and so it will be this time as well,” Gantz said.

The IDF said it was bolstering troops in the West Bank and border areas with four additional battalions following the security meeting. Another four battalions were deployed to the region following a terror attack in Hadera on Sunday.

The security cabinet will convene on Wednesday afternoon to discuss the outbreak of violence.

It was not immediately clear how Hamarsheh entered Israel. 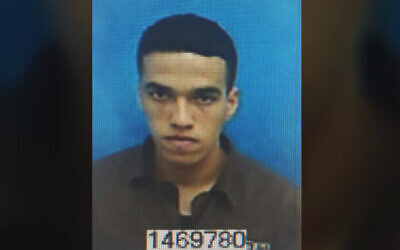 He previously served time in Israeli prison for membership in a terror group and weapons dealing.

Police were working to rule out the possibility that the shooter had any accomplices. Officers were scanning cars and entering some homes in Bnei Brak.

Eight illegal Palestinian residents were arrested. It was unclear whether any had a connection to the shooting.

Bnei Brak’s mayor ordered police to sweep and inspect construction sites in the city on Wednesday to search for more workers illegally staying in Israel. Many West Bank Palestinians illegally work in construction in Israel.

Schools in Bnei Brak were scheduled to operate as usual on Wednesday, but with an increased security presence. 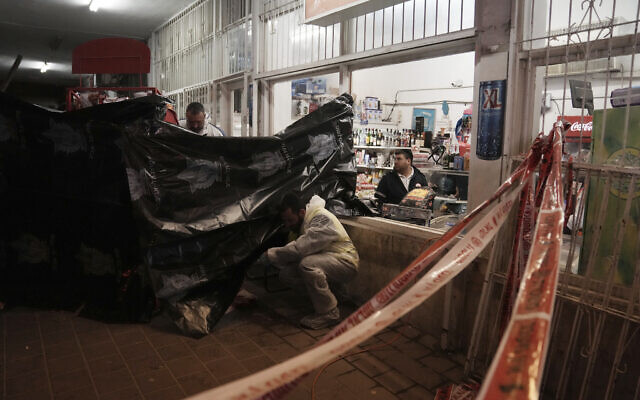 The mayors of Tel Aviv and Ramat Gan ordered additional officers to secure schools throughout their towns.

Several West Bank settlements also announced that they will not allow Palestinian workers to enter for construction jobs.

The gunman was killed by two police officers following the rampage, which saw him open fire on people walking out, riding bikes, or driving in their cars in the city east of Tel Aviv just before 8 pm,

The attack, the third deadly terror incident in a week, underlined concerns about an escalating wave of violence ahead of the Muslim holy month of Ramadan.

Four of the victims were declared dead at the scene, with the fifth — police officer Amir Khoury, 32, a Christian Arab — added to the fatalities after being hastened to the Beilinson Medical Center, officials said. 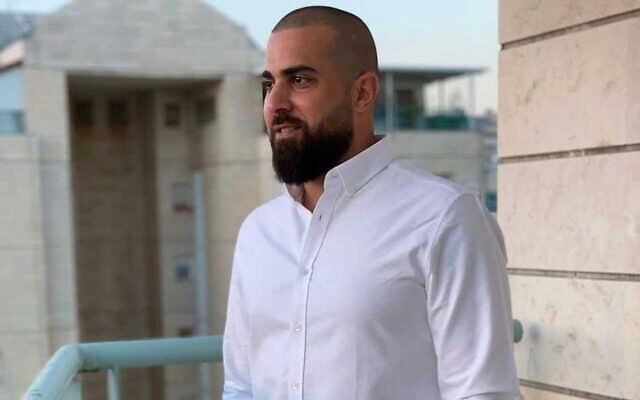 Amir Khouri, 32, from Nof Hagalil, a police officer who was killed in a firefight with a terrorist in Bnei Brak on March 29, 2022. (Israel Police)

Yehezkel is survived by his wife and a two-year-old son.

Reports said the two other victims were foreign workers who were not immediately named.

On Sunday, two police officers were killed in a shooting attack in Hadera. The Arab Israeli gunmen were affiliated with the Islamic State jihadist group.

Five days before then, four people were killed in a terror attack in the southern city of Beersheba. The terrorist — previously convicted of attempting to join IS — was shot dead by passersby. He was also an Israeli citizen.

Police had bolstered forces in areas where there was a perceived threat of violence, following the attack in Hadera. The IDF has also bolstered troops in the West Bank. 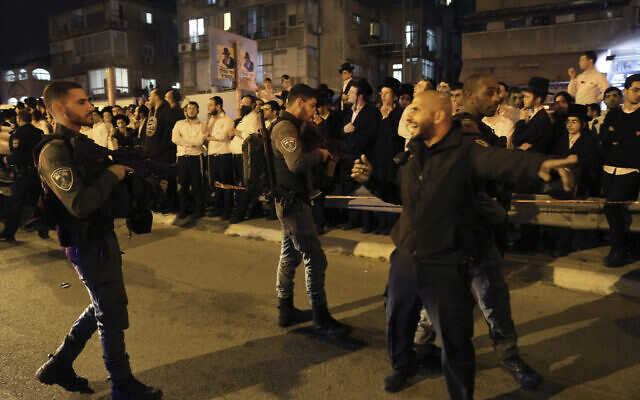