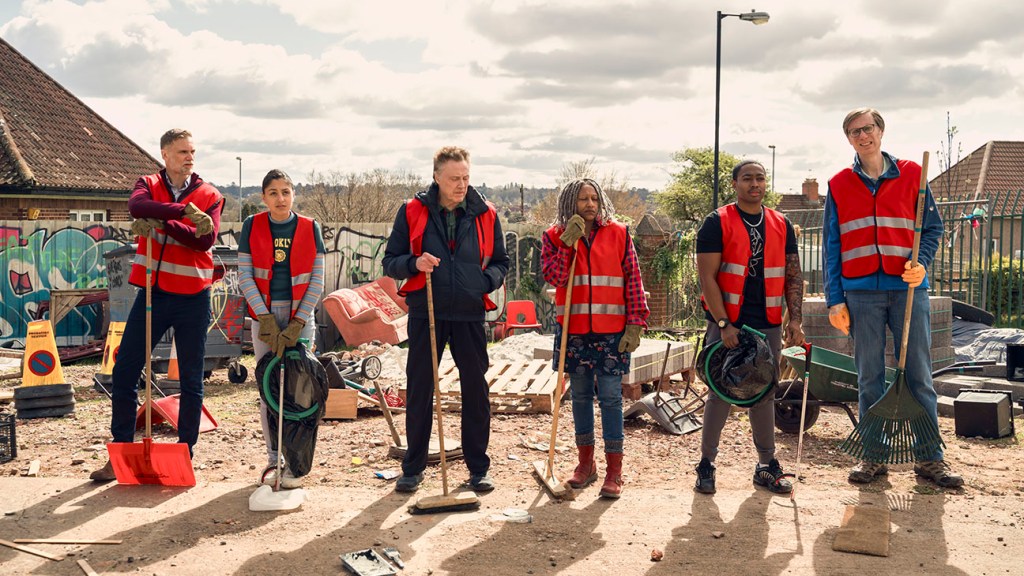 The Outlaws makes no bones about the fact that its leads fit into easily recognizable types. Indeed, it has one character — Rani (Rihanne Barreto), the self-described “studious Asian good girl” — just come out and say so in the first episode. “You’ve got your right-wing blowhard, your left-wing militant, celubutante, shifty old-timer and whatever the hell he is,” she explains to Christian (Gamba Cole), whom she playfully dubs the “bad boy.”

The aim of Stephen Merchant and Elgin James’ comedy-thriller series is to dig beyond these types, finding common ground among vastly different characters and building bridges between them that transcend the usual divisions of class or politics or social status. And while its results on that front are mixed at best, a likable cast and genial sense of humor nevertheless make for a generally pleasant time.

Clearly flawed, but likable enough that you might not mind.


Initially, its central gang of strangers are tossed together by semi-random circumstance. Each has recently found themselves in legal trouble for one unrelated matter or another, and each has consequently been assigned community service — 100+ hours of cleaning up a derelict building under the watchful eye of Diane (Jessica Gunning, giving off a vibe that’s somewhere between Melissa McCarthy and Dwight Schrute). But a series of events involving a handgun and a duffel bag stuffed with cash significantly up the stakes, binding the outlaws together more closely than they ever could’ve imagined at the start.

It’s an appealing premise for a series, especially if you’re a sucker for shows about misfits forming unlikely friendships. (Up to and including Misfitsto which The Outlaws bears a superficial but obvious resemblance.) The series is at its most enjoyable when its relationships are at their most endearing, like when the characters are dancing on the job to Sam Cooke’s “Chain Gang” or scheming to get one over on Diane like they ‘re in some much less glamorous version of Ocean’s 11,

But even with six hourlong episodes to fill, the series seems able to dig only so far into its seven core characters, to say nothing of the family, friends and coworkers surrounding each one. Its attempts to flesh out familiar tropes too often rely on still more familiar tropes. Obviously, the influencer (Eleanor Tomlinson’s effervescent hotheaded Lady Gabby) craves attention because she wasn’t loved enough by her rich dad (Richard E. Grant). Of course the aging con artist (Christopher Walken’s appealingly Christopher Walken-y Frank) is trying to repair a relationship with the daughter (Dolly Wells) he’s disappointed too many times before.

Some never stop feeling like stereotypes at all. Clare Perkins brings sensitivity and self-awareness to her role as acid-tongued activist Myrna — and yet the character, as written, feels like little more than a strawman. She’s a Daily Mail reader’s idea of ​​the kind of too-woke social justice warrior who’ll decry others as “race traitors” or “puppets of capitalism” for daring to like Michael Bolton or work part-time at Ikea, respectively.

Predictably, Myrna is most frequently paired in scenes with a self-admitted Daily Mail fan, cranky conservative John (Darren Boyd), so that other characters can crow that they’re “just two angry peas in a pod.” Their dynamic feels like one rooted not in mutual interest or feeling between the characters, but in Merchant and Elgin’s desire to make some facile point about how both sides of the political spectrum can be unreasonable and unyielding. The show’s other stabs at cultural commentary don’t run much deeper.

If the narrative of The Outlaws can feel too tidy — to the point of making Bristol, a city of over 400,000 people, seem as insular as a small town — its tone tends toward messiness. Perhaps there’s simply no way to jam together a potentially deadly criminal threat and a lighthearted subplot about a teenager’s house party into a single episode without some emotional whiplash. But it doesn’t make the experience of trying to go from one to the other feel any more organic.

Still, when The Outlaws works, it works. Rani and Christian’s flirtation treads a very well-worn young-romance path, complete with disapproving parents, nighttime sneak-outs and a speech about how a sheltered girl like her just can’t understand his real-world problems. But when they’re swaying to Khalid or posing in a party photo booth, Barreto and Cole beam at each other with such sweet, pure affection that it makes those plot points feel fresh again.

Likewise, it’s hardly a shock to learn that Gabby feels desperately lonely despite her 1.2 million followers (Jesus, she sweetly notes, only had 12), or that she has a habit of filling the loneliness with champagne and cocaine. But it’s touching nonetheless to see her develop an unexpected friendship with Greg (Merchant), an incompetent lawyer who has no friends — probably because he’s prone to introducing himself with groanworthy lines like “I’m six foot seven inches tall, and no, it’s not in proportion. If it was in proportion, I’d be eight foot three.”

In relationships like those, or in the ensemble’s gradual evolution from a mutually suspicious cohort of strangers to a coherent group of friends, The Outlaws feels like more than the sum of its parts. The characters may not feel as fully considered as they should be, and the points the series is trying to make with them too pat; one hopes that the already-announced season two will do a better job of actually subverting the well-established stereotypes it lays out.

But the series is nothing if not a plea to be forgiving of flaws — and the affection it shows for its characters, as well as the affection the characters eventually start showing each other, is just winning enough to make you want to comply.