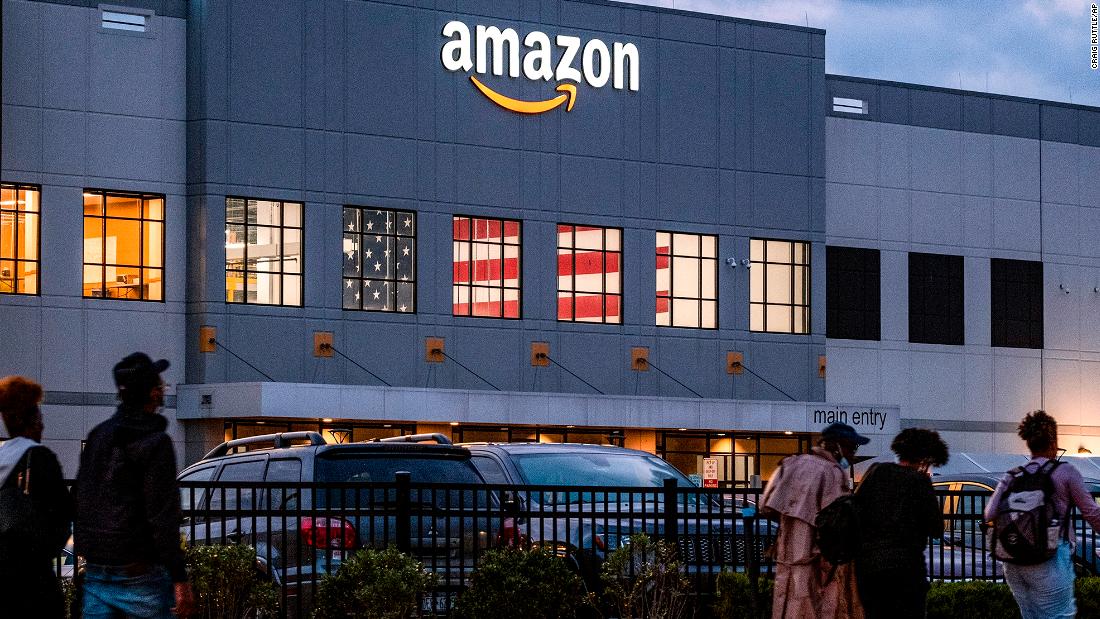 In its filing to the National Labor Relations Board, Amazon ,AMZN, alleges how the independent federal agency’s regional office which oversaw the election at its Staten Island facility, known as JFK8, “unfairly and inappropriately facilitated the [Amazon Labor Union’s] victory.”

It claims the agency used an “artificially reduced number” of employees in the voting unit to calculate whether the ALU had garnered enough support to even hold an election. It also claims the agency delayed investigating what it calls “frivolous” unfair labor practice charges that it says were “exploited” by the union. And it alleges that the agency failed to properly staff the polls during the election, which ultimately “produced chaos and hours-long lines to vote on the first polling day, discouraging other employees from voting.”

Amazon also outlines alleged misconduct on the part of ALU, the grassroots labor organization started by current and former employees of the facility. Among its claims about the ALU, it says the union unlawfully intimidated employees and “threatened violence against its detractors.”

Amazon spokesperson Kelly Nantel said in a statement Friday: “Based on the evidence we’ve seen so far, as set out in our objections, we believe that the actions of the NLRB and the ALU improperly suppressed and influenced the vote, and we think the election should be conducted again so that a fair and broadly representative vote can be had.”

The Staten Island election marked the first time a group of US workers have successfully voted to form a union in the company’s 27-year history. On Thursday, Amazon was granted a two-week extension on filing the proof to support its objections.

In its filing requesting the extension from the NLRB regional director, Amazon noted that the election at the facility “was one of the largest in the Board’s recent history” and said that its “objections are anticipated to be substantial, both in the number .. . and the scope of the conduct.”

Out of approximately 8,325 eligible voters, 4,785 votes were counted. There were 2,654 votes in favor of unionizing and 2,131 votes against it. Another 67 ballots were challenged and 17 were voided.

The ALU did not immediately respond to a request for comment.

The company first indicated last week that it was exploring filing objections over what it claimed was “inappropriate and undue influence” on the part of the NLRB. Kayla Blado, acting director and press secretary for the NLRB, said in a statement to CNN Business last week: “The NLRB is an independent federal agency that Congress has charged with enforcing the National Labor Relations Act. All NLRB enforcement actions against Amazon have been consistent with that Congressional mandate.”
Amazon said last week that it was “disappointed” with the Staten Island results. While Amazon has repeatedly said in statements that its “employees have always had the choice of whether or not to join a union,” it also spent $4.3 million last year on anti-union consultants and used a combination of texting, on-site signage and Mandatory meetings to convince workers to vote against unionizing.

Last Thursday, the same day the public vote count began for the Staten Island election, the ballots of a do-over union election at an Amazon warehouse in Bessemer, Alabama, were also tallied, but the outcome remains too close to call. There are 416 ballots being challenged, which is enough to sway the result. The NLRB is expected to hold a hearing to review the contested ballots in the coming weeks.

In contrast to the bootstrapped Staten Island effort, the Bessemer drive was done in tandem with the Retail, Wholesale and Department Store Union, an 85-year-old labor union. The original election, held a year ago, favored Amazon, but the results were scrapped after an NLRB regional director determined that Amazon illegally interfered, a decision the company called “disappointing.”

The RWDSU this week filed objections to the do-over election, arguing that Amazon again interfered with its employees right to vote freely in a fair election and it called for the NLRB regional director to hold a hearing to determine if the results should be set aside once more. The RWSDU alleged there were instances of termination and retaliation of union supporters, intimidation and surveillance of employees engaged in organizing activities, and discrepancies with the list of eligible voters provided to the union. The RWSDU also alleged Amazon applied new rules to prohibit organizing, removed pro-union literature, and threatened to close the facility if the union succeeded.

“We’ve said from the beginning that we want our employees’ voices to be heard, and we hope the NLRB counts every valid vote,” said Amazon’s Nantel in a statement about the Bessemer vote.

While these required meetings are a common tactic similarly used by a number of other employers and one that is legally permitted, the union asked the NLRB to review the law. On Thursday, NLRB General Counsel Jennifer Abruzzo issued a memo calling for the agency to reconsider its stance on mandatory meetings of this nature.

Amazon, which previously told CNN Business the RWDSU’s complaint has no merit, declined to comment on Abruzzo’s memo.

The battle over treatment of workers inside Amazon’s facilities is widely viewed as central to the future of work in the United States. The company is the nation’s second largest private employer and is known for its heavy emphasis on automation and tracking of productivity. Its high turnover rates, on-the-job injuries and increased worker activism, have also drawn significant attention to its workplace conditions in recent years.
In late May, Amazon shareholders are expected to have the opportunity to vote on a resolution for an independent audit of the company’s warehouse working conditions, according to a Reuters report on Thursday.