3 hurt when Tesla crashes on top of ambulance 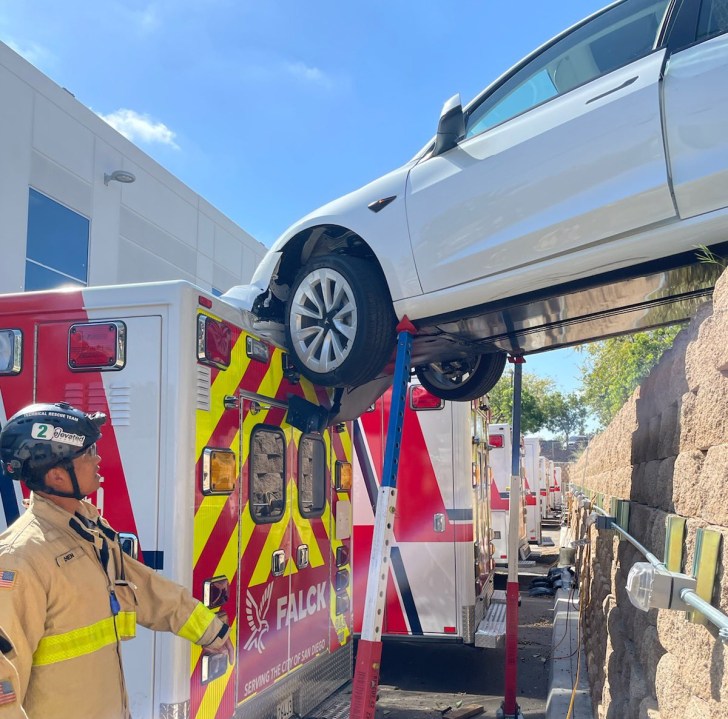 SAN DIEGO (KSWB) — Three people were hurt Wednesday when a Tesla crashed through a fence and landed on top of an ambulance in a San Diego parking lot, officials said.

The crash happened around 9:40 am just south of the Kaiser Permanente hospital in Kearny Mesa, California, according to San Diego Fire-Rescue.

It wasn’t immediately clear how the driver lost control, but it appeared they may have accelerated out of a parking space instead of backing up, officials said. The car careened down a small embankment, crashed through a fence, and landed on a parked ambulance in the lot below.

Photos shared on the fire department’s Twitter account showed the Tesla sitting on top of the downed fence, with its front half balanced precariously on the ambulance and its back half still on the hill. The car’s front wheels and front two doors were suspended in the air, bridging a gap between the ambulance and a 7- or 8-foot wall.

Authorities told three people inside the car to stay put until a technical rescue team could reach them, SDFD’s Mónica Muñoz told KSWB by email. Rescuers eventually removed the trio, and they were taken to the hospital with injuries. Officials did not share further details about their status.

Crews then had to determine how to safely remove the car from the ambulance. Fire officials said they were concerned about potentially damaging the electric vehicle’s battery. The technical rescue team used tools to brace the car while they figured out what to do next.

By about 11:45 am, the crews had lifted the car off the other vehicle and back onto the ground, running thick straps through each window and across the ceiling of the Tesla, then pulling it up with a crane.

The ambulance involved in the crash was one in a long line of emergency vehicles parked in the lower lot.

No one outside of the Tesla was hurt in the crash, officials said.