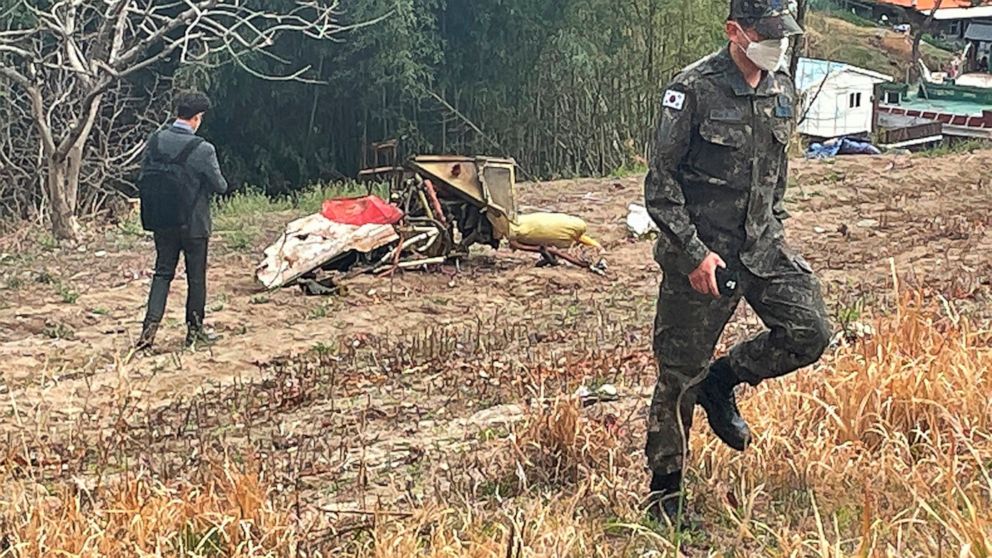 Two South Korean air force planes have collided in mid-air during training and crashed near their base, killing all four people aboard the aircraft

SEOUL, South Korea — Two South Korean air force planes collided in mid-air during training and crashed near their base on Friday, killing all four people aboard the aircraft, officials said.

Both planes were KT-1 trainer aircraft — South Korea’s first indigenously developed planes — that took off from an air force base in the southeastern city of Sacheon one after another for flight training, the air force said in a statement.

The collision occurred about five minutes after the first aircraft took off and about 6 kilometers (3.7 miles) south of the Sacheon base, the air force said.

Two people — a trainer pilot and an instructor — were aboard each of the two KT-1 aircraft. All four ejected from the planes but were later found dead, the air force statement said. The four victims were identified as two first lieutenants and their instructors, both civilian employees at the air force.

The air force said it will launch a task force to investigate what caused the collision.

The air force said the crashes didn’t cause any civilian casualties on the ground and it was trying to determine if any civilian property was damaged.

Lee Seong-gyeong, a Sacheon police official, said a passenger car was destroyed after being hit by wreckage but added that officials weren’t immediately aware of any other notable damage to civilian property. South Korean media published photos of the mangled vehicle surrounded by scattered machinery parts that were apparently from the planes.

Local emergency officials earlier said three bodies had been found in a mountainous area and a farming field in Sacheon. They said they believed the planes crashed into a mountain because a fire erupted there.

Local officials said three helicopters, 20 vehicles and dozens of emergency workers were dispatched to the presumed crash sites. They said a number of military personnel were also sent there.

Friday’s incident came after an air force pilot died in January after his F-5E fighter jet crashed near Seoul, in an incident that prompted calls for the country to swiftly retire those planes, which had been in operation since the 1970s. The air force after investigating the crash said last month it was caused by a damaged pipe that caused fuel to leak into the engine, which caught fire during takeoff. South Korea reportedly operates around 80 F-5E and plans to retire them in phases through 2030.

The KT-1 has been used by the country’s air force since 2000. Sacheon was the site of another KT-1 crash in November 2003 that killed a trainer pilot.

Air force plane crashes and other military-related accidents occasionally occur in South Korea, which maintains a 560,000-member military to deter potential aggression from rival North Korea, which has about 1.3 million soldiers, one of the largest militaries in the world. About 28,500 American troops are stationed in South Korea, a legacy of the 1950-53 Korean War that ended with an armistice, not a peace treaty.